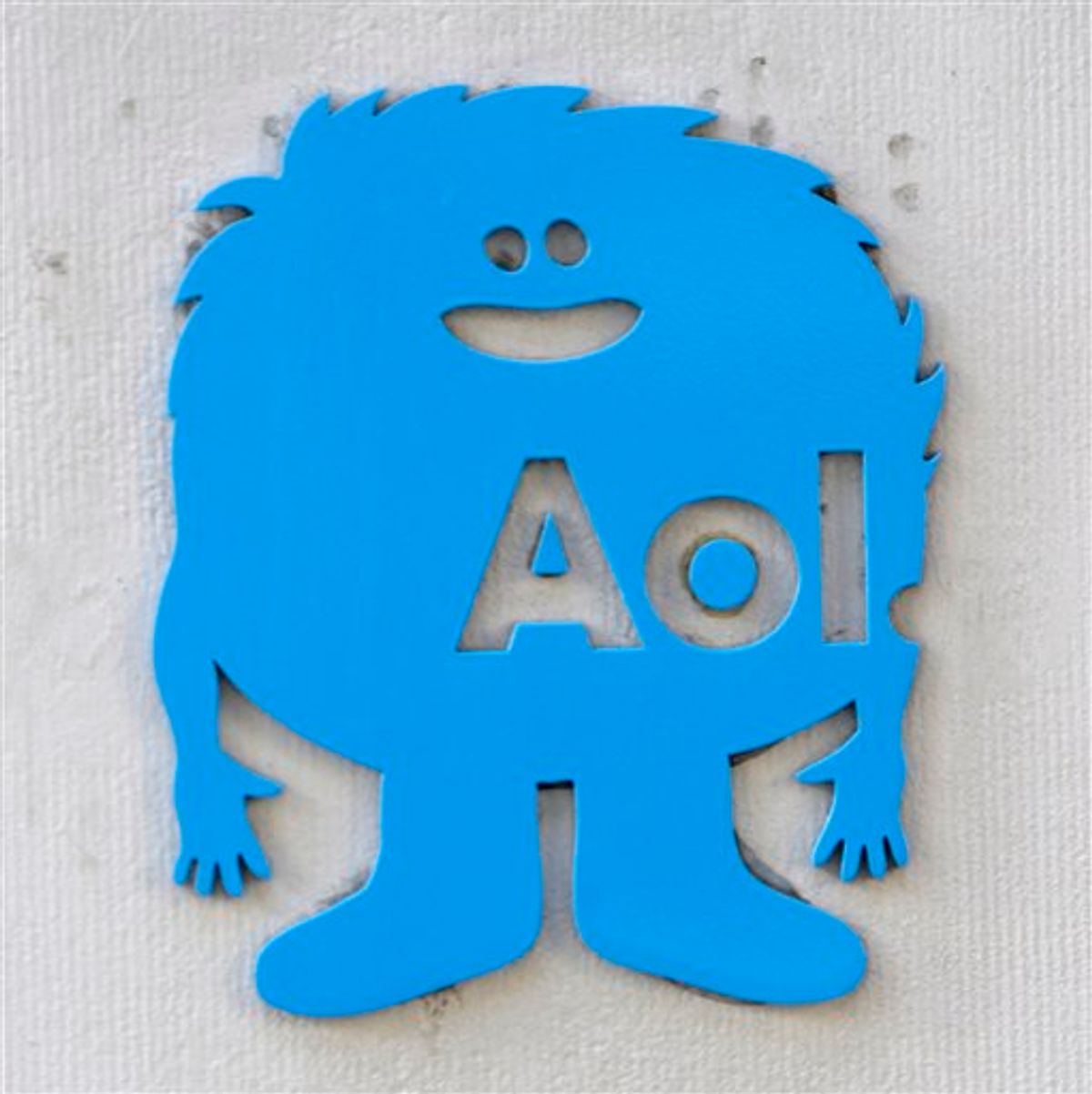 A small AOL placard is displayed on their offices in New York, Monday, Feb. 7, 2011. Internet company AOL Inc. is buying news hub Huffington Post in a $315 million deal that represents a bold bet on the future of online news. (AP Photo/Seth Wenig) (AP)
--

AOL Inc.'s $315 million deal to buy news hub Huffington Post signals that it is serious about building its profile as a media company as its legacy dial-up Internet business dies away.

The acquisition announced Monday is AOL CEO Tim Armstrong's most aggressive play so far as he tries to reshape a fallen Internet icon and boost efforts in news and online advertising. It is the largest purchase the company has made under Armstrong, a former Google advertising executive hired by AOL to engineer a turnaround.

The Huffington Post ranks as one of the top 10 current events and global news sites and draws 25 million U.S. visitors each month. It has built its popularity by compiling news from a wide selection of other media outlets, with links to articles and video on everything from politics to style to food. The site combines that type of aggregation with original work by its own small staff and blog posts from celebrity contributors who work for free in return for a platform to express their opinions. Bill Gates has written for Huffington Post, along with President Barack Obama, Robert Redford and several university presidents.

Although some analysts say that AOL is paying a lot for the Huffington Post brand, Benchmark Co. analyst Clayton Moran believes the price isn't a huge hit for the company in the short term, especially since it helps put to rest any question that AOL is now an online media company. Bringing Huffington Post to AOL gives it access to quality content and will drive new users to its site, replacing those the company has lost over time, he said. And the price is essentially "the hiring fee to get Arianna," technology analyst Rob Enderle says. Although he described the purchase as an "out-of-left-field" decision, he thinks the move "could put AOL back on the map."

Huffington Post grew quickly from startup to online colossus. Over time, it launched city-specific pages and developed a roster of sections such as food and books. The work of its 70-person paid staff is augmented by content from news outlets and 6,000 bloggers who write for free. Outsell Inc. analyst Ned May said the Huffington Post "has done a fantastic job of building content creation. And AOL can monetize it."

AOL sorely needs to. The company rose to fame in the '90s with its dial-up Internet service, managing to buy media company Time Warner Inc. in 2001 at the height of the dot-com boom. The corporate marriage never really worked, though, and AOL's main source of revenue began drying up as consumers flocked to speedier broadband Internet connections. After nearly a decade of attempts at integrating the two, Armstrong was brought in to prepare AOL to separate from Time Warner, and the companies split in Dec. 2009.

Gartner analyst Andrew Frank added that the deal is risky in the sense that media acquisitions are inherently risky these days.

"There is a lot of effort ahead for online media to recapture the glory days when media was booming business," he said. "Deals like this offer hope. On the other hand you can't really dismiss the somewhat uneven record AOL has had with acquisitions."

Beyond Time Warner, another of AOL's well-known failed acquisitions was social network Bebo, which AOL bought in 2008 for $850 million and then unloaded two years later to Criterion Capital Partners for an undisclosed amount thought to be a fraction of what it paid.

Regardless, both parties clearly feel optimistic about this deal. In a blog post, Arianna Huffington praised Armstrong's vision for AOL and said they were on the same page as they discussed their ambitions for online news. "We were practically finishing each other's sentences," Huffington wrote. She said the deal was signed at the Super Bowl in Dallas, which she and Armstrong attended.

In an interview Monday, Armstrong said the deal is a "tremendous opportunity" for AOL that brings an influential audience that is attractive to advertisers. The site's visitors and many of its contributors include business leaders, doctors and university presidents, he said.

"Last year was about the turnaround; this year is about the comeback," he said.

Armstrong has been trying to turn AOL into a go-to place for a wide variety of news since he was hired to revamp the company in April 2009 while it was still a part of Time Warner. The makeover is designed to give people a reason to visit AOL's websites more frequently to help boost ad sales. AOL had just a 5.3 percent share of the U.S. display advertising revenue in 2010, down from 6.8 percent in 2009, according to eMarketer. Facebook, meanwhile, accounted for 13.6 percent of display revenue last year, up from 7.3 percent in 2009.

Armstrong also has reduced payroll by thousands of employees through layoffs and buyouts to try to boost AOL's financial performance and stock price. It has been a slog so far. AOL lost more than $780 million last year, largely because of accounting charges, and the company's stock is now worth slightly less than after it was spun off from Time Warner Inc. 14 months ago.

Founded in 2005, Huffington Post is owned by Huffington, Kenneth Lerer and other investors. They will get $300 million of the purchase price in cash. The remaining $15 million will be paid in AOL stock.

On a conference call with analysts, AOL Chief Financial Officer Arthur Minson said the company expects Huffington Post will generate $50 million in revenue this year, with a profit margin of 30 percent. By comparison, AOL drew $2.42 billion in revenue last year. About 53 percent came from ads, and most of the rest from its dwindling base of dial-up Internet subscribers. Minson said the deal will save AOL $20 million a year by allowing it to eliminate operations that overlap with Huffington Post.

If it wins regulatory approval as expected, the transaction would likely close in late March or early April.