From Egypt to China: If global warming leads to revolution, the rest of the 21st century will be a rough ride 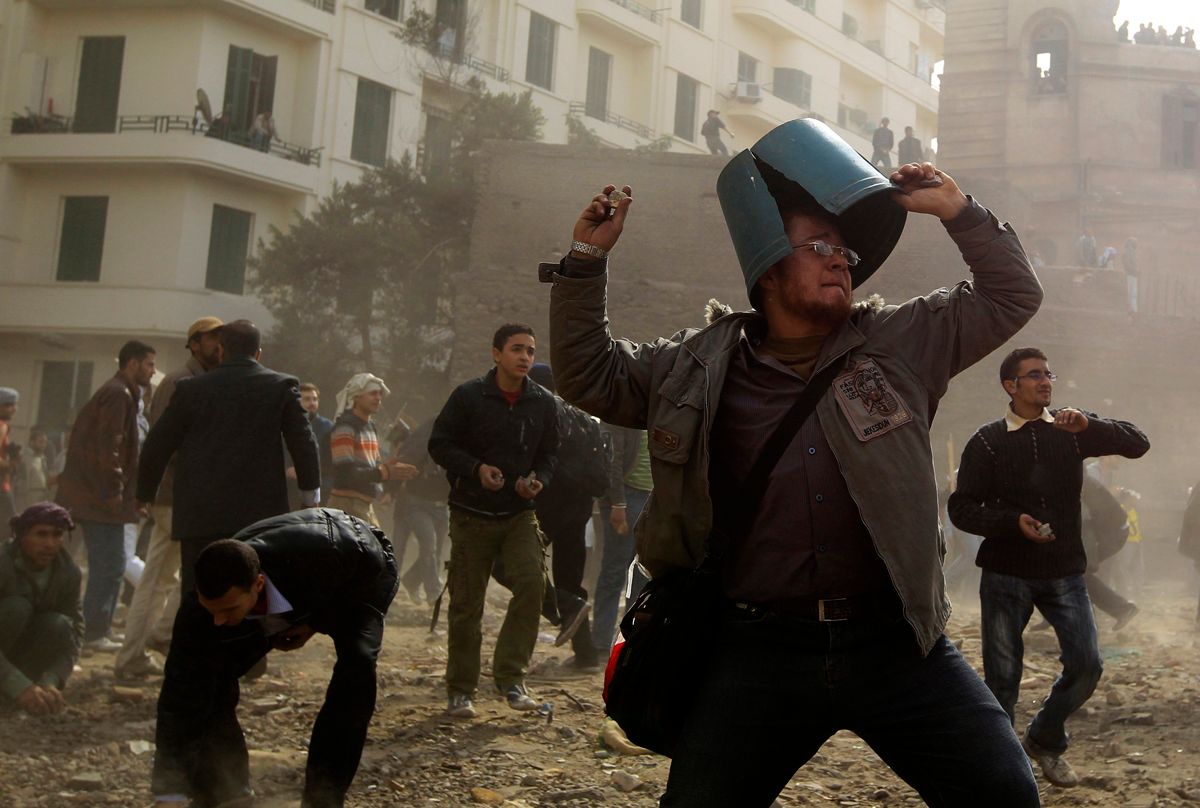 An opposition demonstrator throws a rock during rioting with pro-Mubarak supporters near Tahrir Square in Cairo February 3, 2011. Anti-government protesters and supporters of Mubarak clashed on Thursday near a central Cairo square in a re-run of overnight violence that killed six and wounded more than 800 people. REUTERS/Goran Tomasevic (EGYPT - Tags: POLITICS CIVIL UNREST) (Â© Goran Tomasevic / Reuters)
--

...[T]he evidence does, in fact, suggest that what we're getting now is a first taste of the disruption, economic and political, that we'll face in a warming world. And given our failure to act on greenhouse gases, there will be much more, and much worse, to come.

Apocalypse, again? It seems like just yesterday that a broad-based commodity price spike set off food riots across the world and spawned innumerable disaster scenarios. The global economic recession punctured that bubble and inflation more or less vanished in the developed world. But suddenly, here we are again, only with destabilizing climate change and outright revolution added directly to the mix. The grand scale of the potential disruption is intimidating, and puts the daily political squabbles that obsess U.S. politicians into ludicrous context. While prospective Republican presidential candidate Tim Pawlenty discusses the crucially important issue of how to go about defunding DADT implementation, the entire world seems to be spinning out of control.

It's not quite fair to draw a direct causal line, however, between global warming and Egyptian revolution, or climate change and spiking food prices. The growth in global demand for food probably deserves more attention than the single sentence Krugman devotes to it in his column. All by itself, China is ramping up consumption of foodstuffs on a scale big enough to move world prices without any help from Mother Nature. It's also hard to see food price inflation spawning revolution in Europe or the U.S. -- in societies that have reasonably free elections, a dysfunctional economy tends to result in the bums in power getting thrown out without the necessity for pitched battles in capital cities. At least for now.

But you could also argue that the situation is even worse than what Krugman describes, if you take into account the fact that the underlying causes of growing demand for food are also a driver of higher temperatures. The big emerging economies of the world are getting rich, quick, upgrading their diets and pumping ever more carbon dioxide into the atmosphere.

China, again, is exhibit A. On Tuesday, China's government announced its third interest rate hike since October -- as clear proof as anyone might need of social concern about the possibility of runaway inflation -- a phenomenon most obvious in rapidly rising prices for basic food items. In a bad case of synchronicity, the U.N. also issued an alert on Tuesday "warning that a severe drought was threatening the wheat crop in China, the world's largest wheat producer, and resulting in shortages of drinking water for people and livestock."

"China's grain situation is critical to the rest of the world -- if they are forced to go out on the market to procure adequate supplies for their population, it could send huge shock waves through the world's grain markets," said Robert S. Zeigler, the director general of the International Rice Research Institute in Los Banos, Philippines.

The state-run news media in China warned Monday that the country's major agricultural regions were facing their worst drought in 60 years. On Tuesday the state news agency Xinhua said that Shandong Province, a cornerstone of Chinese grain production, was bracing for its worst drought in 200 years unless substantial precipitation came by the end of this month.

In 2010 China imported 1.3 million metric tons of corn, the most since the disastrous harvest year of 1995-1996. But one industry group, the U.S. Grain Council, is already predicting that 2011 imports could jump as high as an astounding 9 million tons. China also imported a record 54.8 billion tons of soybeans in 2010.

In my visit to China last fall, the sharp rise in the cost of food came up in nearly every conversation. At the same time it was impossible to miss, in cities big and small, a display of conspicuous consumption at restaurants on a scale likely unmatched anywhere else in the world. It's the globe in hyper-accelerated microcosm: Demand is exploding, at the same time that disastrous weather conditions are crushing supply. And while we can't say definitively that the current Chinese drought is a direct consequence of rising temperatures, the correlation between China's changing diet, rapid economic growth, and surging emissions of greenhouse gases is hard to miss. The faster China grows and the more high-protein pork and beef and chicken the Chinese eat, the worse it's going to get.

Never mind the rest of the world -- how the drama plays out in China might be all we need to watch to see whether the globe as a whole can successfully confront the challenge of balancing economic growth with access to affordable food and water and energy while ensuring that climate disruptions don't completely upset the apple cart. Whether or not the Republicans in the U.S. Congress succeed in hobbling the EPA's rudimentary stabs at limiting greenhouse gas emissions in the United States suddenly seems like  an immaterial sideshow. If the past year is prologue, push is coming to shove in Asia, this year.

So no wonder China is censoring references to the Egyptian protests from the Chinese Net. Chinese citizens may not be on the verge of massing on Tiananmen Square to protest the rising price of peanut oil, but a clear revolution of rising expectations is well underway, and there is no good mechanism for the public to express its dissatisfaction if the government fails to navigate the rapids ahead.