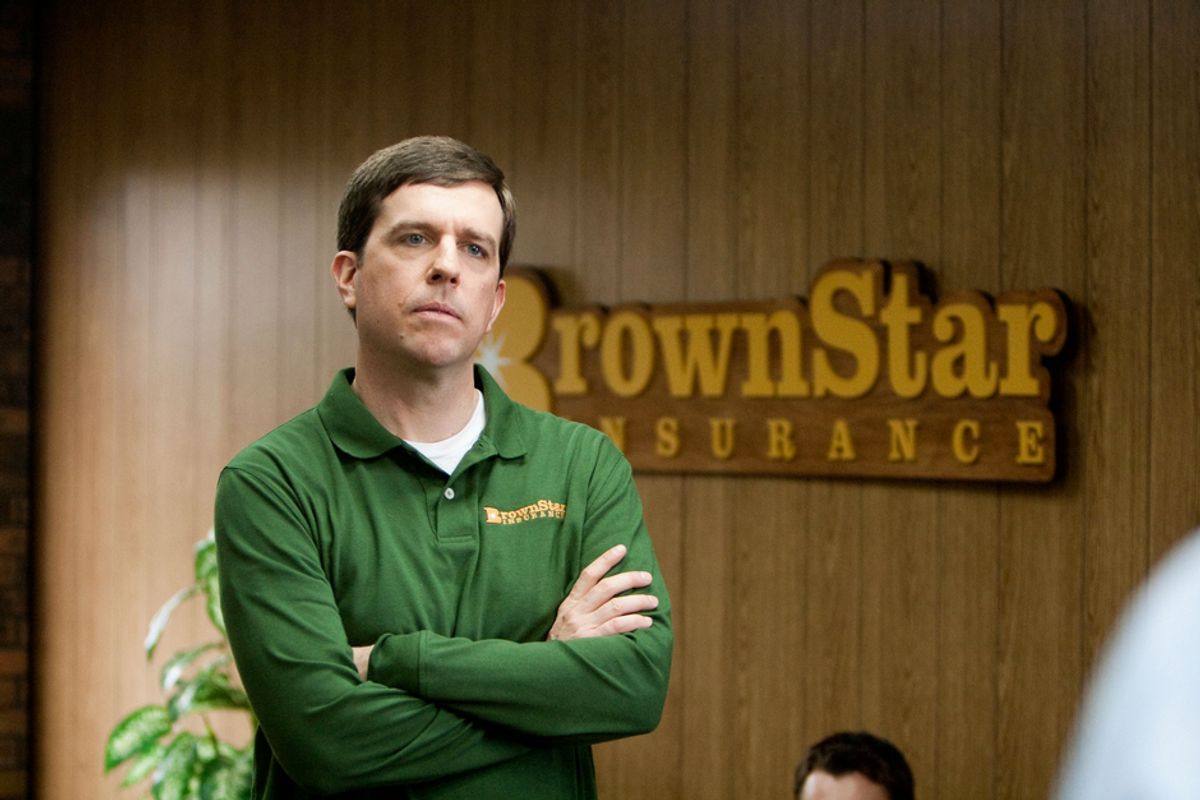 Relentlessly cheerful and arguably a bit too zany, "Cedar Rapids" takes the dudely, profane comic tradition of movies like "The Hangover" and nudges it toward the Middle American mockery of Mike Judge or Matt Groening. Whether you think director Miguel Arteta and writer Phil Johnston are making cruel sport of the motley crew assembled in Iowa's second-largest city ("City of Five Seasons," proclaims the municipal website!) for the fictional American Society of Mutual Insurance convention, or laughing along with their flawed but human characters, is exactly the tension that drives the movie.

Either way, "Cedar Rapids" is often hilarious, although I found it so amped-up and overly broad that I was exhausted before the movie was over. Ed Helms of "The Hangover" and TV's "The Office" stars as the severely unworldly Tim Lippe, a small-town Wisconsin insurance agent whose mettle will be tested in the crucible of Cedar Rapids. If the resulting movie resembles those two influences a bit too much, at least those aren't bad starting points. Tim is 30ish without so much as a pet, and doesn't seem to grasp that his clandestine liaisons with his one-time middle-school teacher (a nifty cameo for Sigourney Weaver!) are cougarish recreation, and not the pathway to matrimony.

Tim is well liked by clients, but as his slime-bucket boss (Stephen Root) at BrownStar Insurance tells him, "When I first hired you, I thought: 'This is a kid who might be going somewhere.' And then you just didn't." But when BrownStar's studly star agent is felled by a tragicomic calamity, it's Tim's turn to step up, go to Cedar Rapids, and come home with ASMI's "prestigious Two Diamond Award" (almost always described with that epithet) that represents exemplary service to clients, community and God.

Fortunately, right about the time I was getting truly sick of Helms' Gomer Pyle act and Tim's implausible, overplayed innocence, he goes to Cedar Rapids and gets sucked into the orbit of the notorious Deanzie (John C. Reilly), ASMI rebel, party animal and all-around speaker of truth to power. Reilly's enjoyable in almost anything, but Deanzie is a masterwork, from the pitch-perfect Upper Midwest accent to the feverish, disheveled divorced-dad hedonism. Throwing his arms around their third roommate, Ronald (Isiah Whitlock Jr.), who appears to be the only black person at the ASMI meeting, Deanzie crows to Tim, "Haven't you ever seen a chocolate-vanilla love sandwich?"

That's only one of several ambiguous gags surrounding Ronald, a buttoned-down, soft-spoken agent from St. Cloud, Minn., who is unmarried and mentions antiquing and community theater among his favorite leisure activities. No one seems to notice, and indeed Deanzie later jocularly accuses him of being scared to show love for another man (either before or after urging the gang toward what he calls the "all-you-can eat pussy buffet"). Whitlock, who once played a state senator on "The Wire," is also called upon for some pseudo-gangsta talk late in the movie, while extricating Tim from a scrape. So Ronald is the focus of all the racial and sexual anxiety of "Cedar Rapids," which is asking a lot from a Minnesota insurance salesman. Again, this is how the movie works: Arteta and Johnston try to push us right to the point of total discomfort with their reckless storytelling, and then make us laugh about it.

I suppose it's progress that this trio of guys is joined by a woman just as bawdy and eager to do shots of Jäger in suburban sports bars as they are. That would be Anne Heche as ASMI femme fatale Joan Ostrowski-Fox (the name is just perfect, isn't it?), a married woman who actually tells Tim, "What happens in Cedar Rapids stays in Cedar Rapids." Heche's delicate performance is in many ways the film's moral center, and I actually wish her character were explored more fully. Of course, there's also Bree (Alia Shawkat), the convention hotel's resident hooker, who introduces Tim to chemical substances and sexual practices he's never even heard of before -- but really, I'm getting ahead of myself. Johnston has a good ear for the quasi-inspirational language of sales culture, and "Cedar Rapids" features a bunch of essentially lovable characters who have to face the most morally compromised situation of all -- being American adults. If it resembles an inflated pilot episode for a raunchy sitcom more than a motion picture, at least it looks like a show that won't bore you or insult your intelligence.

Movies Our Picks The Office The Simpsons