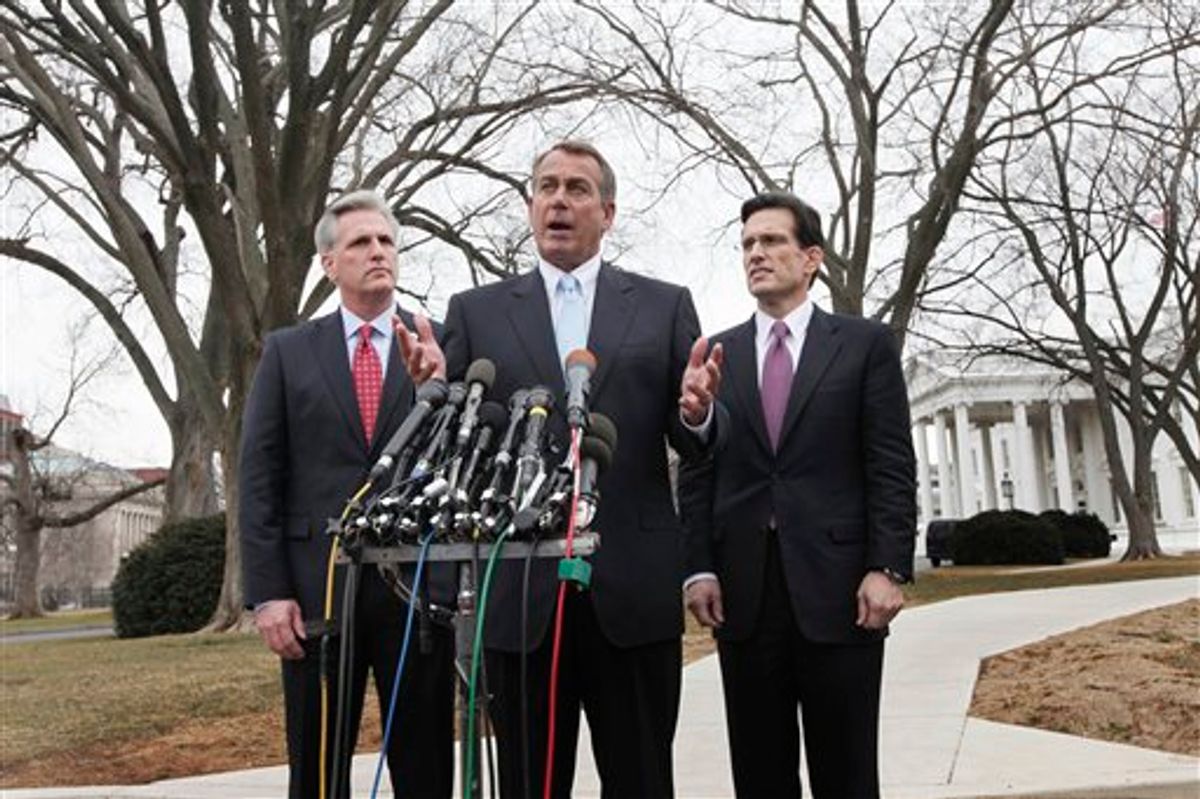 President Barack Obama and the top three House GOP leaders met Wednesday for the first time since Republicans assumed control of the House, agreeing to work together on issues ranging from trade to spending cuts, both sides said.

House Speaker John Boehner, House Majority Leader Eric Cantor and House GOP Whip Kevin McCarthy struck an upbeat, cooperative tone on their way out of the White House lunch, even though fierce battles are brewing over the GOP's plans to cut spending on areas like education and high-speed rail that the president wants to boost.

"It was a very good lunch and we're able to find enough common ground, I think, to show the American people that we're willing to work on their behalf and willing to do it together," Boehner, R-Ohio, told reporters outside the White House. He mentioned education, tax policy, trade, "or even cutting spending" as areas of potential cooperation.

"He thought it was very constructive . that they agreed on cutting spending and reducing our deficit," Gibbs said, "that we should have a broad discussion about, with the American people, the size and the scope of the problem that we face getting our fiscal house in order."

No agreements were reached, though, and neither side offered specific examples following the meeting on where common ground can be found on spending cuts. Gibbs cautioned that Wednesday's meeting wasn't a negotiation session and there was a "long discussion" still to be had.

"I don't think the president believes this can be a one-time-only affair," Gibbs said. He said that the new reality of divided government in Washington requires that "we try on both sides a little harder to understand where the other side is and more importantly to understand where we all agree."

In the wake of the November midterm elections where Republicans took control of the House and made gains in the Senate, Obama acknowledged that he needed to do a better job reaching out to his GOP opposition.

The pledges of cooperation will soon be tested. Obama and the House leaders met not long after House Republicans outlined $35 billion in budget cuts including in areas such as education aid and infrastructure that Obama wants to increase. Gibbs signaled the president's opposition.

"There's broad agreement that we have to change the way Washington works, particularly as it relates to spending. We have to do so in a way that protects important investments so we can win the future," Gibbs said. Obama's 2012 budget proposal, to be released next week, is expected to increase spending on education, infrastructure and other areas -- even while cutting elsewhere -- and Republicans are already girding to oppose the president's plans.

The clearest area of agreement to emerge Wednesday was trade, where Obama is likely to get more help from Republicans than from his own Democrats in moving a pending South Korea free trade deal through Congress. The administration also wants to complete pacts with Panama and Columbia this year so they can be sent to the Hill.

In addition to Obama and the three GOP leaders, Vice President Joe Biden and White House Chief of Staff Bill Daley attended Wednesday's lunch. No other staff was present.