A Republican parade of kooks and shills

Testifying on the GOP's behalf today: A man who calls Lincoln a "horrific tyrant" and an all-star cast of polluters 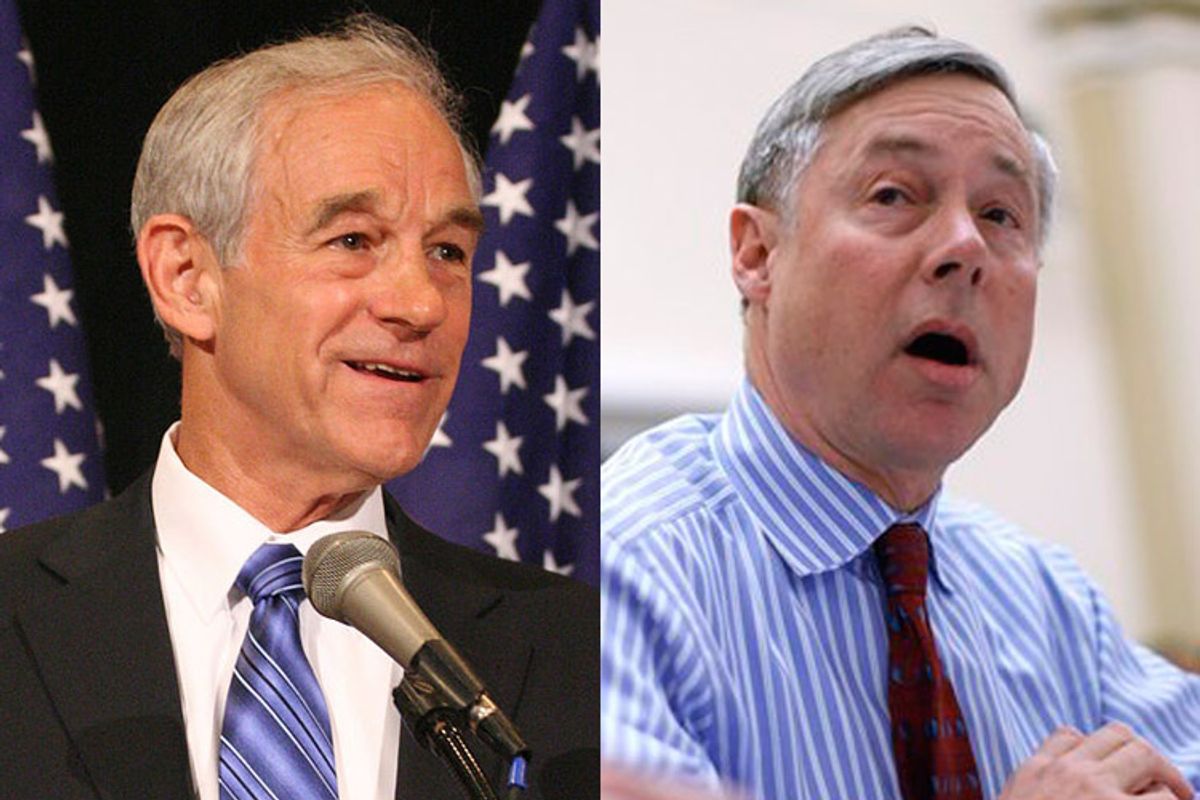 The Republican witness lists at two big House committee hearings Wednesday morning offer us a titillating choice between "experts" who are merely high-order industry flacks or radical thinkers who reside in an alternate and completely whacko dimension.

Mike Konczal, writing at Rortybomb, informs us that one of Ron Paul's choices to testify at a monetary policy hearing today is Thomas J. DiLorenzo, a professor of economics at Loyola University.

He appears to be best known as an author of "Lincoln Unmasked: What You're Not Supposed to Know About Dishonest Abe"... "I saw it as my duty to spread the truth about what a horrific tyrant Lincoln was... I think secession is not only possible but necessary if any part of America is every to be considered "the land of the free" in any meaningful sense..."

Needless to say, DiLorenzo is not a fan of the Federal Reserve and "its legalized counterfeiting operations."

Meanwhile, Wonk Room has the scoop on the Republican lineup of polluters and energy industry shills scheduled to appear at Fred Upton's House Energy and Commerce committee hearing held to discussing the evil of the EPA's attempt to restrict greenhouse gas emissions.

A couple of highlights:

Peter Glaser of Troutman Sanders LLP works with the Washington Legal Foundation, which has received $325,000 from ExxonMobil and $1,255,000 from Koch Industries since 1997. Glaser has fought on behalf of carbon polluters for years, opposing the Supreme Court's Massachusetts v. EPA decision.

Steve Cousins is vice president of Lion Oil, which ranks 27th on the list of top 100 facilities releasing chemicals such as nitrous oxides, sulfur dioxide, particulate matter, carbon monoxide, and benzene into the environment. Cousins is a climate denier, questioning whether human activity is responsible for global warming.

James Pearce is the environmental general manager for FMC Corp., which had to pay the largest civil penalty ever obtained under the Resource Conservation and Recovery Act for repeatedly violating the hazardous waste law at its phosphorus production facility in Pocatello, Idaho.

Mike Konczal worries that the main impact of giving a platform to neo-Confederate paleolibertarians (and yes, I've been waiting all my life to use neo and paleo in the same epithet) like DiLorenzo will only serve to make the not-quite as nutty economic positions of the other House conservatives seem mainstream and sensible. But at least we can take some comfort from the fact that DiLorenzo's views are unlikely to meaningfully influence government policy. As for Fred Upton's witness list ... ladies and gentlemen: I give you today's Republican Party, working as hard as it can to lose the future.

How The World Works Ron Paul The Republican Takeover