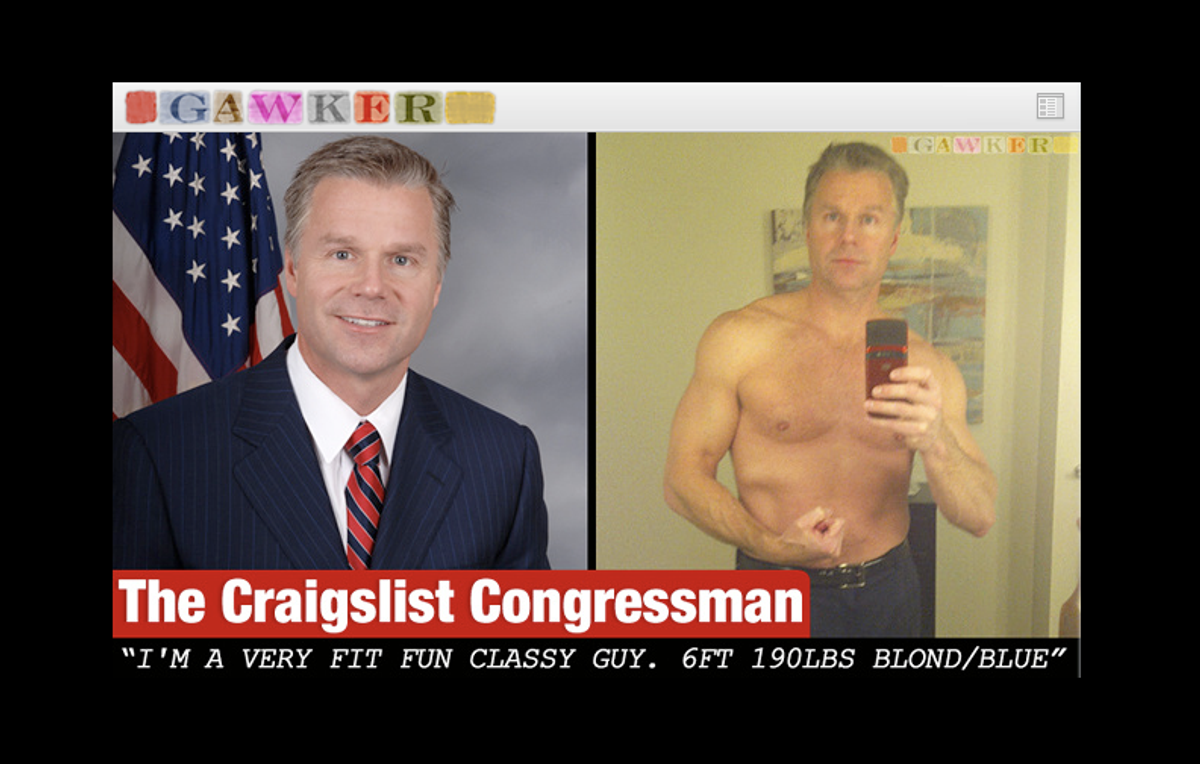 Chris Lee, a second-term congressman from the Buffalo, N.Y., area, apparently made a very stupid decision to e-mail a shirtless image of himself to a complete stranger he met through Craigslist's "Women seeking men" forum. When this was reported on Wednesday by Gawker, which was given Lee's e-mails by the woman with whom he corresponded, the congressman quickly resigned his seat.

We can argue over whether Lee actually needed to quit, but what was really striking about the drama  -- besides the lightning-fast speed at which it all played out -- was the way Gawker itself chose to justify its scoop, in the eighth paragraph of writer Maureen O'Connor's report:

Yesterday, we reached out to Rep. Lee, whose support for "Don't Ask, Don't Tell" and vote to reject federal abortion funding suggests a certain comfort with publicly scrutinizing others' sex lives.

Really? A congressman's apparent use of Craigslist to seek an extramarital sex partner is only news because he also voted against taxpayer-financed abortions and for continuing DADT? It's not news because ... he's a member of Congress stupidly using a gmail account in his own name to send shirtless images of himself to complete strangers? Would Gawker have not run this story if it involved, say, Rep. John Tierney, a married Massachusetts Democrat who supports public money for abortions and who opposed DADT? (To be clear: I'm not implying anything about Tierney; I picked his name because, geographically, he's the closest married male congressman to my hometown who holds both of those issue positions.)

(Ironically, by O'Connor's standard, her own boss, Nick Denton, is guilty of applying puritanical scrutiny to others' sex lives; Denton, according to a New Yorker profile last year, once announced that he is "against abortion, on the ground that, if you’ve got to draw a line somewhere, it might as well be at conception.")

Actually, it seems that Gawker makes a habit of claiming some moral high ground while reporting on the sex lives -- and rumored sex lives -- of public figures. Take, for instance, the extensive, anonymous (well, not for long) first-person essay the site featured late last October, from  a man who apparently spent a night with Christine O'Donnell a few years earlier. That essay, not surprisingly, attracted a flood of pageviews -- and a heap of condemnation. At which point Gawker offered this justification:

Christine O'Donnell is seeking federal office based in part on her self-generated, and carefully tended, image as a sexually chaste woman. She lies about who she is; she tells that lie in service of an attempt to impose her private sexual values on her fellow citizens; and she's running for Senate. We thought information documenting that lie -- that O'Donnell does not live a chaste life as she defines the word, and in fact hops into bed, naked and drunk, with men that she's just met—was of interest to our readers.

Our problem with O'Donnell—and the reason that the information we published about her is relevant—is that she has repeatedly described herself and her beliefs in terms that suggest that there is something wrong with hopping into bed, naked and drunk, with a man or woman whom one has just met. So that fact that she behaves that way, while publicly condemning similar behavior, in the context of an attempt to win a seat in the United States Senate, is a story we thought people might like to know about. We also thought it would get us lots of clicks and money and attention. But we thought it would get us clicks and money and attention because it was exposing her lies.

Again ... really? The news value of the O'Donnell essay was much less obvious than Chris Lee's e-mails. The author of the essay, as noted, wasn't willing to put his name on it and, as Tracy Clark-Flory pointed out, wasn't even claiming that he'd had sex with O'Donnell. But,  Gawker insisted, running such a tawdry, ungentlemanly essay (complete with observations like, "when her underwear came off, I immediately noticed that the waxing trend had completely passed her by") wasn't merely an exercise in driving up pageviews; it was a heroic exercise in accountability journalism.

There's nothing wrong with hooking up with guys in bathhouses; we firmly believe that consenting adults should have as much sex as humanly possible. But Travolta's salacious trips to steam rooms are a little unusual considering the circumstances. Not only has he been married to Kelly Preston since 1991 (and fathered three children with her, including one that died and one that's about to be born any day now), he's also a prominent member of the Church of Scientology, which believes in "curing" people of their homosexuality. Critics of the church claim that information culled during "auditing sessions"—a process in which members clear themselves of "negative influences" and occasionally brings up details of sexual liaisons—is used to keep celebrities in the closet and in the church. Scientology's position on homosexuality, needless to say, is controversial. Indeed the church's hard-line stance has lost them a number of prominent members in recent years.

All of this rationalizing seems a bit silly. The obsession of Gawker's owner, Nick Denton, with pageviews is well-known and well-documented, as is his indifference to the ethical standards that have traditionally defined journalism. All of these stories -- Lee's shirtless picture, the O'Donnell essay, and the Travolta piece -- have one thing in common: They delivered monster traffic to Denton's site. That Gawker can pretend that some grand moral hypocrisy was also at work may help Denton and his staff feel better, but let's be honest: It's beside the point.

To its credit, Gawker's sister site, Deadspin, doesn't even try to play this game. In the last year, Deadspin has attracted enormous traffic with sex-themed stories involving Brett Favre, Rex Ryan, and now Mark Sanchez. For instance, when Deadspin wrote about Ryan and his wife apparently making their own foot fetish video, writer Barry Petchesky merely urged readers not to be judgmental. In other words: We don't actually think there's anything wrong with what we're exposing -- but we're putting it out there anyway, because that's what we do. Gawker might try being just as honest with itself.