"Just Go With It": Adam Sandler, Jennifer Aniston, Nicole Kidman and a sheep 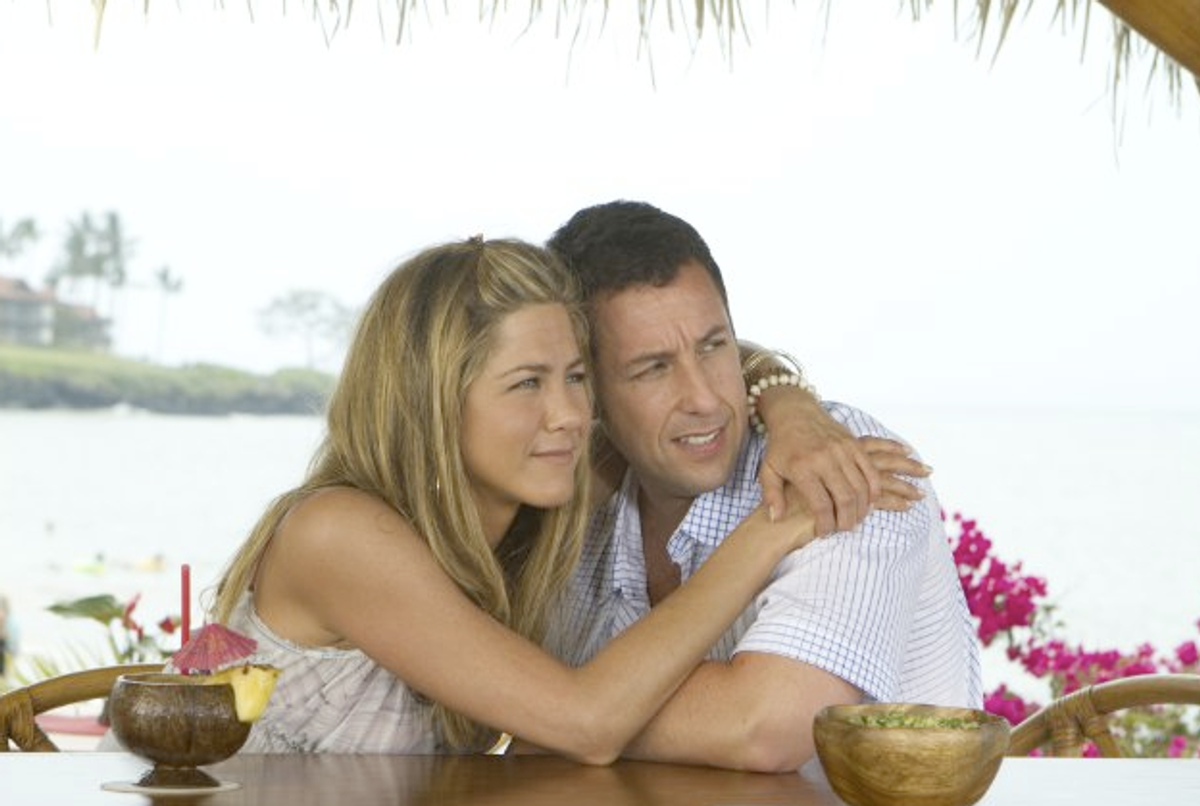 Jennifer Aniston (left) and Adam Sandler in "Just Go With It"
--

"Just Go With It" is an Adam Sandler comedy, which means it bears only a superficial relationship to the customary conventions of moviemaking, and also that there's no use getting all worked up about that. Now, those who collect pop culture effluvia in their heads (such as me) will be interested to know that this farce about a Beverly Hills plastic surgeon who pretends to be married in order to get laid is in some sense a remake of the 1969 Walter Matthau-Ingrid Bergman-Goldie Hawn movie "Cactus Flower," which was itself based on a play by Abe Burrows which was itself based on a French play. (There will be a quiz.) In other words, Adam Sandler, despite all the all-American gags about poop and men getting kicked in the 'nads, is a cheese-eating surrender monkey who hates our freedom. Any further questions?

It's tempting to suggest that Sandler makes such horrifyingly vacuous films, in which absurd gags float around in a killing void resembling outer space, because he is cynical or does not care. I think this is verifiably false. On the contrary, the marketplace has repeatedly proven that the public prefers Sandler in laid-back, recovering-doofus roles where he barely pretends to act, and where such minimal plot and characterization as exist serve only to get us from one ridiculous comic setup to the next. Occasionally Adam gets the drama-school bug and works with some director who isn't his longtime crony Dennis Dugan, and the results, as in Paul Thomas Anderson's "Punch-Drunk Love" or James L. Brooks' "Spanglish," are hotly debated by film critics and ignored by everybody else.

Whatever about its froggy-theatrical-Ingrid Bergman roots, "Just Go With It" is a Sandler-Dugan movie all the way, which means it includes a hula-dancing throwdown between Jennifer Aniston and Nicole Kidman in a Honolulu lounge (officiated by sportscaster Dan Patrick), Dave Matthews picking up a coconut with his ass cheeks, and a small boy taking a crap on an adult man, who then screams about it in a fake German accent. I will not claim that none of those things made me laugh. But I cried too, partly at the realization that Sandler's particular brand of evil genius lies in taking a painfully stupid joke and pushing it so far that it sometimes transforms into its opposite, like some quantum-physics particle or that Hall & Oates song you hated the first 800 times and now totally love.

You want an example? Damn right you do -- I inflicted this movie on myself and now someone's got to pay. For reasons that don't even begin to make sense, the 10-year-old that Sandler's surgeon character pays to pretend to be his daughter in the film (played by Bailee Madison) starts to do her "role" in an atrocious Eliza Doolittle English accent. You know, "Wo' a bloody bovver" and all. It's terrible and not funny and a total overload of toxic fake cuteness. But then a supporting character named Eddie (Nick Swardson) shows up, wearing Coke-bottle glasses and doing the aforementioned fake German accent (he is supposedly called Dolph Lundgren, but he isn't that Dolph Lundgren). And listening to him is so intentionally sub-"Hogan's Heroes" bad, so inducing-death-wish-in-the-audience bad, that it's a positive delight to get back to Bailee Madison addressing people as "guvnor" and "mumsie."

Now, it's not that the parts of this movie are more significant than the whole, it's more like there is no whole (unless you take off the "w"). Sure, there's kind of a plot: Sandler's lizard-like Dr. Danny Macabee convinces his saucy single-mom assistant, Katherine (Aniston), to pretend to be his almost-ex-wife, so that he can explain the presence of a wedding ring in his jeans pocket to Palmer (Brooklyn Decker), his hot new pile of barely legal hotness. In a scene where people are confessing things that make them sad, Palmer bursts out: "Why did 'N Sync have to break up?" And let's show some love for screenwriters Allan Loeb and Timothy Dowling, because that's pretty funny! If you're guessing that Danny will start to have feelings for the more mature Katherine he can't possibly have for bodacious Palmer, you're on the right track, of course -- and those shards of adult emotion, along with a winning and unassuming performance from the oft-dissed Aniston, make "Just Go With It" feel like the work of Ernst Lubitsch, at least compared to such previous Sandler-Dugan fare as "Grown Ups." (That was my personal worst film of 2010. This one won't even be close.)

But I can feel Sandler peering over my shoulder saying "Ernst Lu -- what did you just call me?" And he's right. "Just Go With It" is more than a nonsensical title for a haphazard romantic comedy, it's almost a divine injunction. Watching Nicole Kidman shtick it up in full ice-bitch mode, wearing a hideous dress that seems to have been assembled from the machines that crush Charlie Chaplin in "Modern Times," or Swardson (as not-that-Dolph Lundgren) giving mouth-to-mouth resuscitation to a sheep, is ever so much more the point of this movie than waiting for Sandler and Aniston's characters to reach the perfunctory happy-ever-after. I'm not even going to tell you what Kidman is doing in the movie, or why her character's first name is a euphemism for feces, or why Dave Matthews has to pick up a coconut with those rock-hard glutes. Not because I'm protecting spoilers, or because I'm claiming it's not funny, in an awful way. More because I choose to start the long process of forgetting right now.