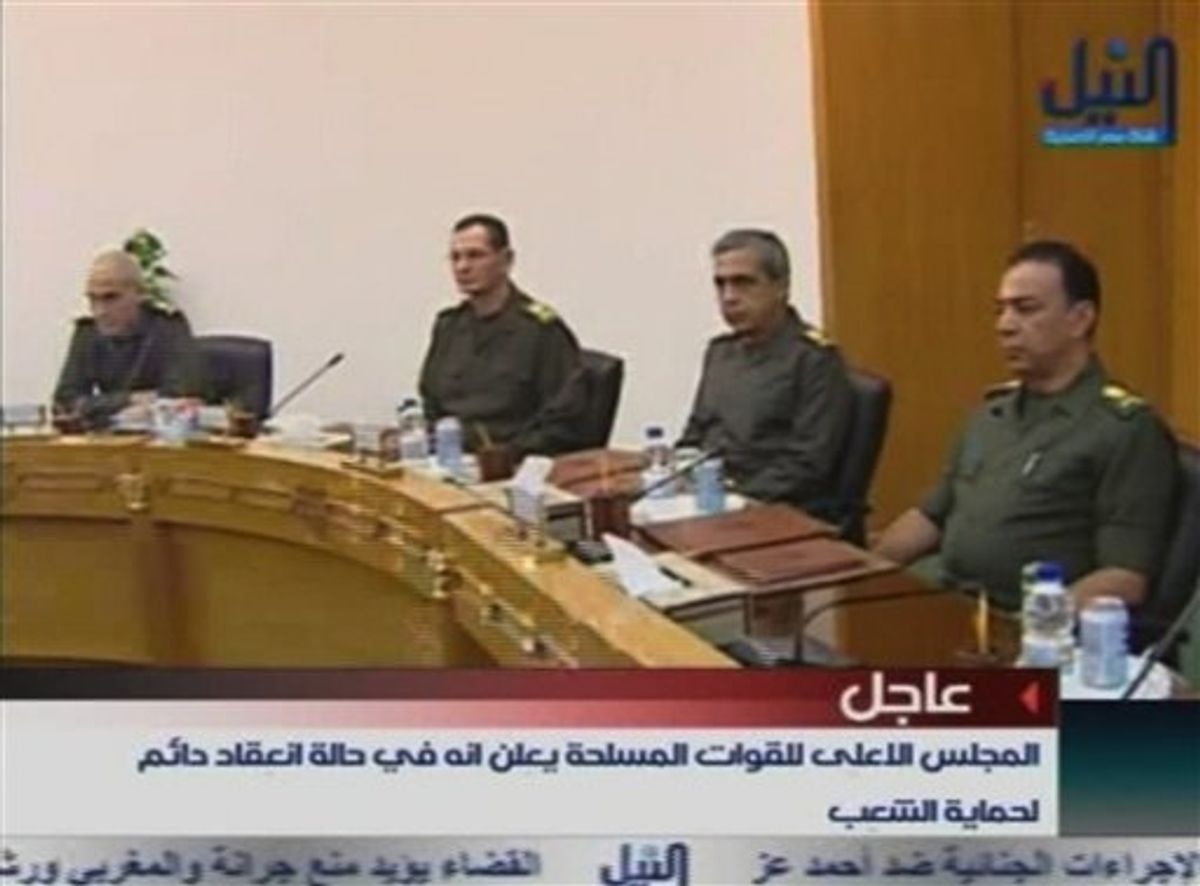 Members of Egypt's military supreme council attend a meeting in this image taken from TV Thursday Feb. 10, 2011. President Hosni Mubarak will meet the demands of protesters, military and ruling party officials said Thursday in the strongest indication yet that Egypt's longtime president may be about to give up power and that the armed forces were seizing control. The military's supreme council was meeting Thursday, without the commander in chief Mubarak, and announced on state TV its "support of the legitimate demands of the people." (AP Photo/Nile TV via APTN) EGYPT OUT TV OUT (AP)
--

Egyptian Vice President Omar Suleiman has told anti-government protester to go home and help rebuild the country in a nationally televised address after President Hosni Mubarak transferred his powers to his deputy.

Suleiman called on the nation to unite and look to the future.

Earlier today, Egyptian President Hosni Mubarak announced he is handing his powers over to his vice president, Omar Suleiman, and ordered constitutional amendments Thursday. But the move means he retains his title of president and ensures regime control over the reform process, falling short of protester demands.

Protesters in Cairo's central Tahrir Square, hoping he would announce his resignation outright, reacted in fury and disbelief.

See video footage from CBC below:

Many watched in stunned silence to his speech, slapping their hands to their foreheads in anger and shock, some crying or waving their shoes in the air in a sign of contempt. After he finished, they resumed their chants of "Leave! Leave! Leave!" The crowd in the square had swelled to severals hundred thousand in anticipation of the nighttime address.

"I have seen that it is required to delegate the powers and authorities of the president to the vice president, as dictated in the constitution," Mubarak said near the end of a 15-minute address on state TV. The article is used to transfer powers if the president is unable to carry out his duties "due to any temporary obstacle" and does not mean his resignation.

He said he would stay in the country and that he is "adamant to continue to shoulder my responsibility to protect the constituion and safegaurd the interests of the people ... until power is handed over to those elected in September by the people in free and fair elections in which all the guarantees of transparencies will be secured."

Mubarak said that the demands of protesters for democracy are just and legitimate, but he adhered tightly to a framework for reform that Suleiman drew up and that protesters have roundly rejected, fearing it will mean only cosmetic change.

He said he had requested the amendment of five articles of the constitution to loosen the now restrictive conditions on who can run for president, to restore judicial supervision of elections, and to impose term limits on the presidency.

He also annulled a constitutional article that gives the president the right to order a military trial for civilians accused of terrorism. He said that step would "clear the way" for eventually scrapping a hated emergency law that gives police virtually unlimited powers of arrest, but with a major caveat -- "once security and stability are restored."