Turkey, Maldives and Denmark leaders have all explicitly asked Mubarak to step down 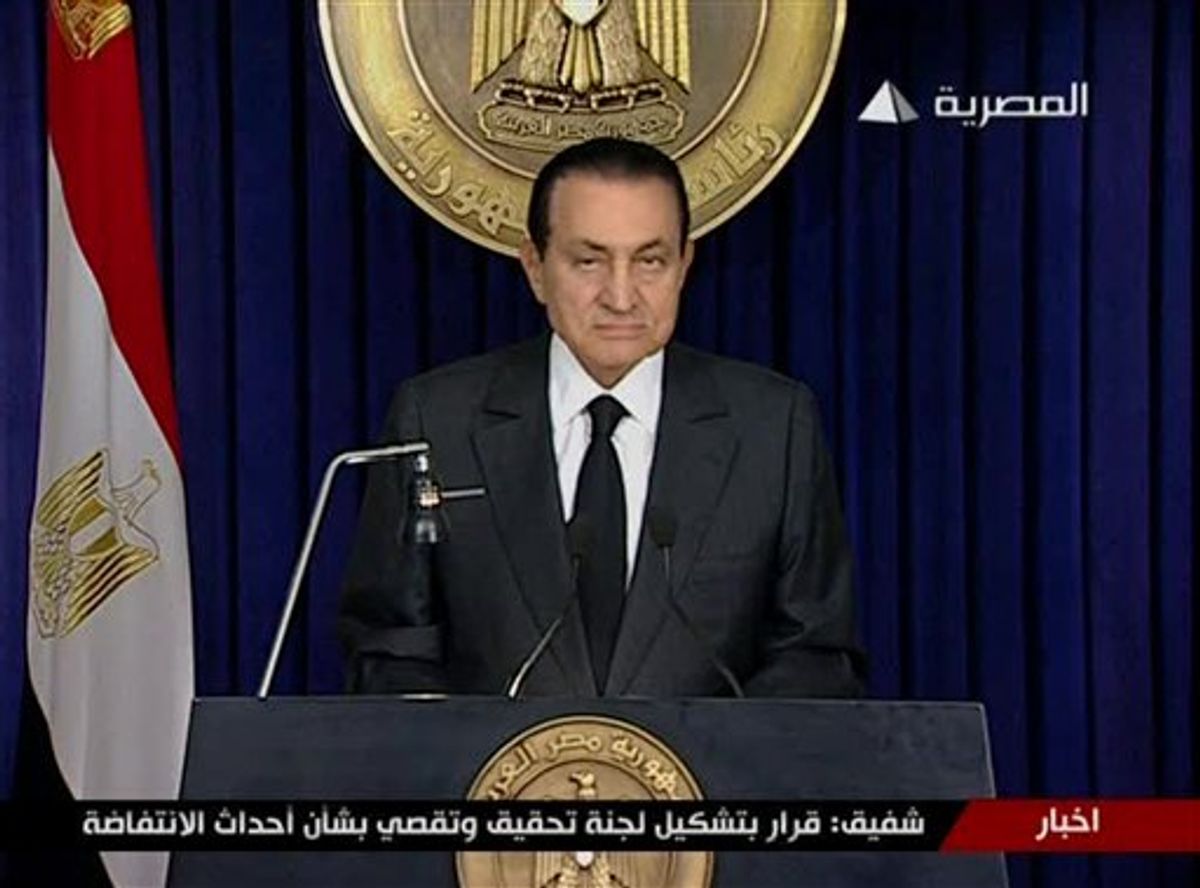 Egyptian President Hosni Mubarak begins to make a televised statement to his nation in this image taken from TV aired Thursday Feb. 10, 2011. Following more than two weeks of protests, anti-government demonstrators have been given hope by official statements suggesting that President Mubarak may step down after 30 years in power. (AP Photo/ Egypt TV via APTN) EGYPT OUT TV OUT (AP)
--

"Mubarak made a huge blunder yesterday," he said, referring to the Egyptian leader's speech late Thursday in which he announced plans to transfer some powers to Vice President Omar Suleiman and promised presidential elections later this year.

It was not immediately clear whether Loekke Rasmussen's comments were a sign of a shift in EU policy toward the upheaval in Egypt. In the past two weeks, the 27-nation union has closely tracked the Obama administration's approach of appealing to Mubarak to implement fundamental changes demanded by the demonstrators, but without calling on him to resign.

The EU has been increasingly concerned about events in Egypt, with officials worrying that events may spin out of control unless Mubarak gives in to protesters' demands.

The European Union has had close relations with Mubarak's regime, despite his iron-fisted rule, as part of its partnerships with other Mediterranean nations. But since the protests started, it has been trying to distance itself from the 82-year-old strongman without damaging its diplomatic and economic ties with Egypt.

In Brussels, EU foreign policy chief Catherine Ashton said Mubarak's defiant speech had "not yet opened the way to faster and deeper reforms."

"An orderly and irreversible transition towards democracy and free and fair elections is the shared objective of both the EU and the Egyptian people," Ashton said in a statement. "The lifting of the state of emergency ... must be implemented as soon as possible."

EU Parliament President Jerzy Buzek said "a new government including all democratic forces is crucial for this transition."

Ashton's repeated efforts to visit Cairo to help defuse the standoff between the regime and protesters have been stymied by Egyptian authorities. Egypt's foreign minister has responded by saying he would prefer not to have any foreign visitors this month, Ashton's spokeswoman said.

In Berlin, Chancellor Angela Merkel's spokesman said on Friday that the disappointment of the Egyptian protesters in response to Mubarak's speech was "understandable."

"Mubarak's announcements are not going far enough to satisfy the people," Steffen Seibert said, adding that the people on Tahrir Square are protesting for ideals "that are also our ideals."

Turkey and Maldives have also asked the president to step down.

Jan M. Olsen in Copenhagen and Kirsten Grieshaber in Berlin contributed to this report.