The right and wrong ways to name a movie

From "Just Go With It" to "Black Swan," which film titles actually draw people into theaters? An expert explains 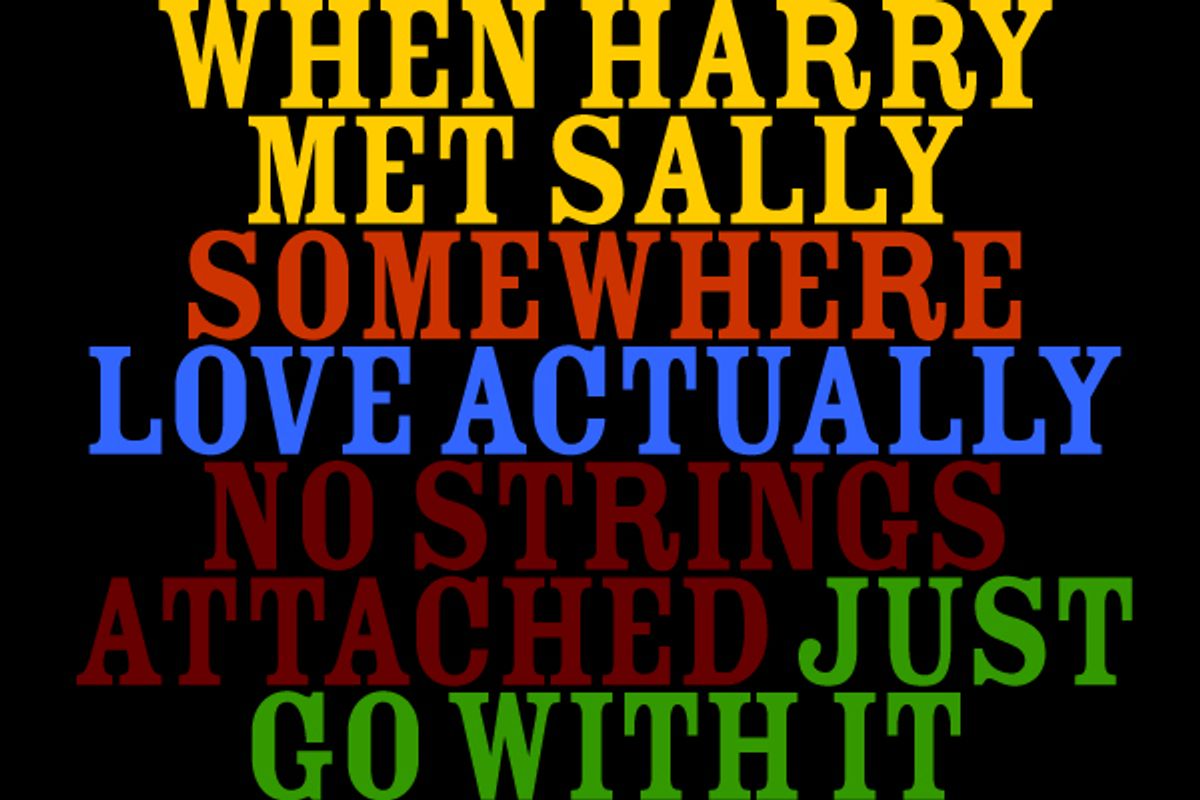 The title of the latest Adam Sandler vehicle, "Just Go With It," gives almost no clue as to what the film is actually about. Is it a creepy thriller about date rape? A comedy about laid-off Nike executives? A drama about an unexpected pregnancy? Without Jennifer Aniston and Sandler's figures emblazoned across its poster art, the movie would be impossible to distinguish from the host of romantic comedies with interchangeable names that have been released over the past decade -- "Love, Actually," "Failure to Launch," "New in Town," "Fool's Gold" and this winter's "How Do You Know." Much has been written about how disappointing romantic comedies have become in the past few years, but has anyone noticed how cryptically generic their titles are?

It's baffling that a studio would want to slap a film it's trying to sell with the most boring, forgettable name conceivable. Is there something going on that we don't know about? And, for that matter, what distinguishes a good movie title from a bad one? To find out, we called up Matthew Cohen, the founder of Matthew Cohen Creative, a company that has worked on the marketing campaigns of 2007 best picture winner "No Country for Old Men," 2008 best picture nominee "The Curious Case of Benjamin Button" and this year's Oscar favorite, "The King's Speech."

What do you make of "Just Go With It" and why do you think that the titles of so many romantic comedies are so impenetrable?

Is it the freshest title in the world? Probably not, but what's good about it -- and this is true of most all romantic comedies -- is that it's inherently optimistic even as it promises some kind of conflict. You want a complication that isn't going to turn people off. It's not that these titles are purposefully vague so much as they're trying to sound as neutral as possible not to alienate audiences. That's why so many are derived from common expressions or aphorisms. "Something's Gotta Give," "It's Complicated," titles like that.

What makes for a great movie title?

A great title is one that immediately elicits viewers' interest regardless of how much they may actually know about the movie. When I was at Miramax, I convinced the studio to drop "J.M. Barrie's Neverland" in favor of "Finding Neverland" if for no other reason than I thought the name J.M. Barrie might not immediately click with audiences. You want your movie's title to grab you.

So you don't think "No Strings Attached" might have gotten more traction if it had kept its louder, original title "F*ck Buddies"?

I think that probably would have turned off more people than it turned on. Natalie Portman has a certain amount of class and up-market appeal and I think there would have been a disconnect with the public if it saw her tied to a title like that. The core audience of that movie is female and you would lose a lot of viewers if they looked through the paper and saw a movie called "F*ck Buddies."

Which of this year's Oscar contenders do you think sound the most compelling?

"Black Swan" is a sensational title because in two little words, you have a concept that plays with your perceptions. We think of a swan as an elegant, white-feathered creature and when you hear the words "black swan," there's something sexy and ominous about it. "The Social Network," on the other hand, isn't arresting so much as it is logical. When I first heard "The King's Speech," I confess I kind of rolled my eyes. No one wants to see a movie about a stammerer. But then a little bit of education tells you that the speech is not the heart of it at all. That's a perfect case of a movie that could have been written off based on its title, but it's so emotionally staggering that it doesn't even matter.

How do you devise alternate titles for the movies you work on? Do you typically wait until the film is completed or are ideas germinating over the course of the film's production?

We often wait until the movie is in the can because you don't want the marketing team meddling in the creative process. But yes, while the movie is in production finding itself, the marketing team often hires writers to do title exploratories. Once the movie wraps, you can start floating ideas to the filmmakers. Landing on a great title demands that you take apart the movie. You have to respect the film's core message and its emotional takeaway and then you start tackling it from those perspectives. You also have to tell yourself that the title has to look good on a poster and it has to look relatable in a 7-inch newspaper ad or a 3-inch online ad. You don't want to look back and say, "Gee, that's too much work," or "That's corny."

How many people have a say in the movie's title and who has the final word?

Of course, you want everyone involved in the movie to be onboard. The producer and the director are key, but if you have a powerful star, you want to make sure that they're not ashamed of the title. It's easy to say that the studio executives make the final decisions because, legally, the movie is their property. But no smart studio will plow ahead without making sure the filmmakers are onboard.

Obviously a good title can't save a bad movie, but can a good movie save a bad title?

A bad movie title can hurt a good movie's marketability but a good title has only a neutral effect on a bad movie. "Michael Clayton" is a great example of a ho-hum title that had a great movie behind it. "Syriana" was another title that was a little tricky to overcome. Obviously, it's all George Clooney's fault.

It's a little on the soft side and not nearly as strong as "Lost in Translation." That's a great title because it has a couple of different meanings. It always helps if your movie title echoes in a number of different directions.

Great title. There's a rhyme and a rhythm to it that will enable you to remember it better. "Sleepless in Seattle" is also a great title because of those alliterative "S's." These kinds of sounds have a tendency to stick to your brain.

I always thought that was a weak title, but the movie was saved by an incredibly charming cast. And let's face it. If your movie title is two words and "love" is one of them, you're speaking pretty forcefully to a female audience. The fraternity house guys may be disinclined to see a movie with "love" in the title, but they probably weren't going to see that movie anyway. By declaring it loudly and proudly like that, you're shoring up your base.

A superb title, almost as superb as the filmmakers' decision not to remain faithful to the Conrad novella. "Heart of Darkness" is a somber, depressing, intellectual idea. The "now" in "Apocalypse Now" gives it a real sense of urgency. It sounds like an action movie, whereas "Heart of Darkness" sounds like a study of madness. You also have to remember that everything comes down to how it's being sold and "Apocalypse Now" was sold as an epic movie with a ton of action. It's hard to envision a trailer for that film ending with a title like "Heart of Darkness."

What about a movie like "A Clockwork Orange"? On first listen, I'm not sure I'd have any idea what it means.

I still don't have any idea what it means. That movie was destined to become a massive hit regardless of what it was called because it was Kubrick's first after "2001: A Space Odyssey." Remember that the movie was actually titled "Stanley Kubrick's A Clockwork Orange." The studio recognized that he was a directorial force and capitalized on that by splashing his name all over the packaging. Of course, the movie's popularity wasn't hurt by the fact that the year was 1971 and that kind of violence had never been shown so boldly on-screen.

Can a filmmaker lose his knack for naming movies? Woody Allen's gone from titles like "Broadway Danny Rose" and "Manhattan" to "Vicky Cristina Barcelona" and "Whatever Works."

You don't find it a little lazy?

It's just a construction that you don't really hear in movie titles. It's quirky but strangely sexy. And then when I learned who was in the cast and that it was a Woody Allen movie, I was in. There's nothing better than a title that breaks the rules.