Kevin Smith: Skinnier -- but not proud

The famously large writer-director sheds 65 pounds. Why is he so embarrassed about it? 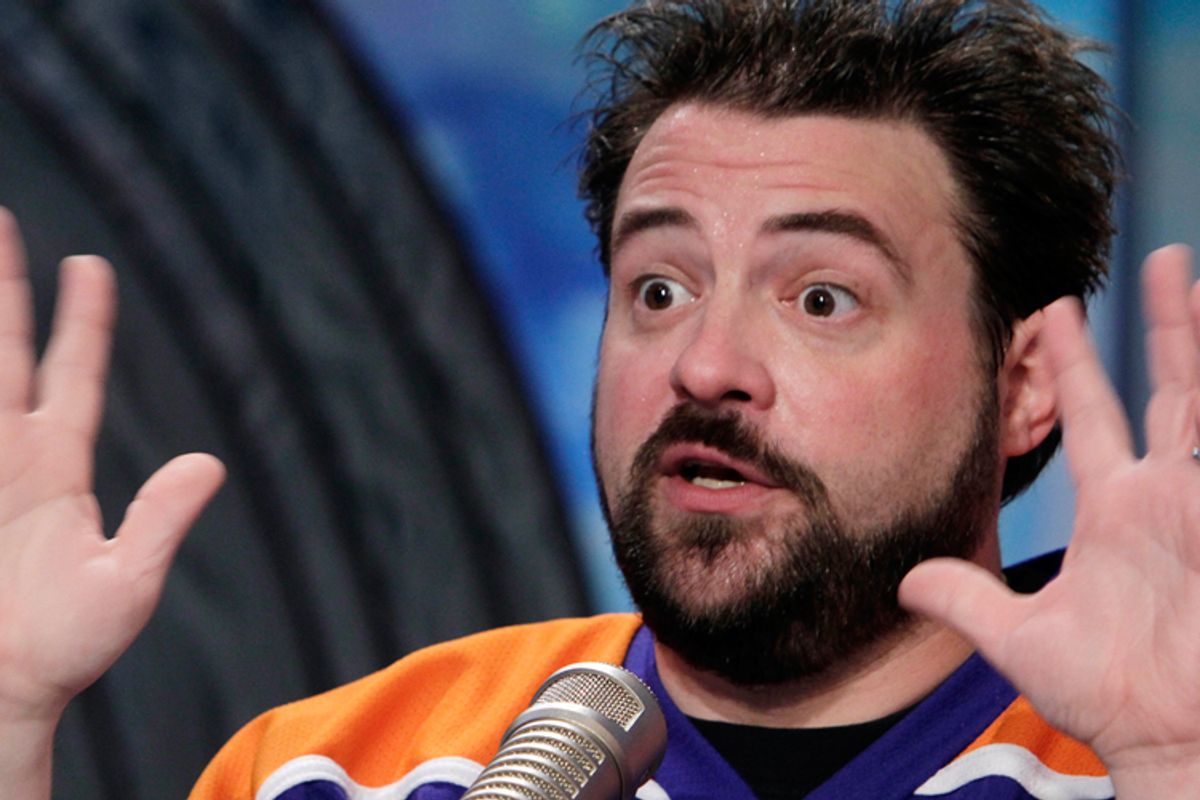 Kevin Smith is no longer too fat to fly. Promoting his controversial forthcoming horror flick "Red State," the rabble-rousing director of "Clerks" and, uh, "Cop Out" has been showing a new side of himself of late -- namely, one with a distinctly lower BMI.

It was a year ago that the "sedentary processed food eater" was famously ejected from a Southwest Airlines flight for what the airline rather lamely described as a "safety concern." Smith's on-the-spot tweets of rage against the airline -- and the way he was forced into a walk of fat shame down the aisle -- became a lightning rod for public opinion. Fellow tweeters poured out their own anguished tales of humiliation, and writers like Kate Harding praised his "righteous indignation on behalf of all the fat people." Others, meanwhile, eagerly expressed the view that fat is a moral failing at worst and not the rest of the world's problem at best. One commenter here on Salon.com summed it up, "If you don't take responsibility for treating your body so badly, who should?"  As Smith later put it, after the incident, "The whole free world was like, yeah, I hate fat people." It's an attitude familiar to anyone who's ever struggled with weight. And when Smith cheekily suggested the "Southwest Air Diet: you’re publicly shamed into a slimmer figure. Crying the weight right off has never been easier!" it seemed a grandly double-middle-fingered gesture to the world.

Why, then, is he suddenly strutting around a stunning 65 pounds lighter? Smith himself seems unsure. On Joy Behar's HLN talk show this week, Smith, still wearing an enormous hockey jersey from his huskier days but looking handsome as hell, admitted: "I feel mixed feelings about losing the weight. I sympathize far more with heavy people than I ever will with thin. I'll never be thin."

His formidable girth has long been a part of his public persona – he boldly called his last one-man stage show "Too Fat for 40."  Yet in it, he speaks of being turned away from the plane by relating how he told the flight attendant, "I'm fat but I'm not too fat ... I'm going to be humiliated." He describes seeing another man of equal girth a few rows back, and fighting the urge to yell, "What about him? He's really fat!" And on Behar's show, he spoke wincingly of the free rein the press took with the term "fat" after he brazenly applied it to himself.

Despite his recent efforts and his presumably changed habits, Smith is reluctant to identify as a paragon of health. Jennifer Hudson, he's not. Instead, he told Behar, "Let's be honest, I've lost 65 pounds, but nobody's going, 'I wanna sleep with you!' They're just like, 'Keep going, you look better.'" As in so many cases in life, though, one's own clearly ambivalent attitude toward one's body doesn't jibe with the public image. Smith's already being hailed in quarters like People magazine as "Weight Loss Winner!" -- as if weight loss is always in and of itself a victory.

It's rarely that simple, especially for people who, like Smith, refuse to see a moral failing in the number on the scale, and who know they've "yo-yoed all my life." It becomes especially complicated when a well-known figure for fat acceptance decides to slim down. Actress Mo'Nique fended off rumors of gastric bypass surgery after she lost weight two years ago, even after telling Oprah that she was "very comfortable at 262 pounds," but decided to lose weight when her husband told her, "Baby, that's too much, and I want you for a lifetime." And model Crystal Renn, who chronicled her dangerous descent into unhealthy dieting in her memoir "Hungry," raised eyebrows last year for showing off a less curvy physique. "I think that by placing a title on my head, which is 'plus-size,' then the picture that these people have created in their mind about what plus-size actually is," she said at the time. "I've basically failed you just with that. Because I couldn't possibly live up to that, and at this point in my life I would have to actually have another eating disorder to live up to that expectation."

Smith -- who two years ago told the Los Angeles Times, "I broke a toilet. That’s how heavy I am. It was definitely me. And that’s a wake-up call!" -- has based his career on being a gadfly champion of the underdog, the kind of man who refuses to slink quietly off an airplane. And in doing so, he's became a symbol of hope and dignity to those who deal with contempt, teasing and unwelcome receptions on airplanes and movie theaters on a regular basis. Maybe that's why he's been so circumspect about why he did it. Is it possible for a man to lose a few pounds for the sake of his health and still keep his indie credibility? Sure, but it's no doubt hard to live in a spotlight where your every ounce is scrutinized as a political statement. And perhaps that's why Smith staunchly refuses to sympathize with the thin, and why he remains so reluctant now to buy a shirt that fits.