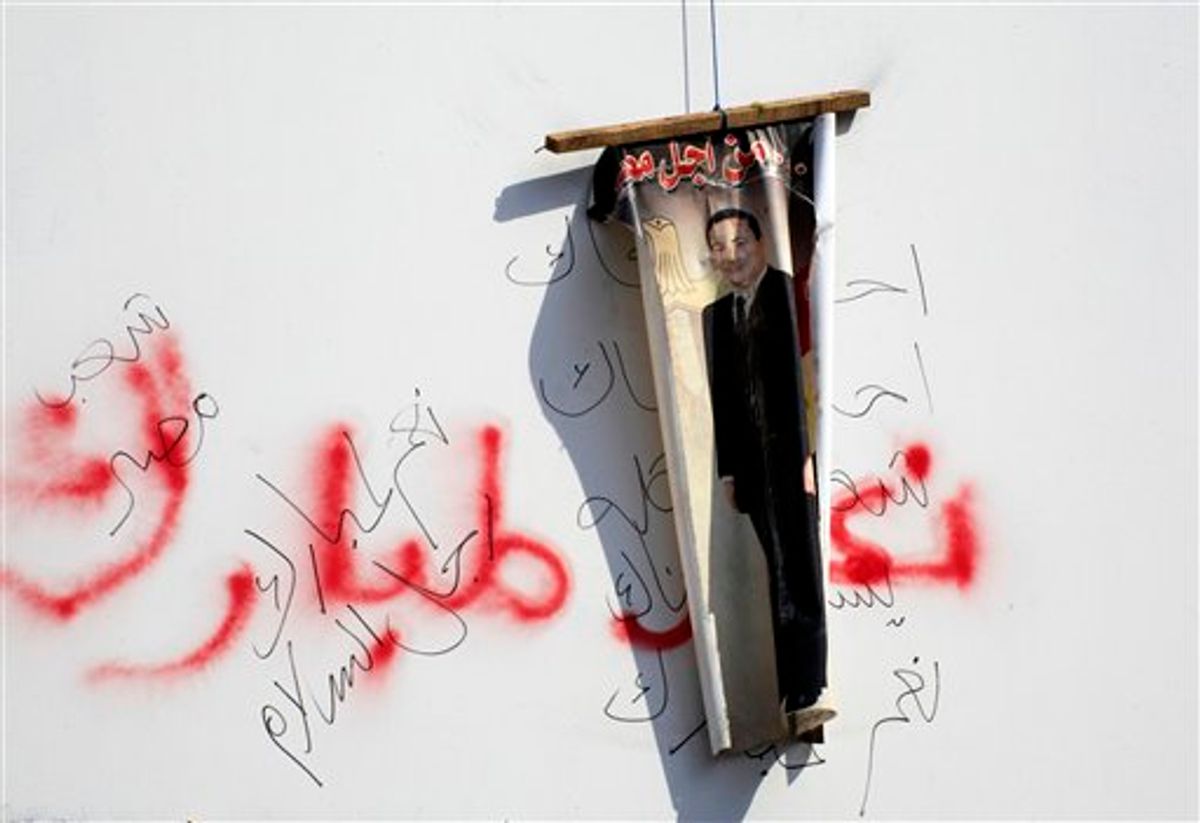 A poster showing President Hosni Mubarak, is hung by anti-government protesters over Arabic slogans supporting Mubarak set by his supporters a week ago in Cairo street, Egypt, Friday, Feb. 11, 2011. Egypt's military threw its weight Friday behind President Hosni Mubarak's plan to stay in office through September elections while protesters fanned out to the presidential palace in Cairo and other key symbols of the authoritarian regime in a new push to force the leader to step down immediately. The statement by the Armed Forces Supreme Council _ its second in two days _ was a blow to many protesters who had called on the military to take action to push out Mubarak after his latest refusal to step down. Arabic read "Yes to Mubarak" (AP Photo/Amr Nabil) (AP)
--

A local government official says President Hosni Mubarak is in the Red Sea resort of Sharm el-Sheikh, 250 miles from the capital Cairo, where protesters are deluging squares and marching on presidential palaces and the State TV building.

The official, who asked not to be identified because of the sensitivity of the issue, said Friday that Mubarak arrived at the airport in Sharm and was greeted by the local governor. Mubarak passed most of his powers to Vice President Omar Suleiman Thursday night, rebuffing the demands of hundreds of thousands of demonstrators that he step down immediately.

Mubarak spends a good deal of time in Sharm, where he has a palace.

The army's show of solidarity with the president was a heavy blow to protesters who called on the military to take action to push Mubarak out after he announced Thursday night that he would hand most of his powers to Vice President Omar Suleiman but remain in office.

The Armed Forces Supreme Council, the military's highest body, depicted itself as the champion of reform in its latest statement. Trying to win the trust of an angry and skeptical population, the army promised to make sure Mubarak lifts hated emergency laws immediately once protests end. Mubarak and Suleiman had only given a vague timetable for ending the law -- when security permits.

Still, the profound disappointment that Mubarak did not step down on Thursday turned to rage on Friday and protests escalated.

"What are you waiting for?" one protester yelled in the face of an army officer outside Mubarak's main palace, Oruba, in northern Cairo, where a crowd of demonstrators grew to more than 2,500. "Did you pledge your allegiance to the president or the people?" another shouted.

It was not known if Mubarak was in the palace, one of at least three in Cairo, or even in the capital. The palace was protected by four tanks and rolls of barbed wire, but soldiers did nothing to stop more people from joining the rally.

The march on the palace were the first by protesters who for nearly three weeks have centered their mass demonstrations in Cairo's downtown Tahrir Square.

More than 10,000 tore apart military barricades in front of the towering State Television and Radio building, a pro-Mubarak bastion that has aired constant commentary supporting him and dismissing the protests. They swarmed on the Nile River corniche at the foot of the building, beating drums and chanting, "Leave! Leave! Leave!" They blocked employees from entering, vowing to silence the broadcast.

Soldiers in tanks in front of the building did nothing to stop them, though state TV continued to air.

"The employees have been perpetuating lies and haven't been broadcasting the real message, feelings, and voice of the Egyptian people," said Mahmoud Ahmed, a 25-year-old graphic designer. "Nobody in Egypt feels like they know what is happening because state television is lying to them."

The protesters shouted, "We are here, where is Al-Jazeera." The pan-Arab news network has aired blanket coverage of the demonstrations, largely positive, and has been targeted by the government.

Other protesters massed outside the Cabinet and parliament buildings, both largely empty, several blocks from Tahrir.

Tahrir Square was packed shoulder-to-shoulder with a crowd that rivaled the quarter-million figure of the biggest protests, stunned by Mubarak's blunt determination not to bend in the face of the biggest mass uprising in Egypt's history, now in its 18th day.

More than 100,000 massed in the main square in Egypt's second biggest city, Alexandria. In the afternoon, the giant crowd marched toward Ras el-Tin Palace, Mubarak's main residence in the city, with thousands more joining their ranks to fill a long stretch of the main seaside boulevard on the Mediterranean.

In Assiut, the main city of southern Egypt, about 40,000 protesters, including thousands who streamed in from nearby villages, marched down the main avenue, chanting for Mubarak to go. Thousands set base around the main security headquarters, guarded by riot police, and others headed toward the provincial government headquarters, guarded by the army. "You go along with your regime, Mubarak," the protesters shouted.

In the multiple demonstrations, protesters vowed they were more determined than ever and continued to try to win military support, chanting "the people and the army are one hand."

"Protesting and striking are fundamental rights and the most powerful available means to bring down the regime, so let's be steadfast and united. Right is above might we shall be victorious," Nobel Peace laureate Mohamed ElBaradei, whose supporters are among the youth activists organizing the protest movement, said in a Tweet on Friday.

In Cairo's Tahrir, a Muslim cleric urged the protesters never to give up in a sermon to tens of thousands of protesters seated in row after row sweeping across the sprawling plaza and over military vehicles.

The military statement, labeled "Communique No. 2" after a statement a day earlier, endorsed Mubarak's plan to transfer some powers to Omar Suleiman.

But it said it would make sure that Mubarak and Suleiman -- both military men -- stuck to their promises for reform. The armed forces, it said, "are committed to shepherding the legitimate demands of the people and to work for their implementation within a defined timetable until achieving a peaceful transition all through a democratic society."

After Mubarak promised to eventually lift the emergency law in place since 1981, the military command gave a more specific timetable, saying they would go once the protests end -- "immediately after the end of the current circumstances."

The law gives police and security forces almost unlimited powers of arrest, which opponents say they have used to crush dissent. Police are also accused of widespread use of torture.

The Supreme Council also called for public services to resume and urged "the return of normal life in order to safeguard the achievements of our glorious people."

Hopes that Mubarak would resign had been raised Thursday when the military council issued its Communique No. 1, announcing it had stepped in to secure the country, and a senior commander told protesters in Tahrir Square that all their demands would soon be met.

Instead, several hundred thousand people watched in disbelief and anger as Mubarak refused to step down in his televised address several hours later.