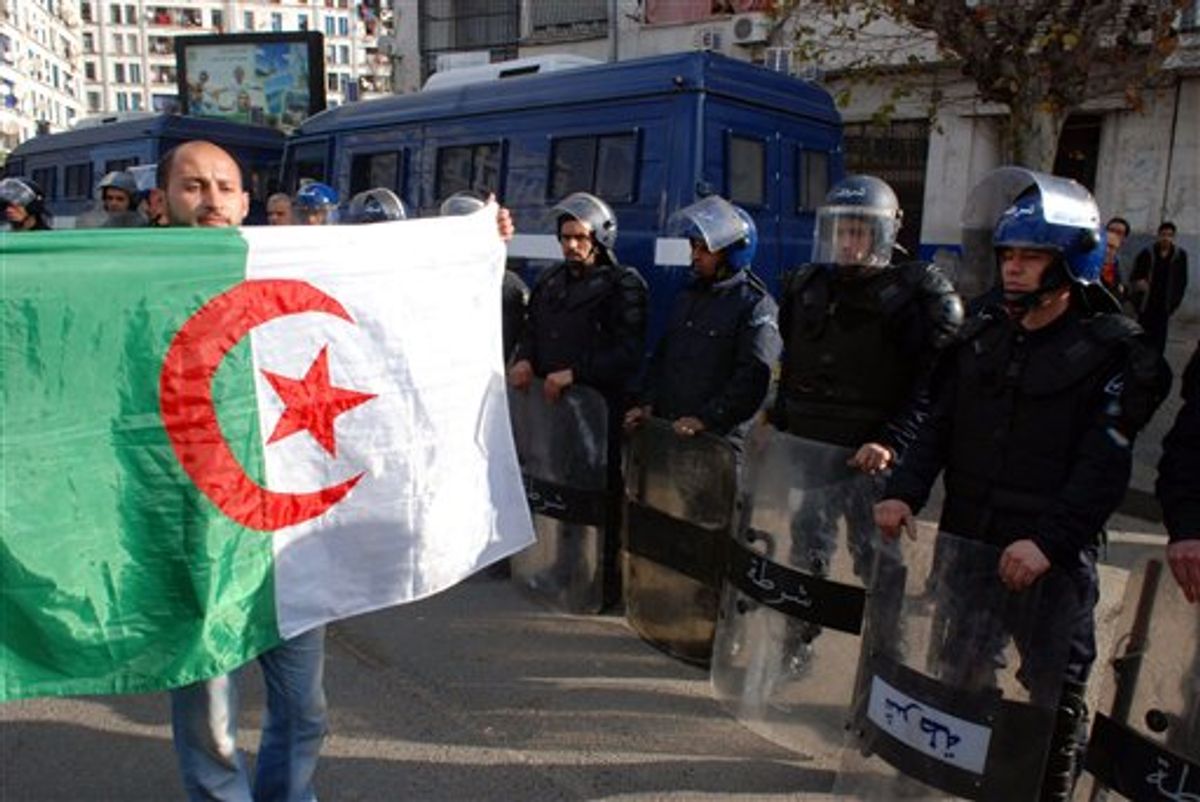 An Algerian protester holds an Algerian flag as he walks in front of Police officers during a demonstration in Algiers, Algeria, Saturday Feb. 12, 2011. Some thousands of people defied a government ban on demonstrations and poured into the Algerian capital for a pro-democracy rally Saturday, a day after weeks of mass protests toppled Egypt's authoritarian leader. (AP Photo/Sidali Djarboub) (AP)
--

Protesters chanting "No to the police state!" and brandishing signs that read "Give us back our Algeria" clashed with baton-wielding police in helmets and visors. Organizers said more than 400 people were briefly detained, but aside from some jostling between police and protesters no violence was reported.

The opposition said demonstrators' bold defiance of a long-standing ban on public protests in Algiers marked a turning point. The regime also attempted to squash organizers by blocking Facebook and Twitter.

"This demonstration is a success because it's been 10 years that people haven't been able to march in Algiers and there's a sort of psychological barrier," said Ali Rachedi, the former head of the Front of Socialist Forces party. "The fear is gone."

Organizers said as many as 26,000 riot police were deployed to try to quash Saturday's rally, but that an estimated 10,000 people succeeded in jostling, squeezing and jumping over the barricades and gathering in the city center before the protest was broken up. Officials put turnout at the rally at 1,500.

Algeria has long been ruled by a repressive government and beset by widespread poverty and high unemployment -- factors that helped foment popular uprisings that ousted leaders of two other North African nations in the past month. Egyptian President Hosni Mubarak was forced to resign Friday after 30 years in power, and a "people's revolution" in Tunisia, Algeria's neighbor to the east, forced autocrat Zine El Abidine Ben Ali into exile on Jan. 14.

Tensions have been high in Algeria since early January, when five days of riots over high food prices left three people dead.

President Abdelaziz Bouteflika hails from a single-party system that has loosened but remained in power since Algeria's independence from colonial master France in 1962. He is credited with helping the nation recover from a brutal Islamist insurgency that ripped the country asunder during the 1990s, killing an estimated 200,000 people.

But opponents say he should have long ago ended a state of emergency declared at the start of that civil strife, and is doing too little to use Algeria's vast oil and gas wealth to help the bulk of its 35 million people.

Last week, mindful of the Tunisian and Egyptian protests, Bouteflika said the state of emergency would be lifted in the "very near future." But the government says the ban on demonstrations in the capital would remain, and as word of Saturday's rally officials repeatedly warned people to stay away.

Billed as a 5-kilometer- (3-mile-) long march through the city center, the event was reduced to an hours-long gathering at the First of May Square by the heavy police presence and barricades erected throughout Algiers and on thoroughfares leading to the capital.

Said Sadi, who heads the opposition Rally for Culture and Democracy, RCD, said the scale of the police deployment was evidence of "the fear of this government, which is in dire straits."

"We're going to continue to demonstrate and to defy the authorities until they fall," Sadi vowed.

Ali Yahia Abdenour, head of the Algerian League for the Defense of Human Rights, said foreign journalists were among those detained Saturday. Abdenour, who is 83 years old, said he was himself jostled by security forces who surrounded him and tried to persuade him to go home.

The rally was organized by an umbrella group for human rights activists, unionists, lawyers and others. Organizers called it to press for democratic reforms without specifically calling for Bouteflika to resign, though some protesters chanted, "Bouteflika out!"

Many Algerians see the 73-year-old president as too old and out of touch, but he handily won a third term in 2009, garnering 90.24 percent of the vote in a race that pitted him against five low-profile challengers.

Critics charge that corruption is widespread under Bouteflika, with officials often siphoning off energy profits for personal use instead of investing them in the economy and jobs.

Algeria's state of emergency was imposed in reaction to a fierce Islamic insurgency, set off by the army's decision to cancel Algeria's first multiparty election in January 1992 to thwart a likely victory by a Muslim fundamentalist party. But opposition groups, noting that violence is now sporadic, say officials use the law as an excuse to ban all political protests.

The revolution in Tunisia was sparked when a young man set himself on fire to protest a lack of job opportunities and harassment by authorities. He later died, and his desperate act sparked copycat self-immolations in the Arab world. In Algeria, some 10 people set themselves ablaze, at least two of them dying.

The country has also had to contend with recent strikes by bank employees and hospital workers demanding better pay and benefits.

(This version corrects that riot police were not heavily armed but carried batons, and that organizers estimated 26,000 riot police, not 28,000.)