When Hollywood booted me out

I was at the height of my screenwriting career. Too bad I was nearly fifty -- and a woman 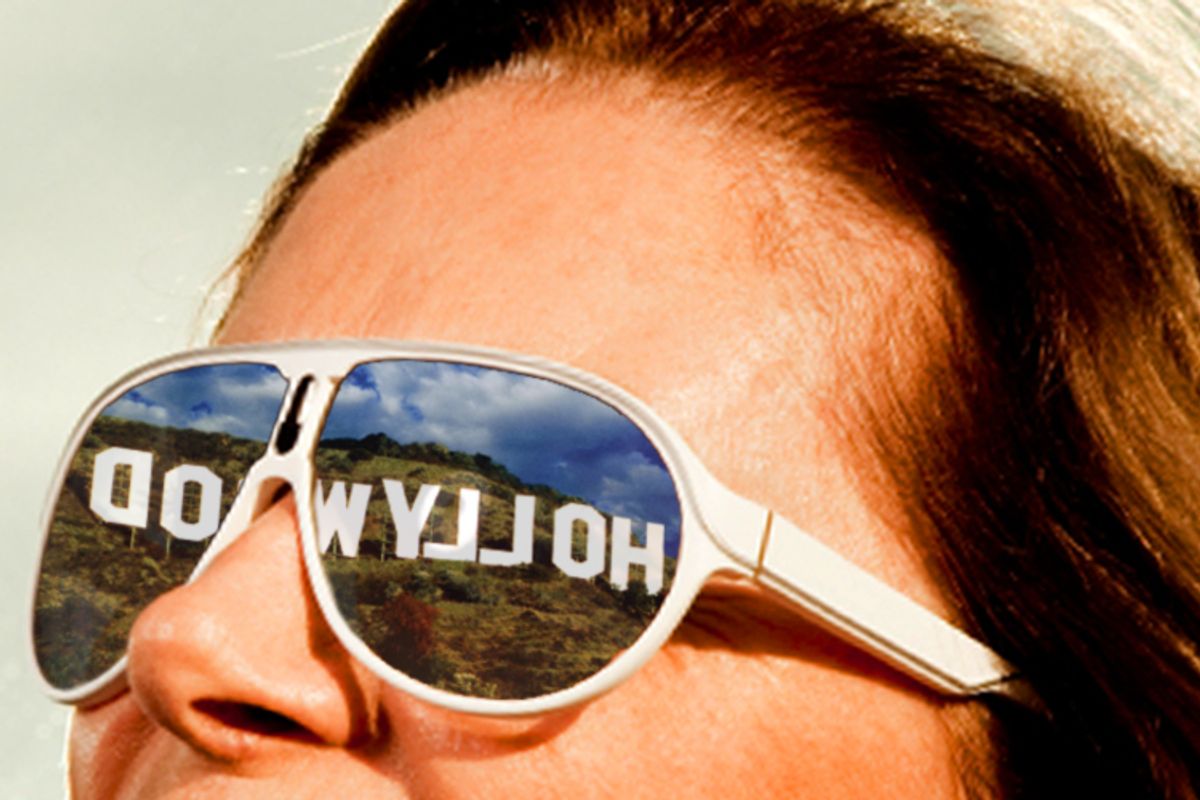 At thirty I got my first job working as a screenwriter for Walt Disney Studios; at forty-seven I was hired for my last job adapting a book for Warner Brothers Studios. I have not worked in the film business in any professional capacity since. By "professional," I mean no one has actually hired me to do anything. And what is really amazing is that as I write this, I have three films in the top thirty-five on iTunes.

There is something about this that is surprising yet com­pletely predictable at the same time. In Hollywood thirty is con­sidered eighty, especially where women are concerned. This attitude tends to affect actresses first, but the second group on its hit list is usually writers, particularly those who write comedy, a genre not very friendly to women to begin with. So, being a female comedy writer, I should not have found it so much of a shock when I suddenly found myself jobless, with few prospects in sight.

The part about my story that is slightly confounding even to this day is that at the time my career came to what I consider a very premature end, I had just come off two big projects, one of which was expected to become a big hit. Every time someone mentioned it, it vibrated big box office, success, stardom for all involved -- and that included me.

It was going to be my ticket to sixty, my $100 million baby, the film that was going to keep me on the train past the giant stop sign of fifty. It was the job I had been waiting all my career to land, and I got it just in the nick of time. Through really hard work and single-mindedness, I landed the plum gig to adapt Sophie Kinsella’s international bestseller, "Confessions of a Shopaholic," for the ultimate producer (in terms of success), Jerry Bruckheimer.

How could this one not succeed? It was as close to a sure thing as you were going to find in a business where sure things don’t exist.

I was set; when I wasn’t in the shower giving my Golden Globe acceptance speech (films like that never get Oscars, but who cares?) I was decorating the house in southern India my DVD residuals would purchase, yelling cut in my directorial debut, or giving Vogue a tour through my well-designed closet. I was living so far into the rosy future that the impending ca­tastrophe of the present wasn’t penetrating any part of my daily life. I did get to work on the script longer than any of the sub­sequent writers did. And I was told that while I had delivered "pretty much what they were going to shoot," they just wanted an "A-list writer on it for a few weeks." Translation: someone more famous than you are. And then they were going to shoot it.

So there I was, hovering in It Could Happen to Her–ville. This tenuous state of being practically on the verge of possibly finally making it really big allowed me to grab my next job. I was so on the brink of maybe being really hot that I was up for both "Gossip Girl" when it was going to be a film and the adaptation of "The Ivy Chronicles," a lovely book about a thirtysomething woman who loses her job and has to take her kids out of private school, start over, and learn to live with less. Though I wanted "Gossip Girl," as I felt it would be the bigger hit, Warner Brothers felt I was much better suited to tackle the story about a woman faced with downward mobility. How’s that for writing on the prover­bial wall? That was my last job, adapting a book about a woman who loses her job.

While I was doing that and someone younger was redoing "Shopaholic," the vibe changed a bit. It does that out there. Holly­wood tends to mimic the underlying San Andreas fault, shifting and moving all the time, always leaving its inhabitants on des­perately shaky ground.

By the time I finished "Ivy" -- which they also professed to like -- I was forty-eight and on my way to forty-nine. I had been working for close to twenty years. The people who were run­ning things were in their late twenties and early thirties; they had their own rules and their little clubs, and they preferred to hire their friends. For the most part they do not like hanging out with their mom’s friends, much less working with them.

In Malcolm Gladwell’s book "Outliers," he talks about how it’s not just having the talent or even the breaks that ultimately leads to big success; it is oftentimes the combination of extraordinary accumulation of experience (ten thousand hours of practice is what he says) but also when you were born. Well, in terms of right place, right age, right time, what the market required, and what I had to offer, by the time I was ap­proaching fifty, things could not have been worse. First off, like many industries, the film business started downsizing before Wall Street started sinking. And then add into the mix the whole reality TV revolution that wiped out hundreds of TV writers who had been making a really good living, including many who had become superstars before fifty. But even a superstar can be left jobless if there are no jobs to be had.

And despite the fact they are always shouting about how many women hold high-level jobs, show business remains one of the most sexist industries. Some cold hard facts: the percent­age of working female writers in film hovers between 17 and 19 percent. And according to a Writers Guild of America study, that figure has not budged since 1999. Television is a shade better, but the numbers there are pretty uninspiring as well: only 26 per­cent of TV writers are women. In a report I read a few years ago, women were such a minority that they were nestled between Es­kimos and Hispanics.

And then you have the ageism. Hollywood has always been famous for kicking out the old, and "older writers" are consid­ered those who are over forty. Being in your mid-forties puts you smack dab in the land of older writer. So fifty would put you somewhere in the land of . . . ancient writer? Writer who has to be wheeled in with a defibrillator and don’t forget to order the pureed carrots for his lunch?

And then comedy ... well, that takes you plummeting to still lower depths. They feel women are much better suited for drama (our tendency toward hysteria, perhaps?), so your chances of employment in TV drama are slightly higher. But I happen to work in comedy and primarily in film, so without that megahit I had nowhere to go but down and, ultimately, out. Humor has always been a guys’ gig, but never more so than now. There was a time when a certain type of female-generated comedy was in vogue, but that was a while ago and has been almost totally replaced by the "Pineapple Express"/"Superbad" genre, and I dare you to find me one woman who would ever get hired to work on those.

Despite the odds stacked against me, I continued to try. I pitched cop movies, soccer dad movies where the dad turns into a superhero, even talking-dog movies, a genre I had dog­gedly avoided for decades. If I was offered anything, I was in there giving it my all. I’m sure an air of desperation started en­tering the room along with me. And if they didn’t know my age, I would announce it before they had a chance to notice. This went on for a good eighteen months.

By then I was a forty-nine-year-old woman desperately pitch­ing a film called "Dan Parker: Attorney at Paw." (The worst part of it is, I came up with that title myself.) The final pitch was at Nickelodeon. I was sitting in a room with SpongeBob SquarePants staring down at me from every wall, trying to sell a dog movie to an executive whose face said he’d rather be playing Xbox. Despite these grim facts, as always, I did the best job I could trying to convince them of the "infinite possibilities" of this project. "Hell, Dan could even be a brand like SpongeBob." (Okay, desperate people say desperate things.) "After all, Dan has a law degree and dogs need defending and SpongeBob is just, well, a sponge." That did it. I had a moment of pure clarity: it was time to leave the party. There is a great John Patrick Shanley quote in which he talks about the point when your craft and your talent merge. Well, this was the point where my age, my gender, my years of experience, and my dig­nity merged.

For the first time in almost twenty years I was truly jobless. Despite what they say, age is something that requires adaptation. That is one of the reasons this whole "fifty is the new thirty" nonsense gets me so irked. At thirty you have so many pieces to choose from, and if those pieces don’t work, you have time to search out and arrange new ones. At fifty that is just not the case. You can find things to arrange, but you have to work with what comes your way or what exists in front of you. You can’t wake up at fifty and decide you want to be a doctor or a lawyer; sure, you can go get your law degree, but can you imagine applying for a job as an associate at the age of fifty-five and then going up for partner at sixty? It’s just not going to happen.

Tracey Jackson was a screenwriter for 17 years. Her new memoir is "Between a Rock and a Hot Place."