On first day as Egypt's ruler, army seeks to reassure 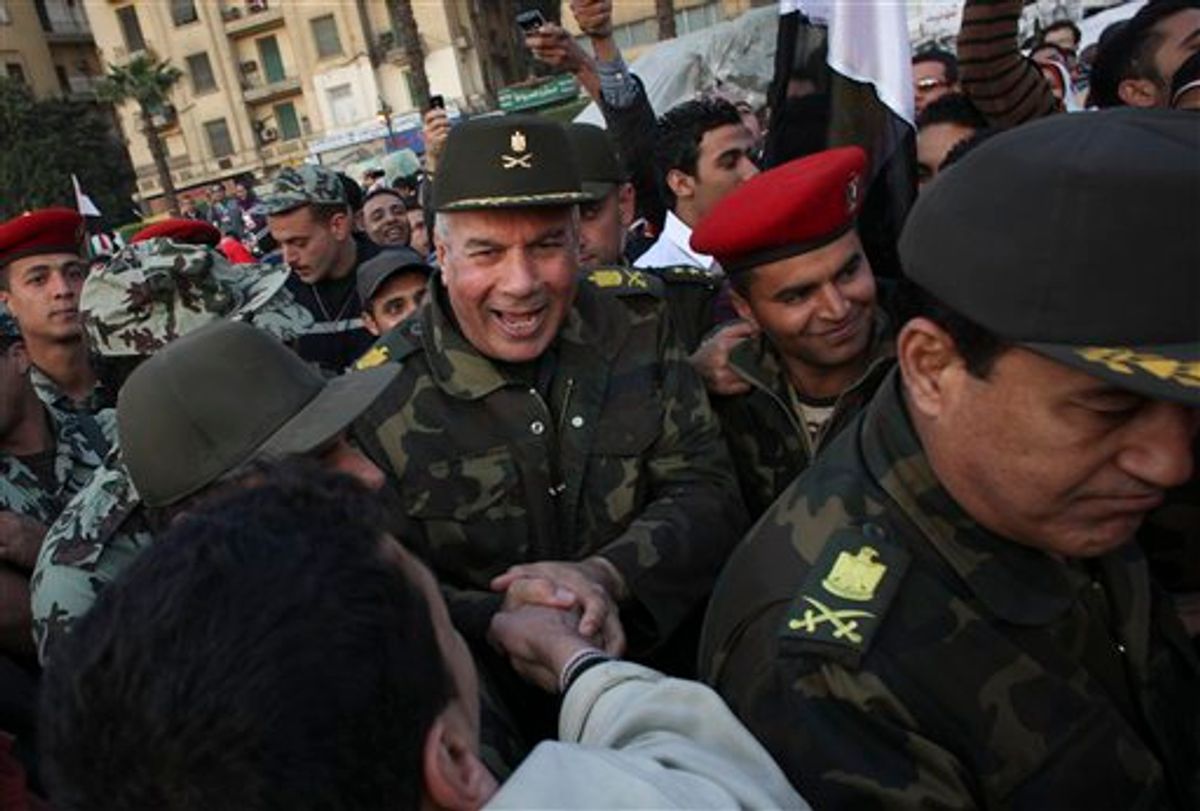 Unidentified Egyptian army major generals greet people as they walk through Tahrir Square in Cairo, Egypt, Saturday, Feb. 12, 2011. Egypt exploded with joy, tears, and relief after pro-democracy protesters brought down President Hosni Mubarak on Friday with a momentous march on his palaces and state TV. The ruling military pledged Saturday to eventually hand power to an elected civilian government and reassured allies that Egypt will abide by its peace treaty with Israel. (AP Photo/Tara Todras-Whitehill) (AP)
--

On Egypt's first day in nearly 30 years without Hosni Mubarak as president, its new military rulers promised Saturday to abide by the peace treaty with Israel and eventually hand power to an elected government. Protesters, still partying at their victory in pushing Mubarak out, now pressed for a voice in guiding their country's move to democracy.

The protesters' first act was deeply symbolic of their ambition to build a new Egypt and their determination to do it themselves: Thousands began cleaning up Cairo's central Tahrir Square, the epicenter of their movement. The sprawling plaza was battered and trashed by 18 days of street battles and rallies by hundreds of thousands.

Even as thousands flowed in to celebrate, broom brigades fanned out, with smiling young men and women -- some in stylish clothes and earrings -- sweeping up rubble and garbage. Others repaired sidewalks torn apart for concrete chunks to use as ammunition in fighting with pro-regime gangs. Young veiled girls painted the metal railings of fences along the sidewalk. "Sorry for the inconvenience, but we're building Egypt," read placards many wore.

"We are cleaning the square now because it is ours," said Omar Mohammed, a 20-year-old student. "After living here for three weeks, it has become our home ... We're going to leave it better than before."

A coalition of youth groups that organized the protests issued their first cohesive list of demands for handling the transition to democracy. Their focus was on ensuring they -- not just the military or members of Mubarak's regime -- have a seat at the table in deliberations shaping the future.

Among their demands: lifting of emergency law; creation of a presidential council, made up of a military representative and two "trusted personalities"; the dissolving of the ruling party-dominated parliament; and the forming of a broad-based unity government and a committee to either amend or rewrite completely the constitution.

"The revolution is not over. This is just a beginning. We are working on how to move into a second republic," said Shady el-Ghazali Harb, the representative on the coalition from one of the youth organizing groups, the Democratic Front.

Protesters were debating whether to lift their 24-hour-a-day demonstration camp in Tahrir. The coalition called for it to end and be replaced by weekly mass demonstrations every Friday to keep pressure on. But many in the square argued to remain. One man on a megaphone encouraged everyone to stay until all their demands were met, while others chanted "the people want the square to be cleared," referring to public grumbling that the protest camp is disrupting life downtown.

Many in the square were pouring love on the military: Families put babies on the laps of soldiers on tanks for photos, crowds cheered when a line of soldiers jogged by for exercise. But there was also realism that the military's ultimate intention is unclear.

"We don't know what they'll do, they might keep hanging on to power," said Muhammed Ali, a 22-year-old archaeology student who argued for the protests to continue.

With Mubarak gone, Egypt's future will likely be shaped by three powers: the military, the protesters, and the sprawling autocratic infrastructure of Mubarak's regime that remains in place, dominating the bureaucracy, the police, state media and parts of the economy. Right now, the protesters' intentions are the clearest of the bunch.

The Armed Forces Supreme Council is now the official ruler after Mubarak handed it power on Friday, consisting of the commanders of each military branch, the chief of staff and Defense Minister Hussein Tantawy. It has not explicitly canceled the constitution drawn up by Mubarak's regime, but the constitution seems to have effectively been put in a cupboard for the time being until it is decided what to do with it.

The military seized power after pleas from protesters, and it has repeatedly promised to ensure democratic change, making it highly popular with the movement.

But on the face of it, the elderly generals are no reformers, and their move to push out Mubarak may have been more to ensure the survival of a ruling system the military has been intertwined with since a 1952 army coup. The deeply secretive military has substantial economic interests, running industries and businesses that it will likely seek to preserve.

The council of generals has said nothing so far about how the transition will be carried out or addressed the protesters' demands.

While it decides that, it sought on Saturday to reassure Egyptians and Egypt's allies abroad.

A spokesman, Gen. Mohsen el-Fangari, appeared on state TV in front of a row of Egyptian military and national flags and read the council statement, proclaiming the military is "looking forward to a peaceful transition ... to permit an elected civil authority to be in charge of the country to build a democratic free nation."

The military statement also said Egypt will "abide by all regional and international treaties and agreements, and commitments" -- reassurance to its top ally the United States that Egypt's 1979 peace accord with Israel is not in danger.

Israeli Prime Minister Benjamin Netanyahu welcomed the statement, saying the treaty "has greatly contributed to both countries and is the cornerstone for peace and stability in the entire Middle East."

Israel has been deeply concerned that Egypt's turmoil could threaten the peace accord, the first between an Arab nation and Israel. But Egypt's military strongly supports the peace deal, not in small part because it guarantees U.S. aid for the armed forces, currently running at $1.3 billion a year. While anti-Israeli feeling is strong in Egypt, few so far seriously call for the treaty's abrogation.

Also, the Supreme Council asked the current government, installed by Mubarak after protests broke out Jan. 25, and provincial governors to "continue their activities until a new government is formed."

It did not say when that would happen, but it seemed to imply the army would draw one up to replace the current one.

The move to keep the government of Prime Minister Ahmed Shafiq in place appeared to be a stop-gap measure to keep the state and economy functioning at a time when the country is trying to recover from the economic fall out of the upheaval.

For days, many businesses and shops were closed, much of Cairo's population of 18 million stayed home under heavy curfew, and foreign tourists -- one of the top sources of revenues -- fled the country. Earlier this week, even as businesses began to reopen on a wide scale, labor strikes erupted around the country, many at state industries or branches of the bureaucracy.

The Supreme Council state asked the public, particularly the millions in the government sector, to "work to push the economy forward," el-Fangari said, an apparent call for everyone to return to work.

The military relaxed the curfew -- now to run from midnight to 6 a.m. instead of 8 p.m. to 6 a.m. -- and the Stock Market announced plans to reopen on Wednesday after a closure of nearly three weeks.

The other force that has hardly been heard from yet is the remainder of Mubarak's regime, which was accused of widespread corruption and authoritarianism but also has the experience in the nitty gritty of running the country, unlike the military.

Members of Mubarak's National Democratic Party still dominate ministries, parliament, state industries and other bodies. The powerful security forces, accused of widespread use of torture and involvement in past vote rigging, remain empowered by the emergency law that gives them wide authorities of arrest.

The regime remainders are battered. Some of its top personalities were purged in Mubarak's last days. Seeking to placate protester demands, the public prosecutor has launched a corruption investigation into four of the millionaire businessman politicians who came to dominate the NDP under the leadership of Mubarak's son, Gamal -- former ministers Ahmed Maghrabi, Rashid Mohammed Rashid and Zuheir Garana as well as ex-ruling party figure Ahmed Ezz.

On Saturday, the prosecutor general asked European countries to freeze the assets of the four. He also announced a travel ban on former prime minister Ahmed Nazif, former interior minister Habib el-Adly and information minister Anas el-Fiqqi, who told state TV on Saturday that he has now resigned his post.

But much of the regime is in place -- too entrenched to call "former" -- and parts of it may resist changes that threaten their position. The security forces, in particular, have hardly been heard from since they were pulled off the streets during the crisis following clashes with protesters and replaced by the army.

Regime figures are certain to play a role in the transition. The question is how much of a role the military will give them and to what degree it will let in other voices.

The protest organizers say they so far have no direct talks with the military. "There are no channels of communications between us and the army but some public figures can help us," said Harb. He said "prominent figures" may play a mediating role.

The coalition that called for the Tahrir protest camp to be lifted and replaced by weekly rallies is highly influential in the square. But they do not claim to be its leaders and often say they can't defy the will of the "revolution." It is made up of several youth activist groups, including supporters of reform advocate and Nobel Peace laureate Mohamed ElBaradei as well as youth from the Muslim Brotherhood.

On Saturday, there was no sign that protesters were heading home from Tahrir, and the tent city set up to accomodate them remained largely in place. If any did leave, they were replaced by crowds streaming in to celebrate. Families with children and revelers filled the square, dancing, singing and chanting, their faces painted in the black-red-and-white colors of the national flag. A rock band with an electric guitar played on a stage, vendors sold popcorn.

One man on the sidewalk had a stand with dozens of wallets that had been taken from pickpockets caught in the square, and people came by to try find their lost property.

At one corner of the square, a memorial to the around 300 people killed in the turmoil was erected, with pictures of some of them on the sidewalk surrounded by velvet ropes. Elsewhere a group of artists lowered a four-meter-tall (13 foot) stab of granite to the ground with a crane, planning to engrave it with the names of the dead as a memorial.

"The day of beautifying Tahrir Square," a giant banner read.

Piles of trash were packed into bags. Young veiled girls painted the metal railings of fences along the sidewalk. Young men re-painted curbs in the black-and-white pattern used in Cairo, then stood in lines to prevent crowds from marring the wet paint. Burnt-out vehicles used a barricades during the fighting were towed away.

Among many was a powerful optimism that in the days ahead the military, which allowed protests to grow without interfering over the course of the crisis, was now sincere in ensuring democratic change.

"I have full confidence in the army, they are the cleanest institution in the whole country and I know they'll do the right thing," said Mustafa al-Husseini, a 25-year-old electrical engineer who left his work 10 days ago to protest in the square. "The Egyptian army is made up of people like us and it's not their job to get into politics. They'll guide us through a peaceful transition."