No. 4: Chang-rae Lee's "The Surrendered"

In the fourth-best sex scene of the year, a teenager crawls into bed with a beautiful missionary wife 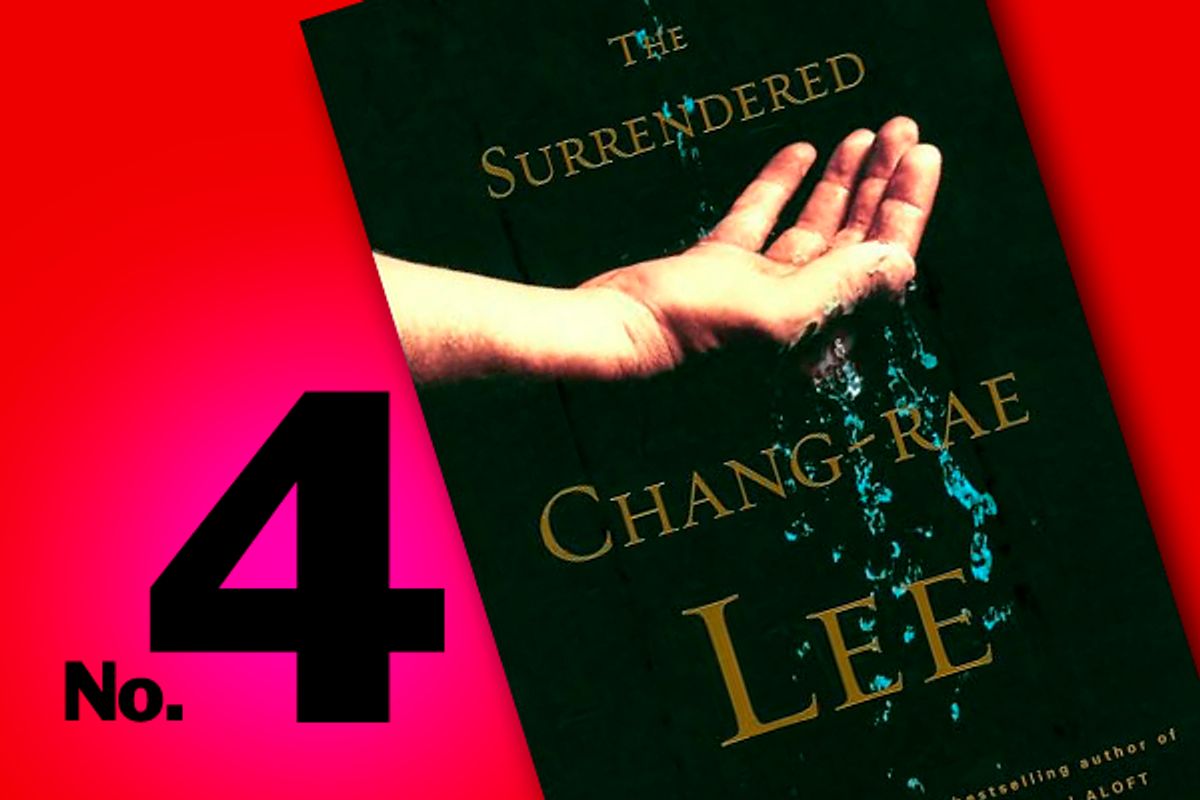 Their rhythm ticked loose and various until suddenly it unjumbled, clicked in. All the while June, tightly crouched in the peerless dark between the wall and a kerosene barrel, was suppressing her own breath, her lungs aching for release, the gleaming painting of their lovemaking begun to screen in her mind. Strangely only her belly felt alive, this yawning breaking emptiness that pushed low and hot while the rest of her went heavy, dead, and it was only when they were finally done and surely fallen asleep that she dared move, her hands and feet tingling and shaking enough that she had to crawl on her elbows from the storeroom.

The following day, having returned to the orphanage, Reverend Tanner sat down next to her during the evening meal. June sat alone now, having agreed not to monopolize Sylvie's company. She had completely forgotten about her conversation with Tanner on awaking that morning, her throat parched, her head fogged and aching, as if, like Hector, she had been drinking all night.

"How goes it, June? Is everything fine?" he asked. Sylvie was at a far table eating with the younger children. Hector was not present, being likely out in the field.

She could merely nod, not yet ready for his questioning. "You don't seem terribly certain," he said, though almost jocularly, as though he didn't in fact wish to hear anything else.

Her memory of the previous night was a stilled curtain but its music now rose up in her chest and brought the skin of her neck to life, her cheeks feeling as though they were suddenly flushed. She thought Tanner would take her aside for an interrogation but all he did was brood a moment with a half-expectant, half-wary gaze and say brightly, "Well, I must be going. Good day, June."

For days afterward she tried to determine what to do. All her considerations foretold only trouble if they should continue, and yet she found herself hoping for Reverend Tanner to spend an evening away again. It was like the hunger she didn't suffer anymore, this grave sensation so resident that it took on its own life, its own existence, was the body within her body that now drew all her energies.

At fourteen her figure was at last changing, after being stunted during the war; since living at the orphanage she'd put on more than eight kilos, mostly on her thighs and hips and on her chest, which the older boys glanced at, but warily, fearing she might catch them and take it as a provocation to fight. She noticed this and sometimes she'd sit back wherever she was and make a show of closing her eyes, letting them look at her for as long as they wanted. She might even press her shoulders back, to accentuate the new fullness. Her doing so wasn't in vanity or pride, or from the slightest interest in any of them; it was pure experimentation, a trial to determine how it felt to be an object of desire, and she found that the more she felt their stares the more her own desire fired, trebled, eventually took on its own reason.

So she stayed silent when in the ensuing weeks Tanner departed on his various trips, and waited for Sylvie to emerge from her cottage in the middle of the night. Whenever she and Hector let the oil lamp burn, June could see them glide over each other with a patience and tenderness that was the opposite of the jerky, horrid couplings she'd had to witness during the war. And though she was startled by the broad, taut ropes of his body, her eye kept resting upon Sylvie's calf, her knee, the way her belly would grow shallow under his kisses and dip far enough below the spur of her hip that she appeared starved herself. She had the loveliest glow, the light seemed to stream from her eyes, from her half-opened mouth; nor did the illumination dissipate until well after they were done, when June saw her open a small black kit and remove a needle from its velvet-lined well. Hector did not take it himself but he helped her, binding her calf with the rubber cord and tapping her heel and then shooting her with the medicine that made her shiver and then go slack, turn a ghostly bone-blue.

When Reverend Tanner was present June would sometimes stay late with Sylvie in the back room. He allowed it enough times that after a while her presence after the generator went out became almost customary. They would all be reading, Sylvie and June in the narrow bed, Tanner in his own out in the front sitting room. He always retired earlier than they, and they took turns whisper-reading aloud by the oil lamp books from the army base library, children's books but also others that Sylvie had chosen for her, "Little Women" and "Great Expectations" and "The Good Earth." Sometimes June would ask Sylvie to read "A Memory of Solferino" to her and she'd refuse at first but always eventually yield, the passages entering them, June thought, with both pain and bliss like the medicine in the kit, and making them cling more tightly to each other.

One night June fell asleep there, and when morning came she awoke to find herself wearing one of Sylvie's nightgowns and tucked in the spoon of her slumbering body. She carefully turned into her and took in the warm, round scent of her hair, the sour-sweeter one of her neck, and masked her eyes in the scant damp of her nightgown; then on succeeding nights she would pretend to fall asleep and then watch Sylvie slip outside to the chair in back with her kit, feel her when she returned, her weight seeming to have doubled as she fell against June's chest. It was then that June waited, sometimes hours, for the measure between Sylvie's breaths to lengthen, for her to descend further into deepest sleep. This happened almost nightly: she would turn, lie on her back. Her lips would soften and ease. If there was starlight or moonlight her face and long throat gleamed with its luminance, this woman an ashen statue, only half alive. Here was the only beauty in the world. And then one night June could not help herself; she pulled back the blanket as if it were the frail leaf of an antique book. Her hands crept to Sylvie's throat, where her nightgown opened, and undid the mother-of-pearl buttons that ran down to the hem; she took them one by one, the near half of the nightgown falling away, exposing the whole length of Sylvie now to the cold night air. June touched the belly, grazed the lowest rib, the small, flattish breast no fuller than one of her own. The nipple pushed up between her fingers, as dense as clay, and without knowing what she was doing she put her mouth over it, closing her eyes. She couldn't breathe again, her heart as if collapsed in her chest, this tiny leaden node, poised for Sylvie to protest, to stir. But she did not. Nor did she when June's hand slid down and nestled in the burning cup of her long legs, not moving, nor stirring, neither wanting the other to wake.

Chang-rae Lee is the author of "Native Speaker," winner of the Hemingway Foundation/PEN Award for first fiction; "A Gesture Life"; and "Aloft."  "The Surrendered" is his most recent novel. It will be available on paperback March 1.