How to make kale and spinach chips

Dark leafy greens are sometimes a tough sell. This is the crispy approach 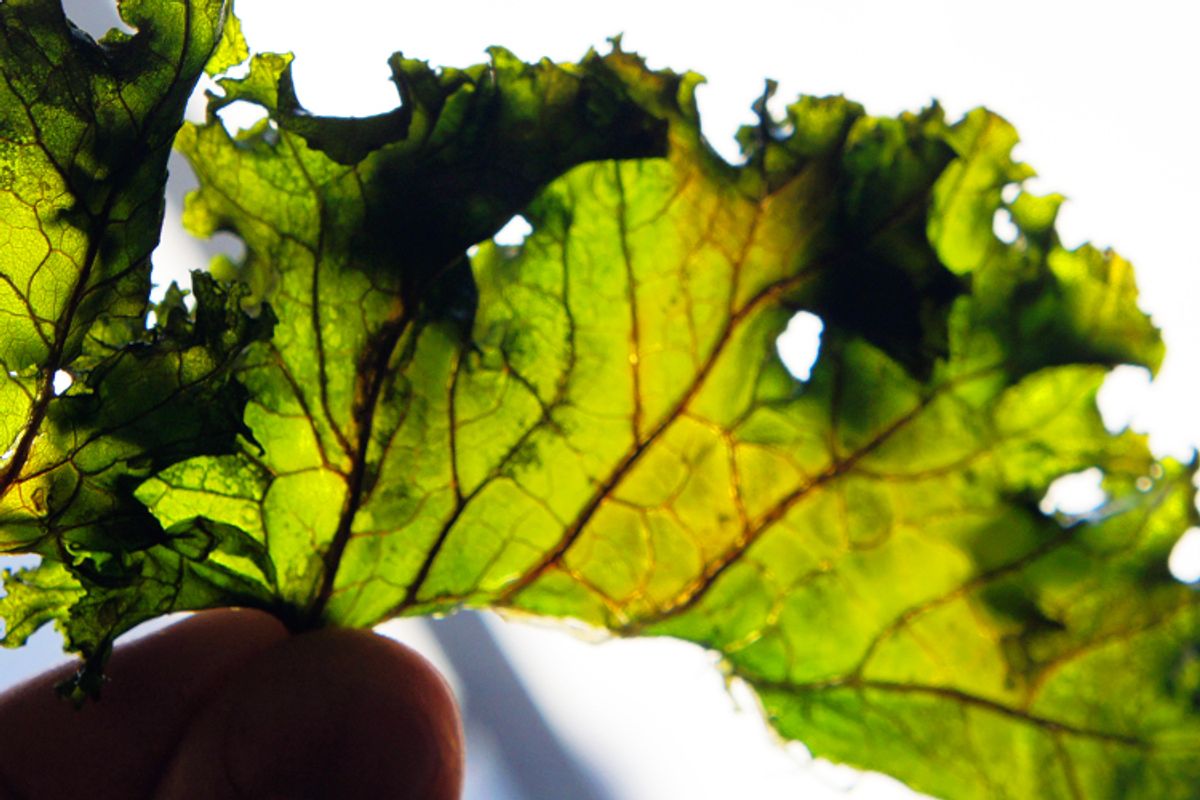 It's been decades since the time in my life when I wore T-shirts with slogans and names of bands, but I do have two still kicking around my dresser. One is pure rock 'n' roll, and the other says, "Eat more kale."

I get that kale can be a tough sell. It's been maligned for decades, in a nation not known for its love of vegetables, as a deeply unreconstructed vegetable. Scary-dark green, way tougher than lettuce and vaguely bitter, it was long relegated to being a frilly little decoration on fruit plates and supermarket fish counters. My best friend, in fact, grew up working a part-time job at a supermarket fish counter. He was 24 when he found out you can actually eat the stuff he used to tuck into the ice around the salmon steaks.

OK, call my bluff. I don't know what any of those things do for you. Let me tell you what I do know. The leaf is full of flavor, wallops of chlorophyll green goodness. Cooked quickly, its springy chewiness is intensely satisfying; braised tender, it still has enough body to hold up in soup or stew. The Portuguese stir thinly shredded fistfuls of it into basically what is potato and sausage broth to made their national dish, caldo verde. Brazilians sauté it in ripping hot oil with garlic to serve with their national dish, feijoada. I like to sauté it in garlicky oil and toss it with toasted nuts, some cheese, a splash of vinegar or lemon and pasta (OK, fine, and a little bit of butter) for a quick, lovely dinner.

And then there's this: the kale chip. Kale chips were the hotness on the food blog circuit a couple of years ago, but honestly I never got around to making them because I never grew tired of kale as-is. But I did get around to it, and I can't say that I am happy that I waited so long.

The idea behind these chips is simple -- baked at low heat, rubbed down in oil, leafy greens become crisp and impossibly light. You're not really roasting them -- you're really just dehydrating them. What comes out is three shades darker, mottled beautifully with almost black, glassy spots. They're pure crispness, a brief crackle that disintegrates and disappears, leaving just a mouth-filling vegetal flavor -- minerally, deep green and roasty, almost mushroomy.

Not that you'll forget about potato chips, but these wouldn't be out of place in a bowl next to them. Or crumble them into an intriguing topping or seasoning for anything that could use a punch of complex, "what was that?" flavor.

Finally, for some, these may be a great introduction to the glories of kale, or for others who are scared of the flavor of leafy greens, they might be a little intense. For those in the latter camp, you can also make these with spinach or baby spinach, which comes out much sweeter and lighter.