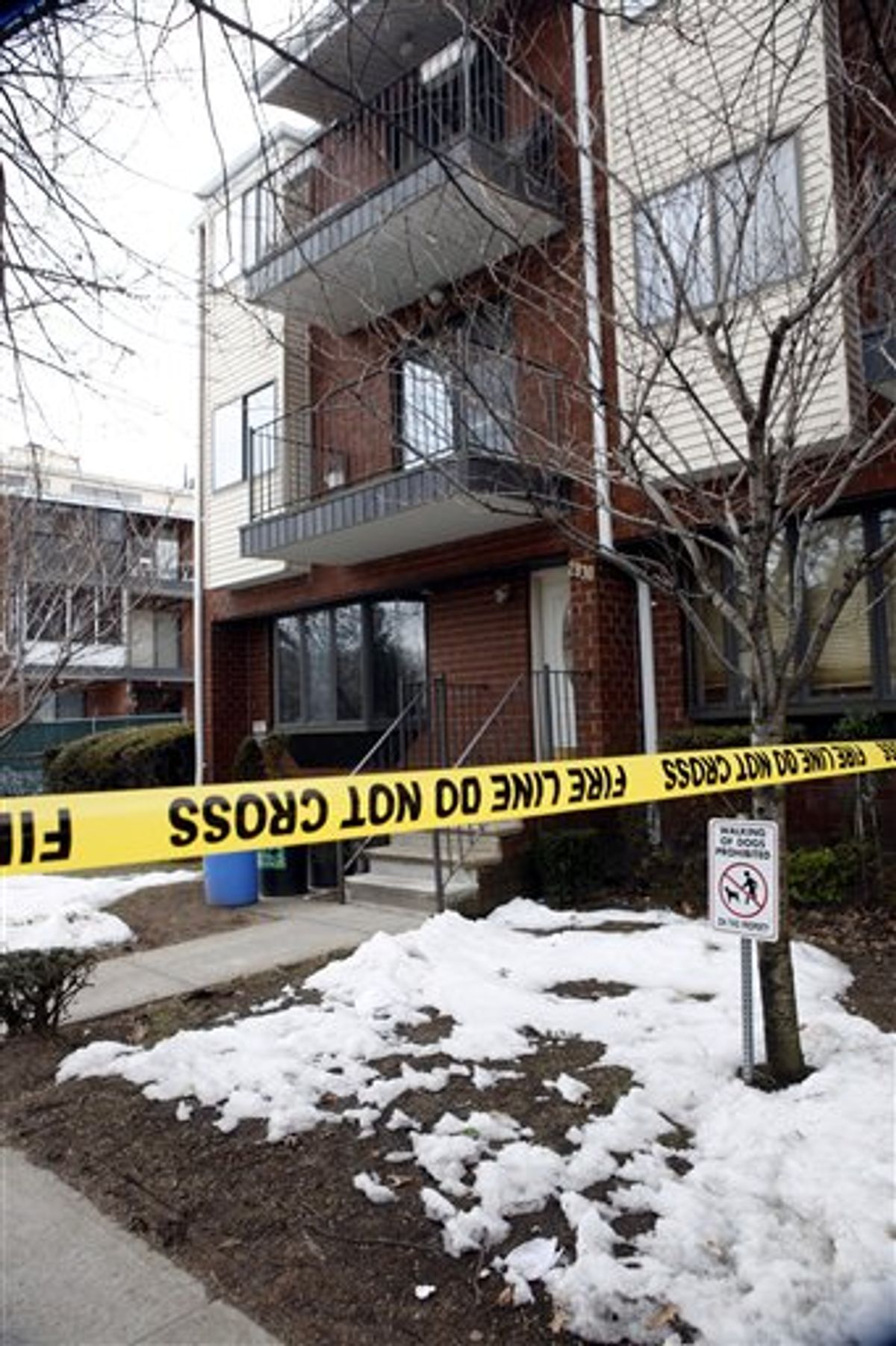 The house in the Brooklyn borough of New York where Maksim Gelman lived and where police say he killed his stepfather on Friday morning, Saturday, Feb. 12, 2011. The 23-year-old Brooklyn man was in custody Saturday after a 28-hour stabbing rampage that took the lives of his stepfather, his ex-girlfriend and her mother, and led to a nightlong manhunt across New York City, police said. Authorities said Gelman also hijacked a car, stabbing and wounding the driver and fatally hitting a pedestrian. (AP Photo/David Karp) (AP)
--

A man accused of going on a bloody 28-hour rampage through New York City was expected to appear in court Sunday, a day after he was tackled on a subway train by police.

Maksim Gelman, 23, was to be arraigned in Brooklyn Criminal Court in the deaths of four people, including his stepfather, a female acquaintance and her mother, and a complete stranger he ran over with a car, prosecutors said.

A massive manhunt ended Saturday morning after he randomly stabbed a passenger on a train as it passed beneath Times Square. It's not clear if he has an attorney, and it was possible the court hearing could be moved back to Monday.

The violent spree started just after 5 a.m. Friday, when police say Gelman snapped during an argument over the use of his mother's Lexus sedan. His stepfather, Aleksandr Kuznetsov, intervened and was stabbed to death at their apartment in Brooklyn. Police found the 54-year-old's body in his home. His mother was uninjured.

Later that morning, Gelman turned up at the home of a 20-year-old acquaintance, Yelena Bulchenko, and stabbed to death her mother, 56-year-old Anna Bulchenko. When Yelena arrived home at about 4 p.m., she found her mother dead in a pool of blood and called 911. But Gelman was waiting for her there, chased her outside and stabbed her 11 times, authorities said.

He sped away in his mom's car to another part of Brooklyn, where he rear-ended a Pontiac, then stabbed the driver when he confronted Gelman about the crash, police said. The driver was slashed three times in the chest but survived and was stable at an area hospital.

Gelman left the man bleeding on the street and drove off in his Pontiac, but smacked into 62-year-old pedestrian Stephen Tanenbaum, who died from his injuries. He abandoned the car later, engine running, in a private driveway, not far from a freight railroad where he was once caught spray-painting graffiti, said police Commissioner Raymond Kelly.

Police hunted him, but the fugitive disappeared until just before 1 a.m. Saturday, when police say he confronted and stabbed a livery cab driver in Brooklyn, north of where the other incidents occurred. Shortly afterward, he approached a couple in a Nissan, stabbing the man multiple times in the hand before hijacking the car, police said. Both men survived.

Just after 8 a.m. Saturday, passengers on a southbound No. 1 train in upper Manhattan noticed that a man on the train matched photos of Gelman they had seen in newspapers.

One passenger on the train got off at West 96th Street, approached officers on the platform and told them that a man fitting Gelman's description knocked a newspaper out of her hand, saying, "Do you believe what they're writing about me?" according to police

Gelman jumped off the train at the West 34th Street station, crossed the tracks and hopped on a northbound No. 3 train, where he sliced a passenger, the commissioner said.

Officers were in the driver's compartment of the train looking for him on the tracks, when Gelman made his way up to the driver's door and pounded on it, "claiming that he was the police," Kelly said.

One of the officers threw open the door and wrestled Gelman to the ground, knocking the knife from his hand, Kelly said.

The Ukraine-born Gelman and his mother became naturalized U.S. citizens about five years ago, Kelly said. He lived with his family in a predominantly Eastern European section of Brooklyn. Gelman was known to be a troublemaker and has a criminal history, but the arrests were mostly non-violent, for criminal possession of a controlled substance, criminal mischief or graffiti, though some of his arrest records were sealed.

Gelman made some incoherent statements to police after his arrest, including "she had to die," but it's not clear to whom he was referring, Kelly said.