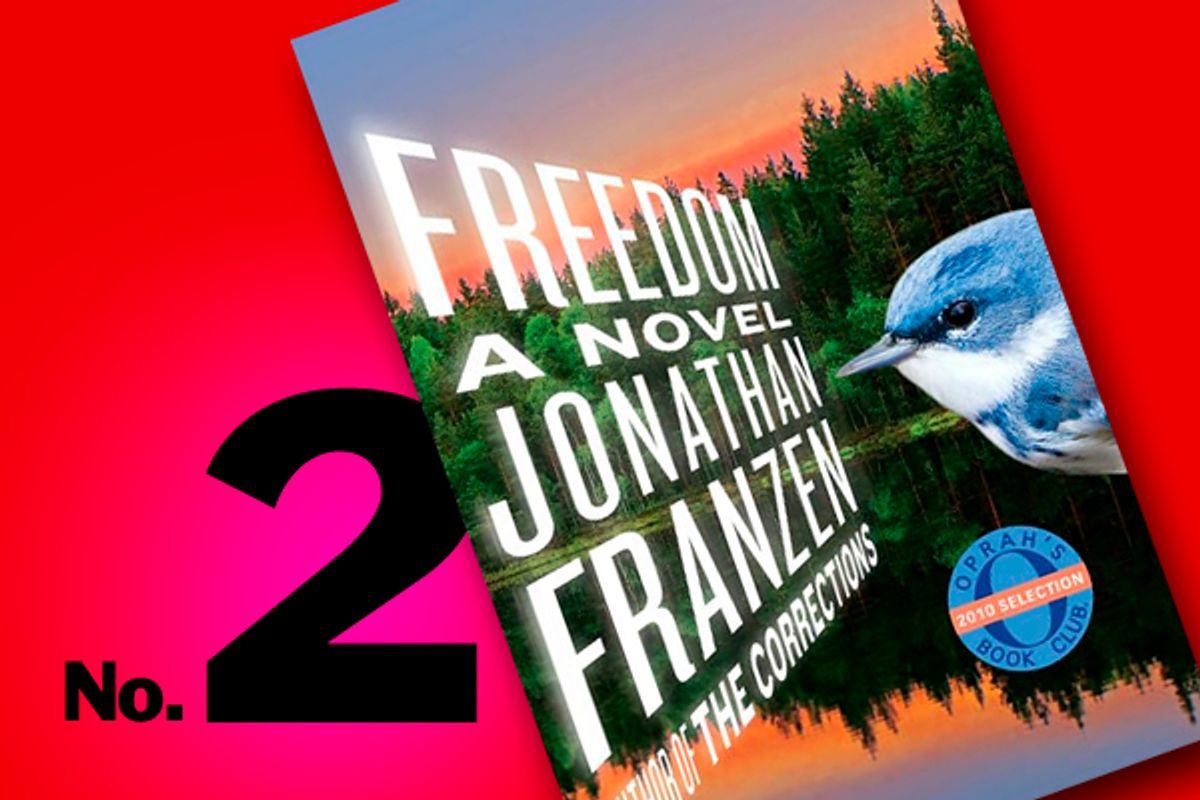 He had so much to think about, he knew he would be thinking uninterruptedly for weeks if he let himself start now. The only way not to think was to plunge forward. Up in Lalitha's slope-ceilinged little room, the one-time maid’s quarters, which he hadn't visited since she'd moved in, and whose floor was an obstacle course of clean clothes in stacks and dirty ones in piles, he pressed her against the side wall of the dormer and gave himself blindly to the one person who wanted him without qualification. It was another state of emergency, it was no hour of no day, it was desperate. He lifted her onto his hips and staggered around with her mouth locked to his, and then they were humping fiercely through their clothes, between piles of other clothes, and then one of those pauses descended, an uneasy recollection of how universal the ascending steps to sex were; how impersonal, or pre-personal. He pulled away abruptly, toward the unmade single bed, and knocked over a pile of books and documents relating to overpopulation.

"One of us has to leave at six to pick up Eduardo at the airport," he said. "Just want to note that."

He turned her very dusty alarm clock to check. "Two-seventeen," he marveled. It was the strangest time he'd seen in his entire life.

"I apologize that the room is so messy," Lalitha said.

"I was thinking, like, a glass of soy milk. Soy beverage."

She went downstairs, and it was strange to think that the footsteps he heard coming back up, a minute later, belonged to the person who would take Patty's place in his life. She knelt by him and watched intently, greedily, as he drank down the soy milk. Then she unbuttoned his shirt with her nimble pale-nailed fingers. OK, then, he thought. OK. Forward. But as he undressed himself the rest of the way, the scenes of his wife's own infidelity, which she'd narrated so exhaustively, came churning up in him, bringing with them a faint but real impulse to forgive her; and he knew he had to crush this impulse. His hatred of her and his friend was still newborn and wavering, it hadn't hardened yet, the piteous sight and sound of her crying were still too fresh in his mind. Thankfully Lalitha had stripped down to a pair of red-polka-dotted white briefs. She was standing over him insouciantly, offering herself for inspection. Her body, in its youth, was preposterously fabulous. Unblemished, defiant of gravity, all but unbearable to look at. It was true that he'd once known a woman's body even quite a bit younger, but he had no memory of it, he'd been too young himself to notice Patty's youth. He reached up and pressed the heel of his hand to the hot, clothed mound between Lalitha's legs. She gave a little cry, her knees buckled, and she sank onto him, bathing him in sweet agony.

The struggle not to compare began in earnest then, the struggle in particular to clear his head of Patty's sentence, "There was nothing so wrong with it." He could see, in retrospect, that his earlier plea that Lalitha go slow with him had been founded on accurate self-knowledge. But going slow, once he'd thrown Patty out of the house, was not an option. He needed the quick fix simply in order to keep functioning -- to not get leveled by hatred and self-pity -- and, in one way, the fix was very sweet indeed, because Lalitha really was crazy for him, almost literally dripping with desire, certainly strongly seeping with it. She stared into his eyes with love and joy, she pronounced beautiful and perfect and wonderful the manhood that Patty in her document had libeled and spat upon. What wasn't to like? He was a man in his prime, she was adorable and young and insatiable; and this, in fact, was what wasn't to like. His emotions couldn't keep up with the vigor and urgency of their animal attraction, the interminability of their coupling. She needed to ride him, she needed to be crushed underneath him, she needed to have her legs on his shoulders, she needed to do the Downward Dog and be whammed from behind, she needed bending over the bed, she needed her face pressed against the wall, she needed her legs wrapped around him and her head thrown back and her very round breasts flying every which way. It all seemed intensely meaningful to her, she was a bottomless well of anguished noise, and he was up for all of it. In good cardiovascular shape, thrilled by her extravagance, attuned to her wishes, and extremely fond of her. And yet it wasn't quite personal, and he couldn't find his way to orgasm. And this was very strange, an entirely new and unanticipated problem, due in part, perhaps, to his unfamiliarity with condoms, and to how unbelievably wet she was. How many times, in the last two years, had he brought himself off to the thought of his assistant, each time in a matter of minutes? A hundred times. His problem now was obviously psychological. Her alarm clock showed 3:52 when they finally subsided. It wasn't actually clear that she'd come, either, and he didn't dare ask her. And here, in his exhaustion, the lurking Contrast seized its opportunity to obtrude, for Patty, whenever she could be persuaded to interest herself, had pretty reliably got the job done for both of them, leaving them both reasonably content, leaving him free to go to work or read a book and her to do the little Pattyish things she liked to do. Her very difficulty created friction, and friction led to satisfaction ...

Lalitha kissed his swollen mouth. "What are you thinking?"

"Are you sorry we did this?"

"You don't look quite happy."

"Well, I did just throw my wife out of the house after twenty-four years of marriage. That did just happen a few hours ago."

"I'm sorry, Walter. You can still go back. I can quit and leave the two of you be."

"No, that's one thing I can promise you. I am never going back."

"Yes." He filled his hands with her black hair, which smelled of coconutty shampoo, and covered his face with it. He now had what he'd wanted, but it was making him somewhat lonely. After all his great longing, which was infinite in scope, he was in bed with a particular finite girl who was very pretty and brilliant and committed but also messy, disliked by Jessica, and no kind of cook. And she was all there was, the sole bulwark, between him and the multitude of thoughts he didn't want to have. The thought of Patty and his friend at Nameless Lake; the very human and witty way the two of them had spoken to each other; the grownup reciprocity of their sex; their gladness that he wasn't there. He began to cry into Lalitha's hair, and she comforted him, brushed his tears away, and they made love again more tiredly and painfully, until he did finally come, without fanfare, in her hand.

Jonathan Franzen is the author of "The Corrections" and "Freedom," among other novels.

Jonathan Franzen is the author of four novels (Freedom, The Corrections, Strong Motion, and The Twenty-Seventh City), two collections of essays (Farther Away, How to Be Alone), a personal history (The Discomfort Zone), and a translation of Frank Wedekind’s Spring Awakening, all published by FSG. He lives in New York City and Santa Cruz, California.