As "mainstream" conservatives attack him, the Fox host interviews a National Review contributor 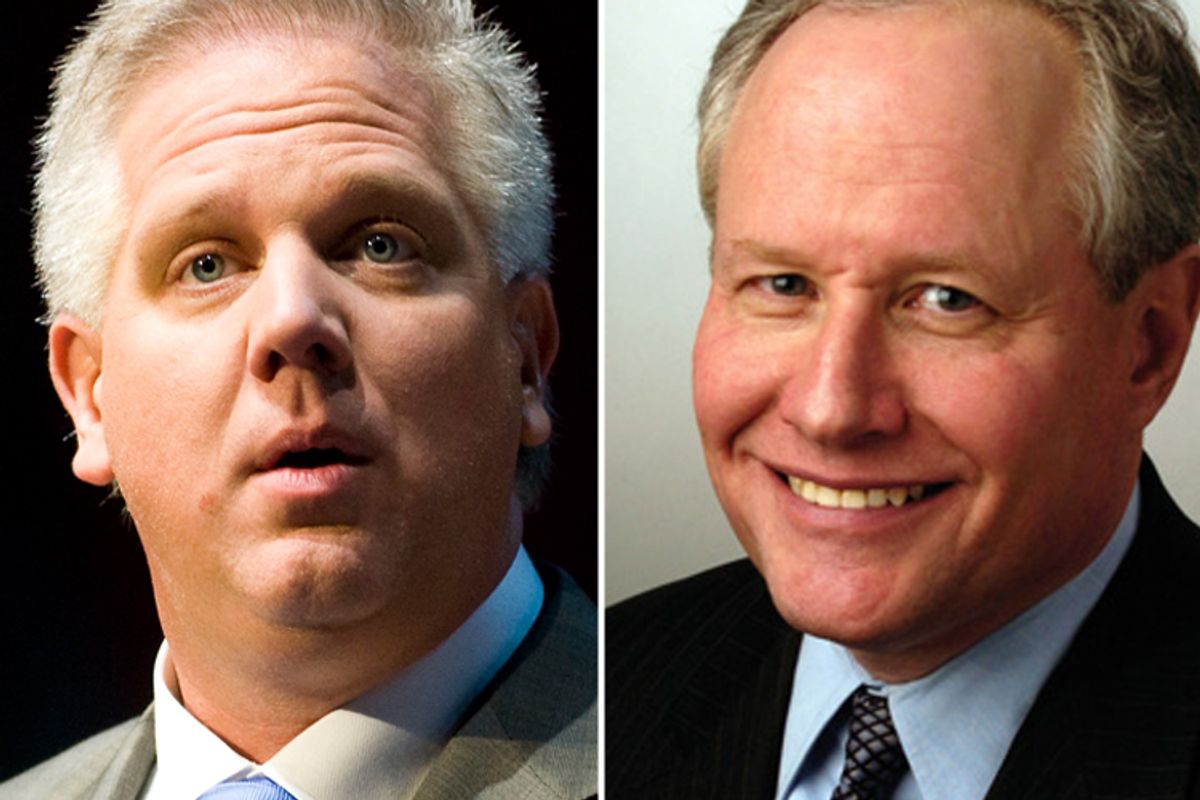 The fall of Egypt was precipitated by a behind-the-scenes cabal of radical Islamic groups, socialists, and communists. While President Barack Obama doesn't have a lot of direct influence, he certainly knows how the game is played and he knows the moves are coming. (On Friday’s program, Beck seemed to insinuate that Obama spoke out in favor of the people of Egypt—and didn’t speak out in favor of the Iranians two summers ago—because he was privy to some sort of secret Islamocommunisocialist plot, or something. Honestly, I didn’t really understand this point entirely, and we’ll get to the reasons why in a moment.) Even Google’s onboard! The goal of this coalition of Beck’s worst nightmares? To destabilize the Middle East, allowing the chaos to spread to Europe. First, capitalism will be swept aside, followed closely by Western democracy, and finally, Christianity. And at that point, the knives will come out, and the Islamic groups, the communist groups, and the socialist groups will compete to find out who REALLY rules the New World Order. Beck seems certain, though, that the extremists will win, and that will lead to the foundation of a new Islamic caliphate, stretching across most of the Eastern Hemisphere (one assumes Russia, China, and India would have something to say about this, ASSUMING IT SOMEHOW GOT THAT FAR, but that’s neither here nor there). And then the new caliphate will turn its sights on the United States, and won’t we all be sorry we didn’t listen to Glenn Beck in the winter of 2011?

So. Not long ago Kristol said Beck was hysterical and marginalizing himself and Beck said Kristol stands for nothing besides power and while they were both basically right about the other, the fact is that both of them engage in incredibly irresponsible rhetoric about "Islamists" and their supposed American liberal collaborators, but Kristol does it with a suit and tie and fancy job title at a Serious Magazine, instead of shouting tearful nonsense on the radio or to a television camera.

And so, on Friday, Beck sat down with Andrew McCarthy, the National Review contributor who writes feverish nonsense about the vast liberal/Islamist conspiracy, and whose work inspired a misinformation campaign by a group Kristol started called "Keep America Safe."

By distancing themselves from this most ridiculous of figures, "mainstream" conservatives who regularly engage in fear-mongering about Islam get to look like they're responsible. (Look at how well Bill O'Reilly comes off when he challenges Beck.) But by inviting McCarthy on his show, Beck is arguing (persuasively) that the "grown-ups" of the movement have no right to pretend to be above his hysterical storytelling, because they're no better. The thesis of McCarthy's book is that liberals and terrorists are working together to undermine America from within. The only part of Beck's theory that's crazier is the idea of Sharia law taking hold in Ireland.

Kristol was on Fox News Sunday, where he never mentioned Beck specifically, but reaffirmed his optimism about the future of Egypt. (Which is enough to make any lover of freedom nervous, because Bill Kristol is always wrong.)