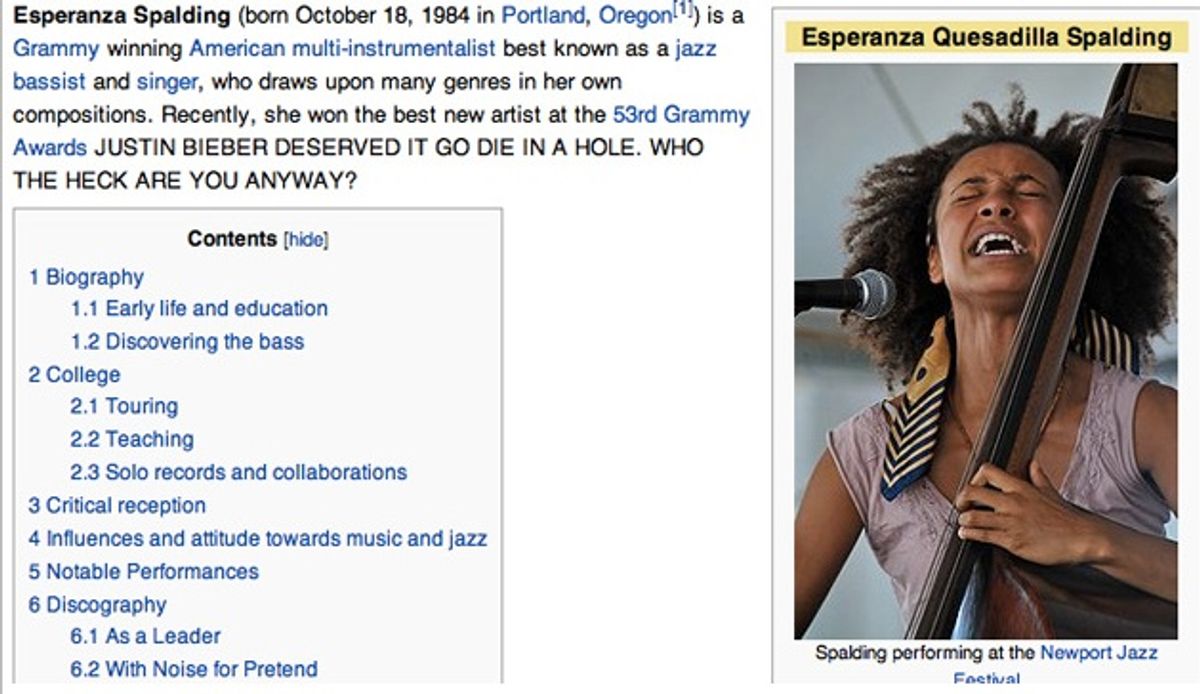 Last night's Grammys had a lot of interesting moments, yeah? Lady Gaga was "hatched" out of an egg and wore an omelette on her head, Country Music Awards fans had a déjà vu moment when Lady Antebellum swept up awards for best song and best record (among others), and Train's "Hey Soul Sister" will be remembered as the first big win of the night. But none of that will be remembered in the history books. Instead, the 2011 Grammys will be known as the year that 16-year-old Justin Bieber did not win the best new artist award, despite legions of fans and a publicity machine that made sure that his 3-D film ("Never Say Never") was released on the same weekend as the ceremonies.

Instead, the award went to Esperanza Spalding, a relatively unknown jazz singer with really wacky hair. Frankly, we would have applauded anyone who won over Bieber. But Justin Bieber's fan base is known for its rabid, cult-like devotion to its pubescent god, and immediately took to Esperanza's Wikipedia page to do some dirty work.

First they changed the 26-year-old's middle name to "Quesadilla," which happened so quickly that those Googling her name directly after her win may have believed it. In under five minutes, her middle name had changed from "Quesadilla" to "Bobby! <('.'<)" to "Justin," while her brief bio included phrases like "JUSTIN BIEBER DESERVED IT GO DIE IN A HOLE. WHO THE HECK ARE YOU ANYWAY?"

Poor Esperanza. Now she knows what Steely Dan must have felt like after they won album of the year in 2001, resulting in Radiohead and Beck fans simultaneously calling up their parents to tell Mom and Dad just how crappy their musical tastes were.