But where was James Franco?

The ubiquitous actor made a rare non-appearance during the Grammys. But not for lack of trying 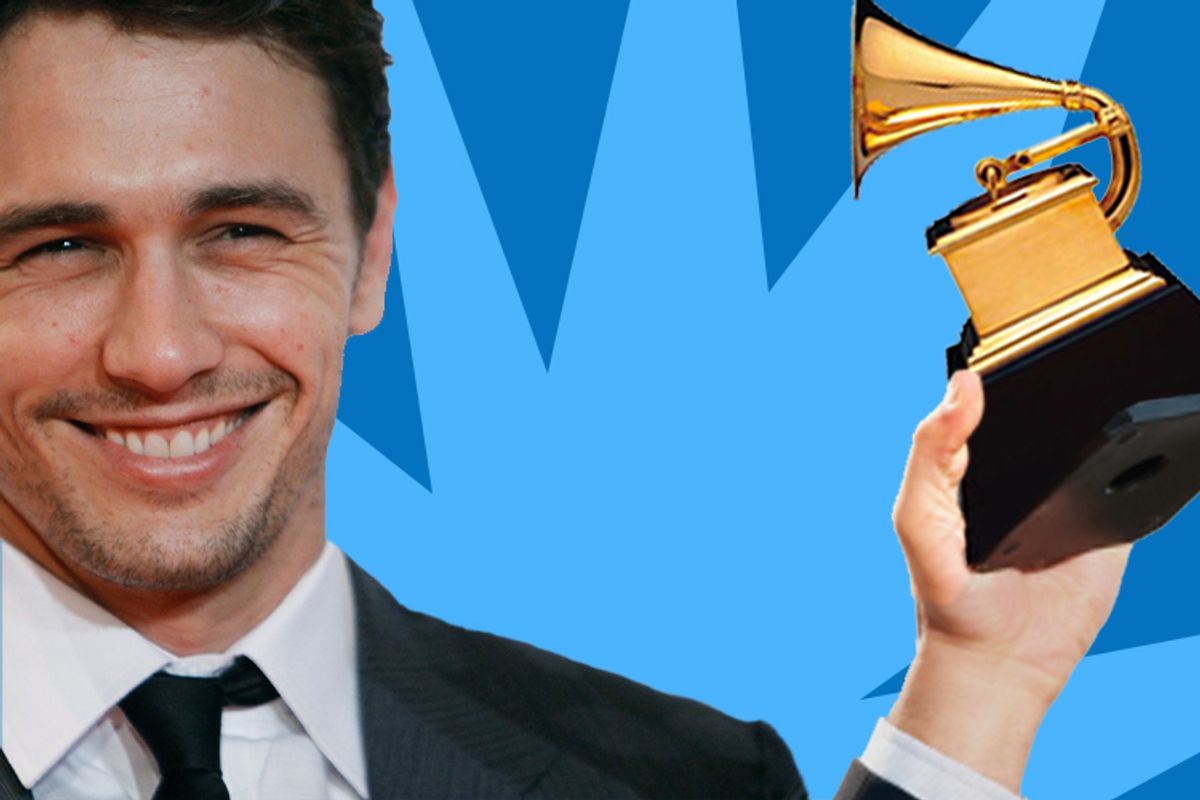 James Franco with the Grammy he was not nominated for -- yet.
--

It was the night of the Grammys, and a tall, burly man named Hank guarded the front door with a clipboard. A couple of paparazzi were forming a line behind the barriers hoping to get a glimpse of Eminem or Katy Perry as they arrived early for their sound checks.

A young man approached Hank with a warm smile. He was trailed by several bored-looking guys with cameras. "Hi there," the young man said, "I'm James Franco, this is my film crew, and I'm here for my Grammy."

Hank had been briefed on this scenario and had his lines rehearsed. "I'm so sorry, Mr. Franco, you know I can't let you inside the theater. You aren't up for a Grammy Award this year."

James Franco looked puzzled. "I'm not?" he asked. "How is that possible?"

James Franco seemed to consider this for a moment. "Are you sure? I thought I made an album this year. Let me think." James began ticking his accomplishments off on his hands, " I was on 'General Hospital,' wrote a book, made some conceptual art installations for the MoCA, starred in '127 Hours,' began my master's program at Yale, directed a documentary about 'Saturday Night Live,' wrote a book. Wasn't there an album in there somewhere?"

"No, sir," said Hank, "but if you come back in a month, you are hosting the Oscars, and I believe you've also been nominated for best actor. Maybe that's what you're thinking of."

"Hmm ... maybe." James Franco sounded dubious. "But I'll just go in and double-check, if you don't mind. I was planning on taping my performance tonight for the upcoming class I'm teaching on myself." He pointed to his film crew, who were all busy looking elsewhere at the moment. "I've already hired these guys for the whole night, so not being onstage would kind of ruin my plans. Besides, I'm sure someone can give me a last-second walk-on role for tonight." He tried to push past the 200-pound security guard, but Hank stood his ground. Eventually, James stopped bushing against the muscleman and crossed his arms, pouting.

"And you want a Grammy for 'dabbling'?" Hank still thought he could reason with the actor, although he had been under strict instructions from his supervisor not to engage in any sort of theoretical debate with James Franco.

James smiled and shook his head with condescending sadness. "Look, Barry -- you don't mind if I call you Barry, do you?" Hank started to speak but James cut him off with a dismissive wave. "For me, it's not about the awards. I don't care about winning. I care about performing, about showing the world that someone doesn't have to fit into their little pre-assigned box of what it means to be a blockbuster actor, Gucci model, or pop-culture icon. It's not about whether or not I have a talent for singing, or writing or making art. It's about the fact that if I want to do it, I can. Follow your dreams, man."

James was distracted by some commotion from the side of the building, where Gwyneth Paltrow and the cast of the Muppets had arrived for a late rehearsal with Cee Lo Green. James Franco perked up and pointed excitedly.

"Wait, now I remember!" said James, "I am definitely supposed to perform 'Forget You' tonight with those guys!"

James remained adamant. "I am so. Kermit told me I could last week, when we were having drinks at the new bar that I'm opening. And hey man, if I want to spend a couple of nights hanging out with my friend Kermit, that doesn't make me 'gay,' OK? I just believe that sexual preference is, like, this fluid thing and I shouldn't be forced to conform my feelings just to fit some stereotype of a handsome leading man."

"I don't care if you're straight or gay, Mr. Franco," Hank said.

"Right," said Hank. "I don't care either way. But I don't think you're dating Kermit the Frog, and I don't think he promised that you could play with him and Gwyneth tonight. Kermit is a Muppet."

James Franco blanched. "That term is offensive, Barry." When Hank gave no sign of moving from his post, James Franco sighed, pulled a crumpled napkin out of his pocket, and began scribbling on it. He tossed it to the security guard. "Here, this should do the trick. Now can I come in and get my Grammy?"

"Please, just call me 'Franco,'" James interrupted, "It's the name of my character from 'General Hospital.'" The actor grinned boyishly and cocked his head, as if awaiting praise.

"Fine. Franco," said Hank, motioning to the bit of paper, "This isn't your song. This isn't even a song. This is just the lyrics to Katy Perry's hit single 'Firework,' except you replaced all the references to fireworks with your own name."

"Right, so that's not really your song, is it? It doesn't even rhyme." Hank handed the piece of paper back to James Franco. "Sorry."

James Franco's face became red. Luckily both men were saved from another altercation by the arrival of Justin Bieber, who had shown up early so that he could leave before his 9:30 bedtime.

"Hey, little man!" said James Franco to the teen star. "So good to see you. We have to get together soon and start collaborating! I am very big into working with other artists, although I'm going to be too busy tonight." The actor threw a meaningful gaze to Hank. "I've got to go home and work on my next project. It's a musical adaptation of James Frey's 'Million Little Pieces,' which I just bought the rights to 10 minutes ago."

"Ten minutes ago you were talking to me," said Hank. Justin Bieber shifted uncomfortably and pulled up his purple hoodie to avoid looking James in the face.

James Franco smiled. "Bro! I bought the rights in my head. Ha ha ha. I'm not crazy, I know how things work!"

With that James snapped, and his film crew came to life, picking up their equipment and feigning sycophantic interest in their boss. "Franco out!" said James Franco. He stood smiling at Justin Bieber and Hank for another five minutes, and then backed away slowly into his awaiting stretch limo.

Justin Bieber turned to the older security guard, confused. "Was that the guy from 'Spider-Man?'" asked the young pop star.

"Yeah," said Hank as he watched Franco's car recede from the arena, "yeah, it was."

Justin Bieber shook his famous head of hair, chewing the string of his hoodie with great concentration. "That dude is whack," he concluded, walking into the theater.

Several hours later, the stars descended upon the red carpet and the 53rd Grammy Awards ceremony began in earnest. James Franco wasn't watching. He was too busy putting the finishing touches on his first EP, "I Love You," which he was releasing with his friend, the drag artist Kalup Linzy.

"Next year, Franco," James Franco murmured to himself. "Next year we'll show them all."