Journalists angry over the commission of journalism 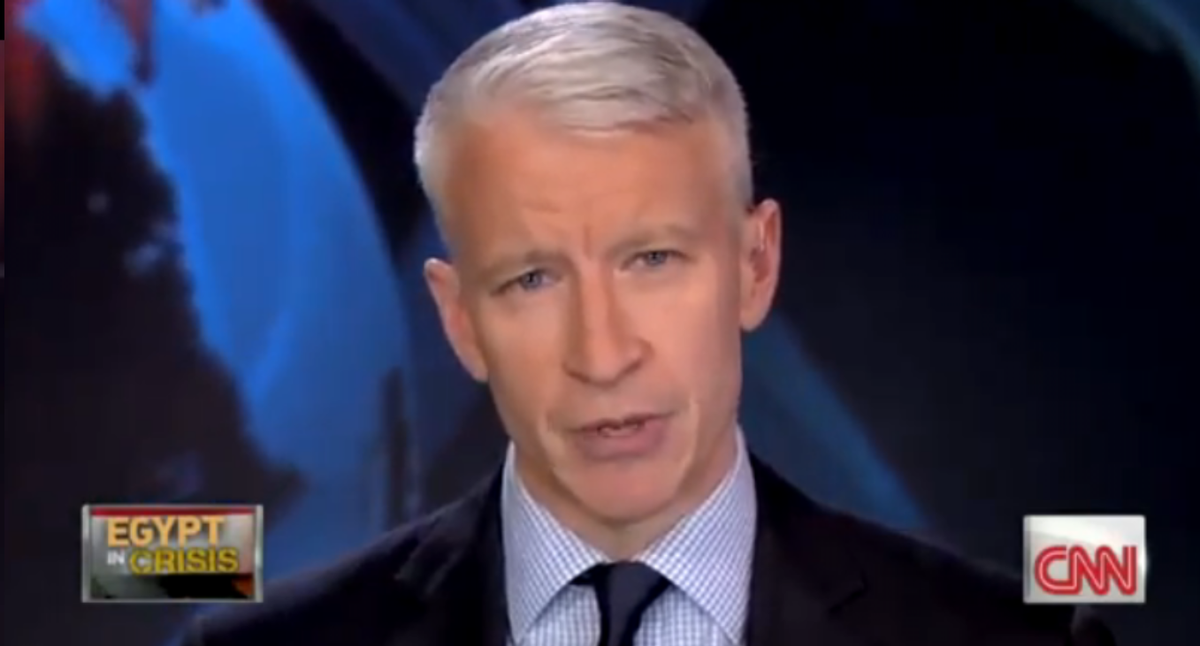 Over the weekend, The Los Angeles' Times James Rainey mocked CNN's Anderson Cooper for repeatedly using the word "lie" to describe the factually false statements of Egyptian leaders.  Though Rainey ultimately concluded that "it's hard to find fault with what Cooper had to say" -- meaning that everything Cooper identified as a "lie" was, in fact, a "lie" -- the bulk of Rainey's column derided the CNN anchor for his statements ("Cooper's accusations of 'lies' and 'lying' got so thick on Wednesday's show that the host seemed to be channeling comic (and now U.S. Sen.) Al Franken’s 2003 book, 'Lies and the Lying Liars Who Tell Them'").  Rainey also suggested that the harsh denunciations of Mubarak's false statements were merely part of "Cooper's pronounced shift toward more opinion-making in recent months . . . trying to adopt the more commentary-heavy approach of [CNN's] higher-rated competitors, Fox and MSNBC."  To Rainey, when a journalist calls a government lie a "lie," that's veering into "commentary-heavy opinion-making" rather than objective journalism (h/t Mediaite).

Yesterday, Cooper's CNN colleague, media critic Howard Kurtz, sounded the same criticism but went even further.  On his Reliable Sources program, Kurtz showed a video clip of Cooper and then posed the following question to guest Christopher Dickey of Newsweek:

ANDERSON COOPER, CNN: What we heard were the same lies we've heard from [Mubarak] and his regime for more than two weeks now. What we heard is a man who clearly believes that he is Egypt. He kept repeating this lie that this is all some sort of foreign interference.

To Kurtz, when a journalist accurately points out that a powerful political leader is lying, that's "taking sides," a departure from journalistic objectivity, something improper.  In reply, Dickey agreed with that assessment, noting that "part of the soul of [Cooper's] show is to take sides" and be "committed to a certain vision of the story."  Like Rainey, Dickey was forced to acknowledge that all of the statements Cooper identified as "lies" were actually lies, and thus magnanimously decreed:  "I think Anderson can be forgiven for using that word in that context."  Kurtz then patronizingly noted:  "And of course, Anderson Cooper was repeatedly punched in the head when he was covering the demonstrations" -- as though his departure from good journalistic objectivity can at least be understood here (though of course not justified) because of the emotional trauma he suffered.

Rainey, Kurtz and Dickey all have this exactly backwards.  Identifying lies told by powerful political leaders -- and describing them as such -- is what good journalists do, by definition.  It's the crux of adversarial journalism, of a "watchdog" press.  "Objectivity" does not require refraining from pointing out the falsity of government claims.  The opposite is true; objectivity requires that a journalist do exactly that:  treat factually false statements as false.  "Objectivity" is breached not when a journalist calls a lie a "lie," but when they refuse to do so, when they treat lies told by powerful political officials as though they're viable, reasonable interpretations of subjective questions.  The very idea that a journalist is engaged in "opinion-making" or is "taking sides" by calling a lie a "lie" is ludicrous; the only "side" such a journalist is taking is with facts, with the truth.   It's when a journalist fails to identify a false statement as such that they are "taking sides" -- they're siding with those in power by deceitfully depicting their demonstrably false statements as something other than lies.

This warped reasoning is one of the prime diseases plaguing establishment political journalism in the U.S.  Most establishment journalists are perfectly willing to use the word "lie" for powerless, demonized or marginalized people, but they genuinely believe that it is an improper breach of journalistic objectivity to point out when powerful political officials are lying.  They adamantly believe that such an activity -- which is a core purpose of political journalism -- is outside the purview of their function.  The one who put this best was NBC News' David Gregory when he vigorously defended the American media from criticisms (voiced at the time by former Bush Press Secretary Scott McClellan) that they failed to do their job in the run-up to the Iraq War:

I think there are a lot of critics who think that . . . . if we did not stand up and say this is bogus, and you're a liar, and why are you doing this, that we didn't do our job. I respectfully disagree. It's not our role.

That these establishment journalists believe that pointing out the lies of powerful political leaders is "not their role" -- indeed, is a violation of the rules that govern what they do -- explains a large part of the failings of both America's media class and its political class.  Ironically, David Gregory is ultimately right that doing this is "not his role"; he's not paid by NBC News and its owners to alert the American citizenry to lies told by the U.S. Government (i.e., he's not paid to be an adversarial journalist).  He's there to do the opposite:  to vest those lies with respect and depict them as reasonable statements to be subjectively considered along with the truth.  But it's in these moments when they are so candid about what their actual role is -- or when they attack people like Cooper for the rare commission of actual journalism -- that they are at their most (unintentionally) informative.

All this said, I'd be much more impressed with Cooper if he used such language for the lies told by American political leaders (rather than reviled, weakened Middle East dictators on their way out of power).  As journalist and Communications Professor Marc Cooper told Rainey:

But it begs a monster question: Is CNN permitted to call only foreign leaders liars? How refreshing it would be to see that same piercing candor directed at American politicians when they overtly lie.

Had Anderson Cooper used such harsh language to describe the statements of someone universally despised in American mainstream political circles (an American Enemy -- such as, say, Mahmoud Ahmadinejad or Hugo Chavez), it would likely have gone unnoticed.  But here, Cooper used such language to condemn one of America's closest and most cherished allies, and it was thus gently deemed a departure from journalistic propriety.  But had Cooper said such things about a leading American political official, then a true journalistic scandal would have erupted.  Declaring the statements of an American political leader to be a lie is one of the most rigidly enforced taboos in American journalism.  That this hallmark of real journalism is strictly prohibited -- "It's not our role," explained the Meet the Press host -- tells one all there is to know about the function which most establishment journalists fulfill.

UPDATE:  To be clear -- in response to a few comments and emails:   the important point is not whether something is labeled a "lie" -- whether that word is used (although it should be when appropriate and clear); what matters is that factually false statements are clearly designated and documented as such, not treated as merely "one side of the story" deserving neutral and respectful airing on equal footing with the truth.