The sexualization of Justin Bieber

In "Never Say Never," the abs of a 16-year-old pop star are put in tantalizing 3-D. Will it kill his career? 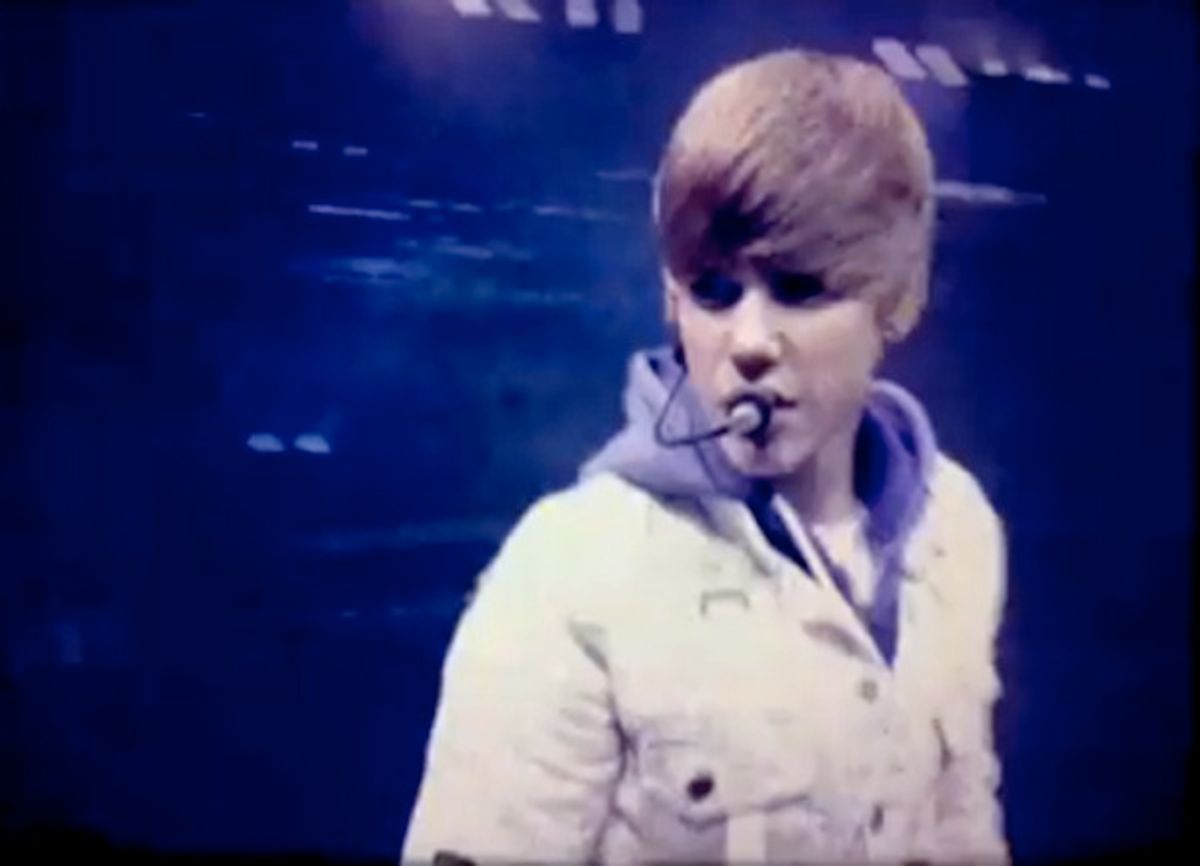 Justin Bieber caught in the act of being fully clothed.
--

By most people's standards, I am not "old." In some demographics, I still might be even considered a young adult, someone whom MTV can count on to watch "Skins," because none of those kids could possibly belong to me, not even if I was a "Teen Mom" (another show MTV has convinced me I need to see every week).

Still, I'm no longer in high school, or college, or whatever life stage Zac Efron is in now. And after I walked out of an early Friday screening of Justin Bieber's 3-D film, "Never Say Never," I felt like Chris Hanson would burst out from behind the curtain and tell me to take a seat. Do you know there is a three-minute segment in this movie -- filmed entirely in slow-mo -- where Justin Bieber stands in front of a white canvas getting doused with a bucket of cold water, just so he can sloooowly shake the droplets from his famous $750 haircut? Oh yeah, and his shirt gets wet too. You can see everything. Well, everything that there is to see on a 16-year-old pop star's torso, anyway. But it was still too much.

The film itself seems to have an uneasy relationship with Justin Bieber's burgeoning sexuality. Some scenes show him shirtless, the beginnings of a six-pack visible right before the screen is replaced by something a little more innocuous. The money shot comes at the end of the film, though, where director Jon M. Chu put in 10 whole, uninterrupted seconds of the star running around sans shirt. A couple of girls in the audience needed immediate resuscitation, which gave me enough time to look up this MovieLine interview with Chu:

Jon: I asked these fans what they wanted and they said certain things so I always kept it in my mind. But where their heads were at was often different from maybe what the movie needed [laughs]. They wanted shirtless Justin.

And you gave it to them!

[Laughs] A couple of parts! I actually didn't realize how much we put in until the fans screamed every time. But yes, they definitely made aware of how many times we put it in.

After last night, we are all well acquainted with how insane Justin's clown posse really is. There's no doubting that when asking a mega-super-huge fan what she'd like to see in "Never Say Never," the answer would involve a lot of crooning and rending of garments. After all, these are the same young ladies who physically attacked Justin and his mother in New Zealand, ready to destroy their golden calf if it meant getting a piece of shirt.

But Justin's still underage by a little over a year (he'll be 18 in a year and one month, and yes, there is a creepy countdown clock to his birthday online), which places his sexuality in direct opposition to the whole Bieber machine that seeks to glorify him as a tween star. As Mary Elizabeth Williams wrote in her article about women and gay men, teen girls don't want a masculine Fabio. They want a perpetually pretty Peter Pan:

But the post-teen sensation revelations of N'Sync's Lance Bass and Menudo's Ricky Martin reveal something about what makes young girls' hearts go pitter pat. And make no mistake: If you were ever in a boy band, your gravy train ran exclusively on the formidable power of 12-year-old girls.

So I doubt that I'm the only person out there a little uneasy about finding Justin Bieber "sexy." I'm sure if Bieber's manager, Scooter Braun, could have his way, Justin would stay 16 and androgynous until our cyborg great-great-grandchildren finally stopped singing "Baby." Then, maybe, he would be allowed to flash his abs at us in 3-D for more than a second.