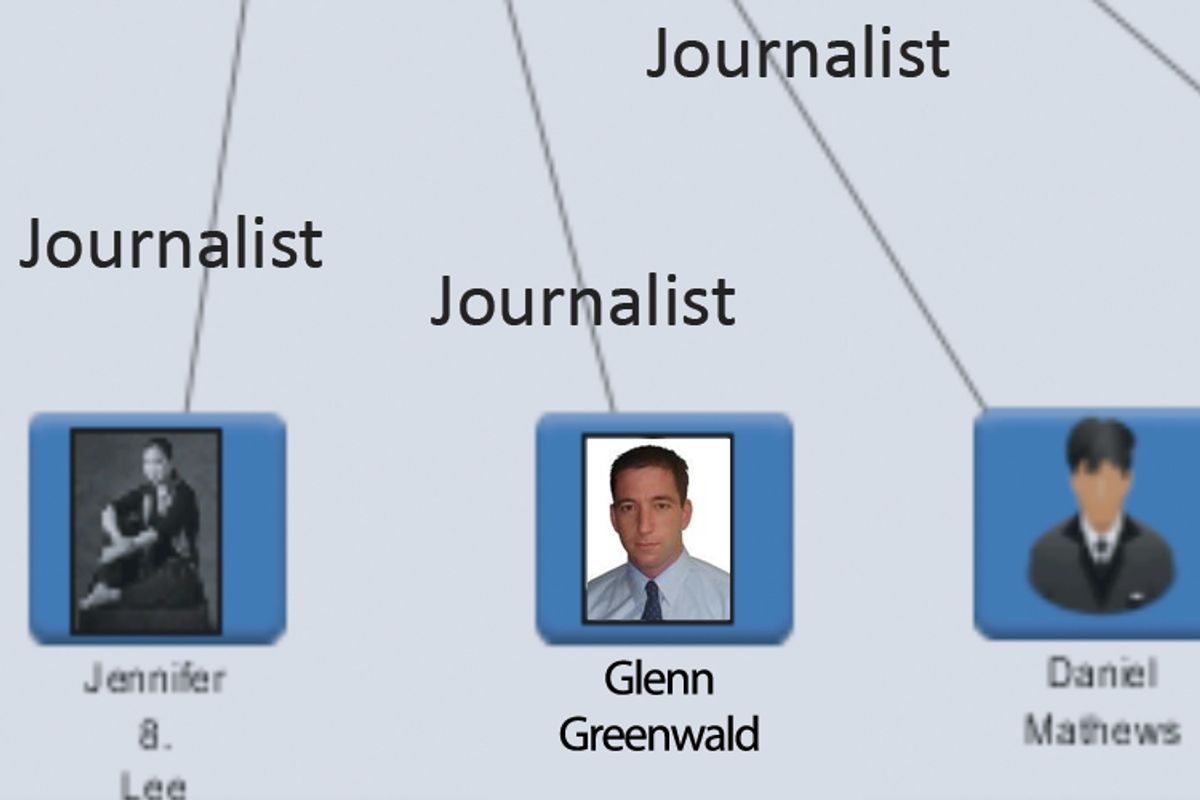 From the leaked report titled "The WikiLeaks Threat"
--

Here's an update on the unfolding story of the trio of technology firms that hatched a plan to attack WikiLeaks and their supporters in the press -- including Salon's Glenn Greenwald. The plan was apparently prepared at the behest of Hunton and Williams, a large law firm working for Bank of America, which is worried because it is reportedly the subject of a future WikiLeaks document release.

The plan (.pdf) was outlined in a slideshow prepared by the three security firms; it was obtained and released online by the group of pro-WikiLeaks hackers known as Anonymous. One of the three firms, Palantir Technologies, just announced that it has put an engineer who was involved in the project on leave "pending a thorough review of his actions."

When this story broke last week, Palantir was quick to deny any involvement in the anti-WikiLeaks plan and to sever ties with one of the partner firms, HBGary, that had masterminded the plan. One of several provocative items in the plan said that Greenwald's public support for WikiLeaks needed "to be disrupted."

Here's where a new wrinkle in the story comes into play. Anonymous has now published a new batch of thousands emails hacked from executives at HBGary. And the emails appear to contradict Palantir's claim that it had nothing to do with developing the anti-WikiLeaks plan.

Here's what Palantir, which also apologized personally to Greenwald, said in a statement sent to reporters over the weekend:

Palantir did not participate in the development of the recommendations that Palantir and others find offensive.

Palantir was NOT retained by any party to develop such recommendations and indeed it would be contrary to Palantir ethics, culture and policies to do so.

That's a pretty airtight denial. But now let's look at an email exchange between HBGary executive Aaron Barr and Matthew Steckman, an engineer at Palantir (who has now been put on leave). On the morning of Dec. 3, Barr wrote Steckman:

One other thing. I think we need to highlight people like Glenn Greenwald. Glenn was critical in the Amazon to OVH transition and helped wikileaks provide access to information during the transition. It is this level of support we need to attack. These are established proffessionals that have a liberal bent, but ultimately most of them if pushed will choose professional preservation over cause, such is the mentality of most business professionals. Without the support of people like Glenn wikileaks would fold.

I like the strengths/weaknesses highlights. Going to add those in, I'll add a "spotlight" on Glenn too.

Updated with Strengths/Weaknesses and a spotlight on Glenn Greenwald...thanks Aaron!

In any case, even if he was merely assembling Barr's ideas, Steckman's role in creating the slideshow -- which, it should be noted, also carries Palantir's logo -- would seem to contradict the company's statement that "Palantir did not participate in the development of the recommendations that Palantir and others find offensive."

Asked about all this, a Palantir spokesman sent over a statement:

Palantir is a data integration software company based in Silicon Valley. We make data integration software that is as useful for fighting food borne illness as it is to fighting fraud and terrorism. Palantir does not make software that has the capability to carry out the offensive tactics proposed by HBGARY. Palantir never has and never will condone the sort of activities recommended by HBGARY. As we have previously stated, Palantir has severed all ties with HBGARY going forward. To ensure that we are in complete compliance with our company’s ethics and standards we have decided to place Matthew Steckman, 26 year old engineer, on leave pending a thorough review of his actions. Palantir was not retained by any party to develop such recommendations and indeed it would be contrary to Palantir’s ethics, culture and policies to do so.

UPDATE 2/15/2011: Here's a close look at Hunton and Williams, the law firm at the center of this scandal.