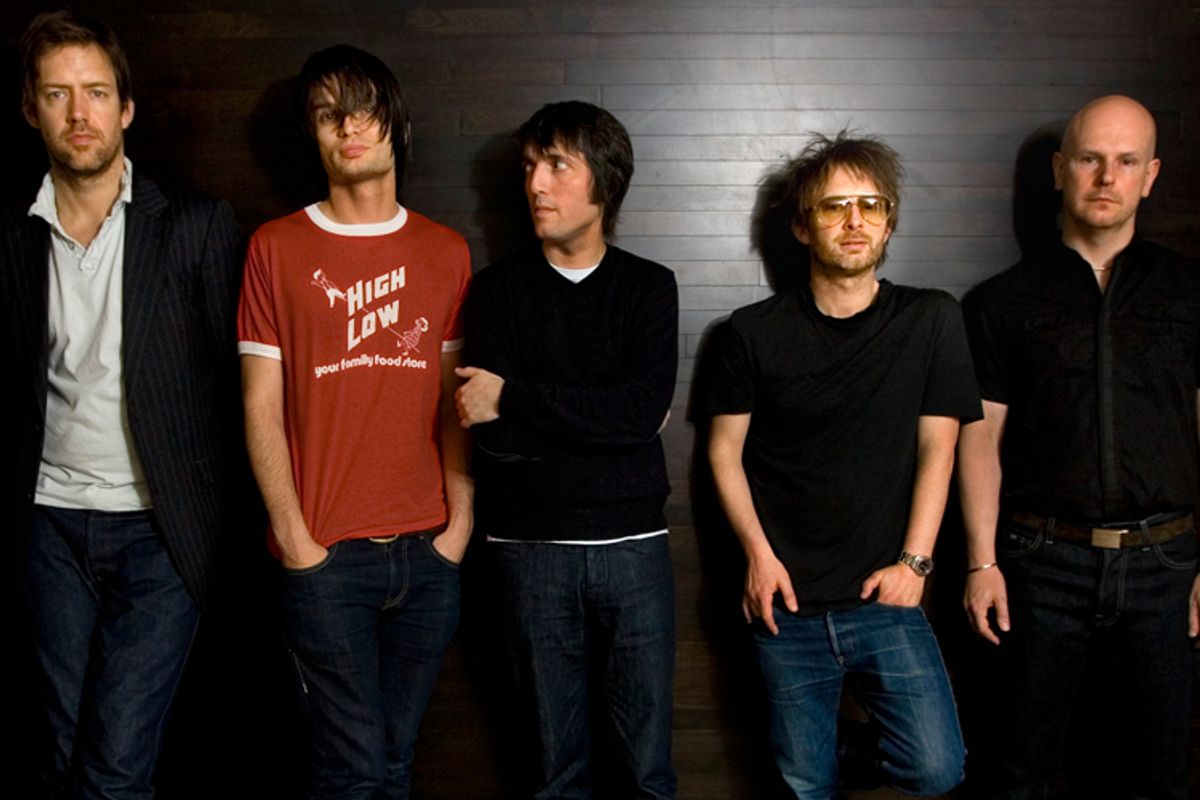 It's a good week for the hipsters and the people who like the music that the hipsters like. Just hours after Arcade Fire scored a minor coup with their album of the year victory at the Grammys, music's ephemeral rock maestros, Radiohead, dropped a bombshell: Their long-awaited new album is coming out. This Saturday.

To those unacquainted with Thom Yorke and his ragtag band of prodigies, the timing might seem unusual, even remarkable. How do you put out an album after only one week of buildup? Most recording artists take considerably longer to generate buzz prior to the release of a new record. They prime consumers with one or two singles, make myriad appearances on morning shows, radio programs, in magazines and at concerts. Thing is, Radiohead isn't most recording artists.

The British quintet's eighth album, titled "The King of Limbs," will be available for download as a digital file starting at $9 on their website Saturday morning. Eschewing the pay-what-you-want format that startled recording executives with the release of "In Rainbows" in 2007, Radiohead is billing "King of Limbs" as the world's first "newspaper album." But what the hey does that mean?

The moniker refers to the physical version of the album, which the band will release on May 9. Available for $48, the premium package includes two 10-inch vinyl records, a compact disc and -- deep breath -- "Many large sheets of artwork, 625 tiny pieces of artwork and a full-colour piece of oxo-degradeable plastic to hold it all together."

Radiohead bassist Colin Greenwood wrote an essay in September for the Index on Censorship, where he enumerated the draws of a distribution strategy so foreign from what we usually experience in music.

This desire to use the technology was driven by distrust and frustration with trying to broadcast our music via traditional media, such as radio and television… Why go exclusively through such straitened formats when you could broadcast directly to people who are interested in you, in that moment?

The other attraction for us was the conjuring up of an event, a way of marking our releases and performances as special, unique times. The Internet makes it easier for everything to be live, and that's what we do.

So, in a nutshell, the draw is personal prerogative. For a band whose testy relationship with former label EMI drew headlines a few years ago, liberation from the influence of music executives means a refreshing divergence from the industry status quo. And it allows Radiohead to orchestrate the sort of collective listening experiences all but extinct in today's fragmented media landscape. The timing thing is probably a nod in this direction as Radiohead has been working on the album since May 2009, building intrigue, inviting listeners to revisit the discography in the absence of new material.

Later on in his essay, Greenwood lamented that even amid all the progress the Internet has enabled, music's rebirth as a digital medium still left something lost in translation, that music has become "the poor cousin of software." He continued: "I'm unconvinced that the Internet has replaced the club or the concert hall as a forum for people to share ideas and passions about music."

To some, the release of "King of Limbs" -- both its physical and digital incarnations -- might seem like nothing more than an experiment in semantics. Regardless how Radiohead might deign to package their songs, the music itself should define the experience.

What Greenwood and the rest of Radiohead would probably argue, though, is that the two are inextricably linked. "Analog" isn't just a dirty word for an antiquated format. Rather, the experience of music necessarily occurs in context. (Insert your favorite Marshall McLuhan footnote here.)

So here we are. The morning after an elaborate fete saturated with 808s, Auto-Tune and Internet-born sensations, the world's most influential and enigmatic rock stars came down from the mountain with a "newspaper album." Maybe analog isn't dead just yet, after all.