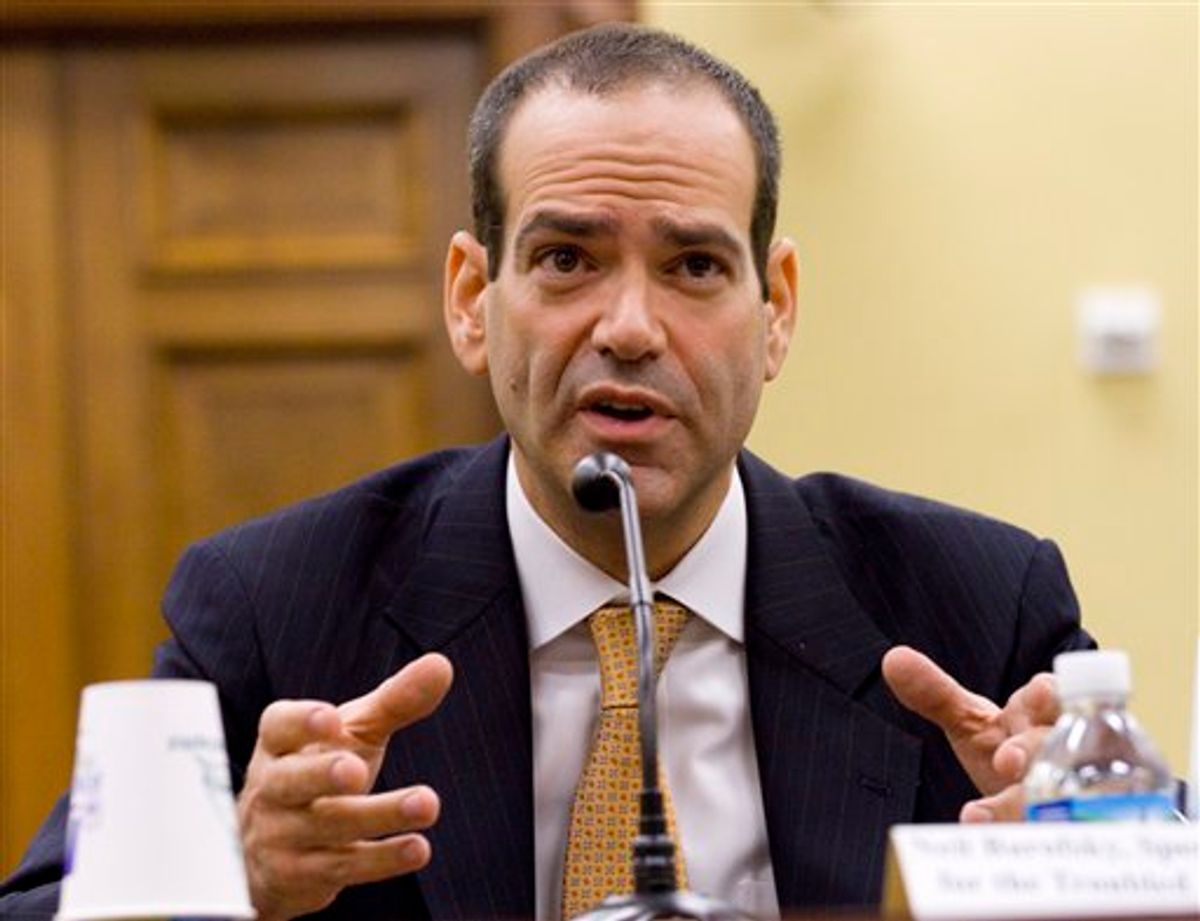 FILE - In this April 22, 2010 file photo, Neil Barofsky, Special Inspector General for the Troubled Asset Relief Program testifies before the House Appropriations Subcommittee on Financial Services and General Government on the Financial Crisis and TARP program on Capitol Hill in Washington. Barofsky says in a report released Tuesday, Jan. 25, 2011, that recent comments by Treasury Secretary Timothy Geithner and other top regulators suggest the government would rescue banks if one of them threatened the broader financial system. (AP Photo/Harry Hamburg, File) (AP)
--

In late 2008, former federal prosecutor Neil Barofsky was appointed to oversee the Treasury Department's administration of the $700 billion Wall Street/TARP bailout, and in that position, he has easily been one of the most impressive and courageous political officials in Washington.  A life-long Democrat who donated money to the Obama campaign, he vigilantly fought for his independence  as TARP watchdog and has been relentless in his criticism of Treasury officials and especially Tim Geithner.  The Washington Post reports today that Barofsky is resigning from his position, and the otherwise routine article by reporter Bradley Dennis contains this passage:

[Barofsky] quickly emerged as an aggressive overseer, viewed as a much-needed cop monitoring for waste and fraud within TARP by some lawmakers and watchdog groups, and, by Treasury officials and financial-industry representatives, as a self-promoter whose overreaching investigations scared some needy banks away from participating in the federal aid program. . . .

In his sometimes scathing reports to Congress, Barofsky showed little reluctance in criticizing administration officials on everything from how their lack of transparency was fueling "anger, cynicism and distrust" to how their foreclosure prevention efforts had fallen well below expectations.  Barofsky was particularly hard on the government's bailout of insurance giant American International Group, saying that the Federal Reserve Bank of New York -- which was led at the time by now-Treasury Secretary Timothy F. Geithner -- "refused to use its considerable leverage" and instead paid AIG's trading partners in full on the firm's debts.

Such criticisms did not sit well with Treasury officials, many of whom believed Barofsky's conclusions were overstated and aimed primarily at drawing media attention.

"We're fine with critics," said one Treasury official, who spoke on condition of anonymity in order to speak more candidly. "[But] he's been consistently wrong about a lot of big things."

Just ponder the utter cowardice and lack of professionalism needed to produce this passage.  First, some aide to Timothy Geithner wanted to publicly slam Barofsky on his way out the door, but lacked the courage to attach his name to the criticism.  So he told this Post reporter that he'd be willing to provide a derogatory quote about Barofsky, but only if he could hide behind anonymity when doing so.  Barofsky has stood behind his public criticisms by putting his name on his reports and appearing unmasked in interviews, but this Geithner lackey is too afraid to do that.  So he demands that the Treasury Department be allowed to malign him while hiding behind the Post's protective shield.

Then, the Post reporter, so desperate to include criticism of Barofsky for the sake of "balance" and in order to curry favor with the administration, agrees to channel the insults about Barofsky while concealing the identity of this Treasury critic -- for absolutely no good journalistic reason.  Remember, this isn't some powerless whistle-blower granted anonymity to expose wrongdoing by someone in power.  It's the opposite:  Barofsky is on his way out, and this official is still at Treasury, undoubtedly doing the Secretary's bidding.  Worse, the criticism is completely uninformative; it's just an unspecific insult claiming that Barofsky has "been consistently wrong about a lot of big things" without identifying a single alleged error.  So anonymity is granted to allow a powerful government official to publicly malign someone in the most unaccountable manner possible.

Then, the Post editor assigned to this article decides that this is a proper use of anonymity -- despite the Post's history of humiliations due to excessive anonymity, its supposed policy of granting it only in rare and justifiable cases, and the repeated warnings by its own Ombudsman that its promiscuous use of anonymity is rapidly eroding its "credibility" even with its own readers:

For decades, ombudsmen have complained about The Post's unwillingness to follow its own lofty standards on anonymous sources. Readers, who care about the quality of The Post's journalism, persistently object to anonymity they see as excessive and incessant. The problem is endemic. Reporters should be blamed. But the solution must come in the form of unrelenting enforcement by editors, starting with those at the top.

The only possible conclusion is that they don't care in the slightest about the "lofty standards" to which they so pompously claim to adhere.  They're far more interested in currying favor with high-level political officials by allowing them to malign and smear whomever they want -- even in the most gossipy and substance-free ways -- without a shred of accountability.  Episodes like this one are extremely common in Washington political and media circles, which is why they're periodically worth noting.  The level of cowardice required of a high-level political official to publicly smear someone this way while hiding their identity, and the level of shoddiness and eager-to-please subservience required for reporters and editors to enable that, is just remarkable.  But that's who runs Washington's political and media institutions, and that explains much about what it produces.  Episodes like this one are a healthy reminder of that.