A seat is suddenly open in Arizona, and a respected congressman already trails the sheriff who locks up immigrants 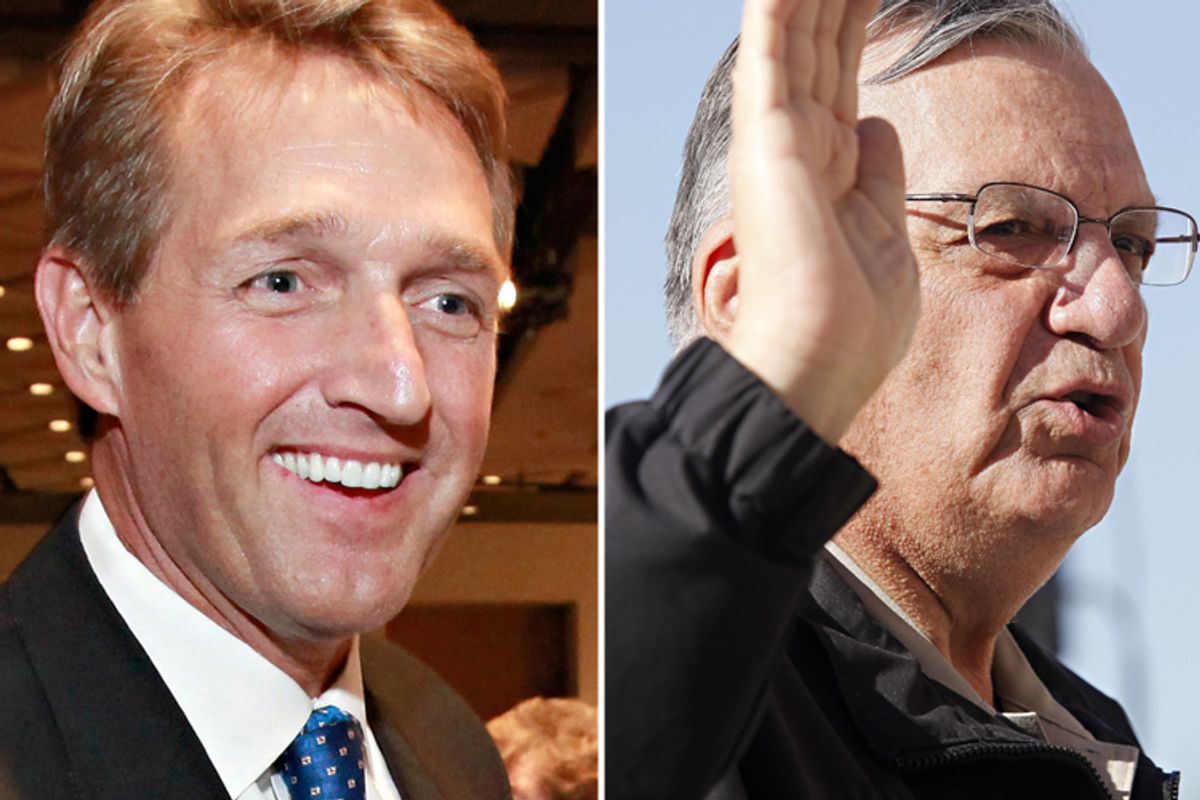 Jon Kyl, the longtime Republican senator from Arizona, will retire from the Senate when his term is up in 2012. So far, the only candidate to enter the race officially is Rep. Jeff Flake, who is famous for hating earmarks, mostly.

Flake voted against TARP and is supported by the powerful Club for Growth. He leans about as libertarian as any elected Republican not named "Paul." He voted to repeal "don't ask, don't tell." (Though he did vote to ban gay marriage, and renew the PATRIOT Act.)

He is also pro-immigration. He supports comprehensive reform and paths to legal residency and citizenship for undocumented immigrants.

So even though no one else has entered the race yet, and despite the support of the Club for Growth, when actually polled, Arizona Republicans quickly thought of someone they liked better: "Sheriff Joe" Arpaio, whose primary qualification for the job is that he locks up and tortures Mexicans for a living.

It is, obviously, pretty early to be polling the race, but likely GOP primary voters chose Arpaio over Flake 21 percent to 17 percent. (Six percent would like to vote for Ben Quayle.)

While hating earmarks is very faddish right now, hating immigrants is a timeless element of conservative populism, even if the money people behind the Club for Growth and various Tea Party organizations are actually pro-immigration.

Arpaio these days is rounding up immigrants and charging them -- baselessly -- with class four felony forgery, so that he can hold them without bail. (He is also forming a "special unit" to go after people who undermine the state's medical marijuana law. And, weirdly, advising his deputies to avoid going to McDonald's, because immigrants might yell at them.)

I actually don't think Arpaio would run for Senate, because a county sheriff has a lot more direct power to punish and humiliate people -- all while relentlessly self-promoting oneself -- than one junior senator. A senator can vote to keep Guantánamo open, sure, but a sheriff gets to actually set up little camps and frog-march his prisoners around town.

If Arpaio doesn't run, Flake may have to move opportunistically to the right, like John McCain did to win reelection, or risk losing the nomination to someone more comfortable with a little hysterical immigrant-bashing.