Are the chickens finally coming home to roost for the controversial prime minister? 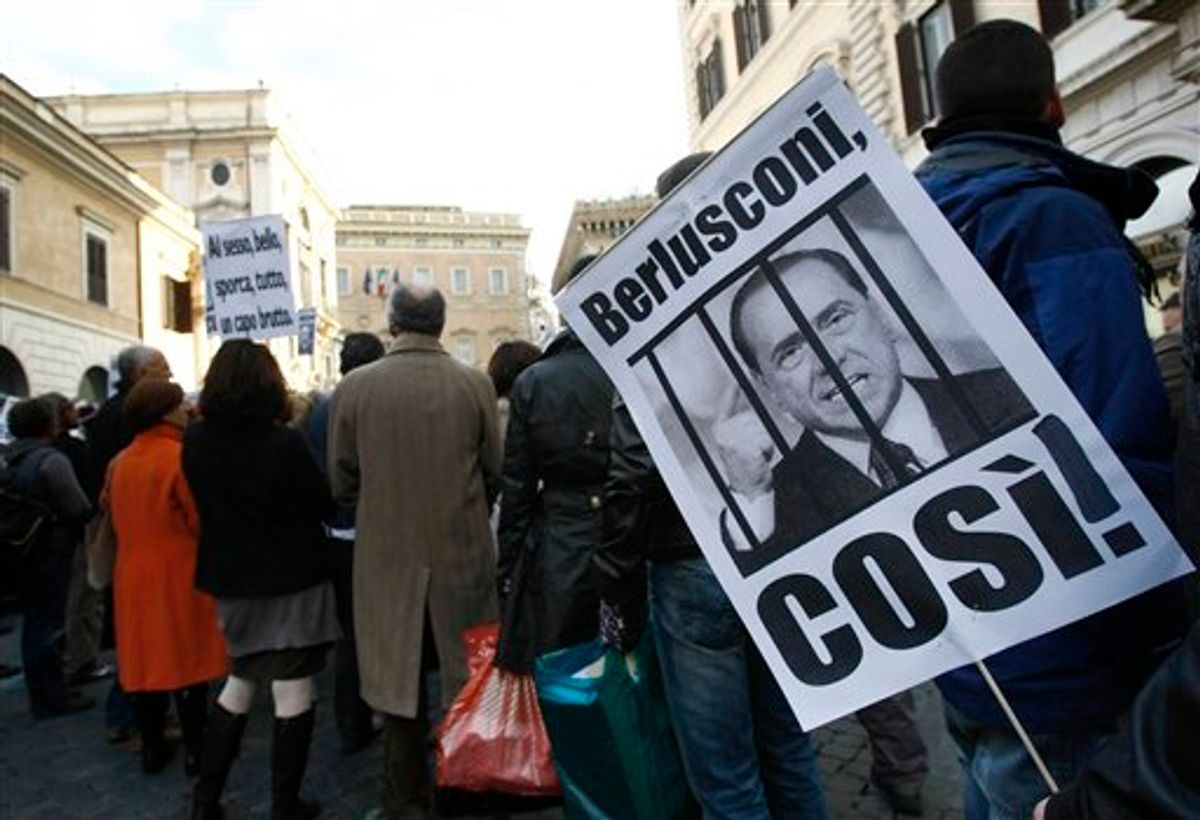 A demonstrator holds a banner with a picture of a caged Berlusconi during a protest against Italian Premier Silvio Berlusconi, in Rome, Saturday, Feb.12, 2011. Protestors are demanding Berlusconi's resignation following allegations he paid for sex with a 17-year-old girl and used his office to cover it up. Italian prosecutors want to put Italian Premier Berlusconi on trial for the allegations. Berlusconi has dismissed the allegations as a smear campaign. "I'm not worried in the slightest," Berlusconi said of the prostitution case. "I am a wealthy gentleman who can spend the rest of his life building hospitals for children like I've always wanted to." The banner reads: "Berlusconi, like this!". (AP Photo/Pier Paolo Cito) (AP)
--

Italy's Silvio Berlusconi, who has dodged corruption trials and no-confidence votes with the skill of an Olympic athlete, faced a potentially fatal challenge to his power Tuesday when a judge ordered him tried on prostitution and abuse of power charges.

Berlusconi is going on trial April 6 in Milan on charges that he paid for sex with a 17-year-old Moroccan girl and then tried to cover it up. Berlusconi has stood trial on a number of business-related charges, but this is the first time the 74-year-old billionaire businessman is being tried for personal conduct.

The premier has called the accusations "groundless" and dismissed the case as a "farce," accusing prosecutors of seeking to oust him from power.

Judge Cristina Di Censo handed down the indictment with a terse statement. The trial will be heard by a panel of three judges, all of them women. The decision means Di Censo believes there is sufficient evidence to subject Berlusconi to an immediate trial, as had been requested by prosecutors. The speeded-up procedure skips the preliminary hearing stage and is ordered in cases of overwhelming evidence.

There was no immediate comment from Berlusconi. He skipped a planned appearance at a news conference in Sicily about immigration, and was returning to Rome.

"We didn't expect anything different," one of Berlusconi's attorneys, Piero Longo, was quoted as saying by the Affaritaliani website.

Still, the indictment adds to his troubles as the three-time premier is politically vulnerable following a split with an ex-ally, and will increase the pressure on him to resign -- a possibility he has repeatedly rejected.

The opposition pressed its case for Berlusconi's resignation again Tuesday.

"Leave the premiership, let us not be the laughing stock of the world," said Alessandro Maran of the leading opposition Democratic Party. "Free Italy."

Prosecutors allege Berlusconi paid for sex with the Moroccan girl nicknamed Ruby, then used his influence to get her out of police custody when she was detained for the unrelated suspected theft of euro3,000 ($4,103). They allege that Berlusconi called police the night of May 27-28 because he feared that her relationship to him would be revealed.

Berlusconi has not denied making the phone call, but said he did so because he wanted to avert a diplomatic incident. His supporters have claimed that Berlusconi believed Ruby to be the niece of Hosni Mubarak, the recently ousted Egyptian president.

Ruby was eventually released into the custody of a Berlusconi aide, who also is under investigation with two other confidantes.

Both Berlusconi and Ruby, who has since turned 18, have denied having sexual relations, although she has said Berlusconi gave her euro7,000 ($9,550) on their first meeting.

Judges are assigned to each case through a computer system aimed at ensuring that the selection is random. In this case, it selected three female judges just days after tens of thousands of women staged rallies across Italy to denounce Berlusconi's conduct with young women, which they say degrades female dignity.

Berlusconi has made no secret of his admiration for beautiful women, and made no apologies for it. But he said, in response to Sunday's demonstration, that he has always valued female workers in his companies and sought to promote their hard work.

The trial could take months -- even years -- given the number of cases against him at the moment. His lawyers could seek to annul hearing dates, claiming conflicts with state business.

The trial brings to four the number of judicial cases Berlusconi is currently battling. They will all be starting or resuming in coming weeks, after Italy's highest court recently watered down an immunity bill his government had sponsored to suspend the trials.

Berlusconi is charged in a tax fraud case relating to his Mediaset media empire, and charged with bribery in another case. Another tax fraud case, but pertaining to more recent events than the ongoing Mediaset trial, will continue with a preliminary hearing next month.

Berlusconi has always denied wrongdoing in the many cases involving his media holdings, and has either been acquitted or seen the statute of limitations expire -- something that is considered likely in two of the trials now under way.

He has long contended he is the victim of a political vendetta orchestrated by what he says are left-leaning prosecutors.

Berlusconi was elected to his third-term as premier in 2008. The next scheduled elections are in 2013.