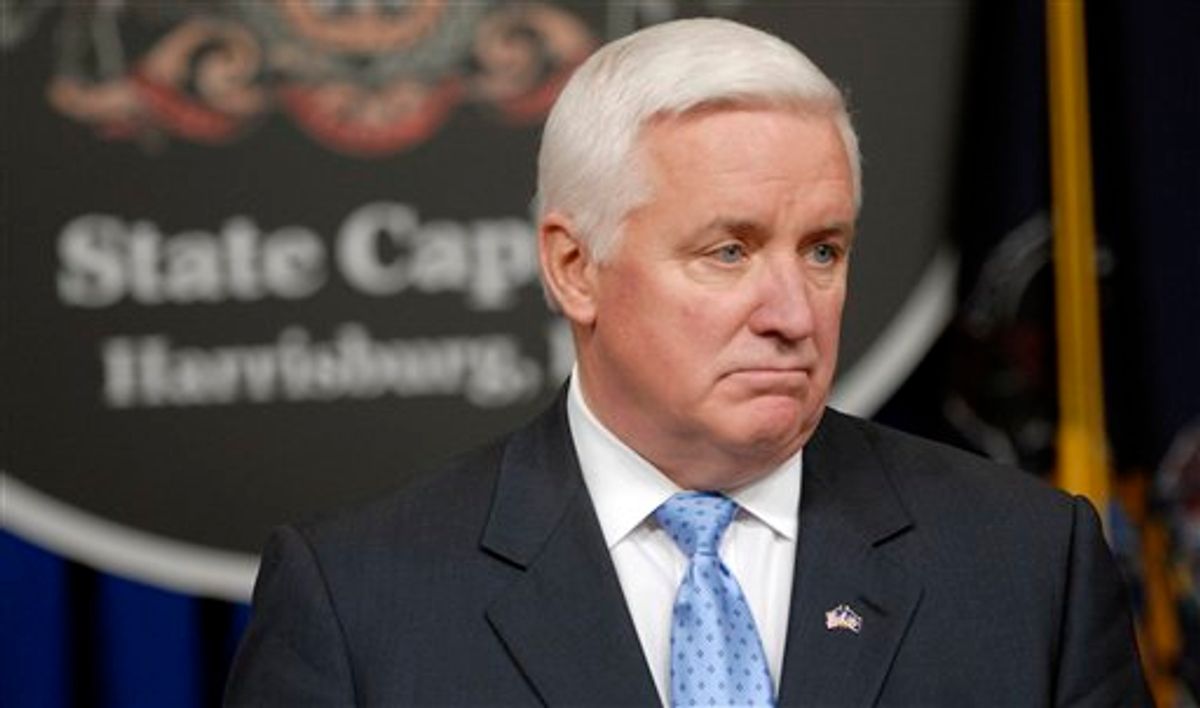 Some state employees have been fired and two Pennsylvania agencies have overhauled their regulations in the wake of allegations that a Philadelphia doctor performed illegal abortions that killed a patient and viable infants, Gov. Tom Corbett announced Tuesday.

"It happened because people weren't doing their jobs, plain and simple," Corbett said.

Corbett said four attorneys and two supervisors at the departments of Health and State were either fired or resigned on Friday and that eight other employees involved in the internal investigation remain on the state payroll. Others had previously resigned, he said.

"This doesn't even rise to the level of government run amok," Corbett said at a Capitol news conference at which he described his administration's actions in the month since Dr. Kermit Gosnell and eight employees of his West Philadelphia clinic were charged criminally.

"It was government not running at all," Corbett said. "To call this unacceptable doesn't say enough. It's despicable."

Corbett said the Department of State, which licenses medical professionals, has changed how it handles complaints and now requires more detailed reports. It also will train lawyers on investigative procedures, rules and regulations, and how to prosecute complaints, he said.

At the Health Department, which was not performing systematic checks of the state's abortion clinics for more than a decade before Gosnell's clinic was raided last year, yearly inspections are now mandatory and the results will be posted on the state website.

"Laws are already on the books that should have prevented this situation," Corbett said. "The correction needs to take place inside the two agencies assigned to oversee them, so my administration has drawn up a set of guidelines or protocols."

A Corbett aide identified the employees who left the state work force on Friday, but would not specify who had been fired and who resigned.

Corbett said some people have been suspended while they investigate further. Corbett press secretary Kevin Harley later added that some people involved in the probe remain on the job, because they "have certain rights" as union members.

Corbett deflected questions about one of the grand jury's most explosive findings: that political considerations involving the issue of abortion led state regulators in the 1990s to cease systematic inspections of abortion facilities.

The 300-page grand jury report that led to the charges against Gosnell, his wife and his former employees said state regulators ignored complaints about him and the clinic. The jury also said testimony by some Health Department officials "enraged" them.