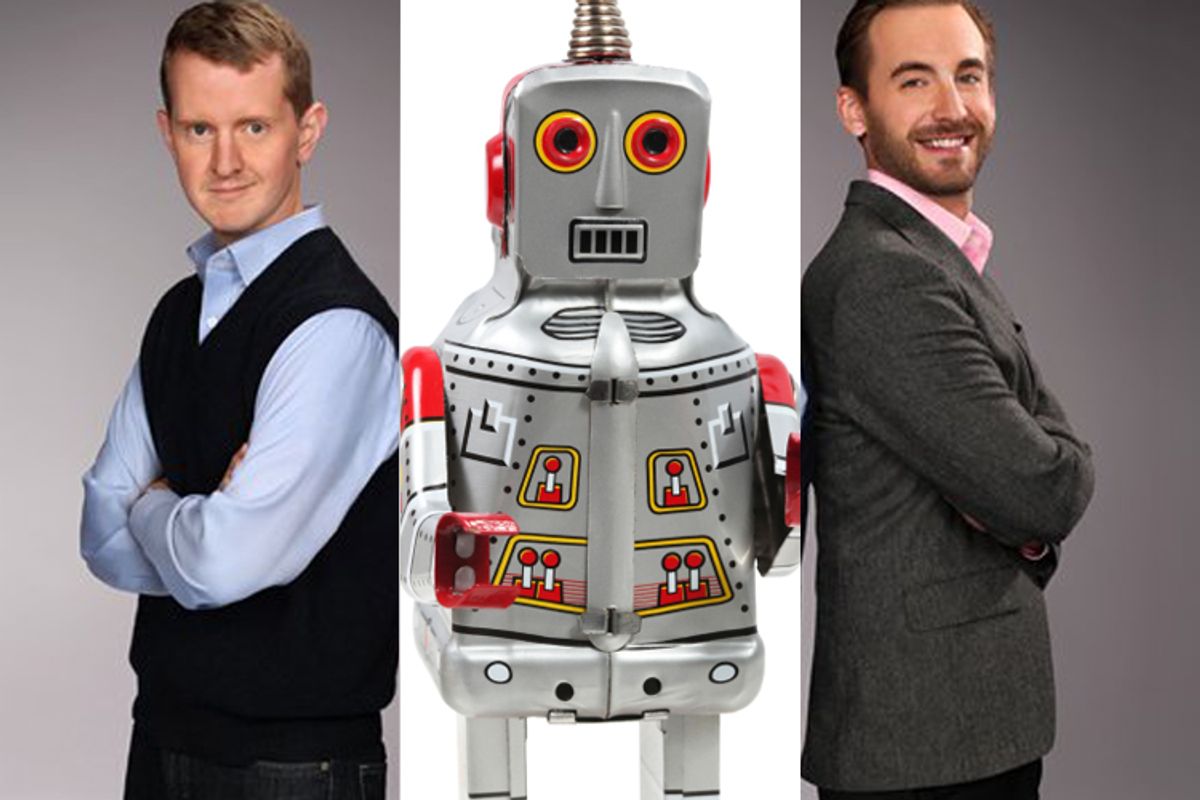 It's all fun and games until the human race is enslaved by our robot overlords. But first, they have to get through Ken Jennings. On "Jeopardy" Monday, quiz show history was made when legendary-in-geek-circles champions Ken Jennings and Brad Rutter pitted themselves against IBM's supercomputer Watson, a battle in which the dignity of our entire species lay on the line.

The idea of man-against-machine competition is a source of constant fascination, one in which the dark fear that we could be bested by our creations always lurks right underneath the surface. Everybody may love GPS, but nobody wants to wind up in the Matrix. And as technology leaps forward at an increasingly breathless pace, the possibility of our obsolescence starts to seem less like science fiction and more like straight up science.

In a story for Time earlier this month, author and futurist Ray Kurzweil predicted that by the next decade, computers will be on par with human level intelligence, and by 2045 "artificial intelligence created will be about a billion times the sum of all the human intelligence that exists today." Think of all the free time we'll have to play video games when computers are curing diseases and fixing the ozone and looking up the names of minor "Facts of Life" cast members for us. Or maybe we'll be busy hanging with our artificial BFFs -- MIT professor Cynthia Breazeal believes that we are entering the age of "Star Wars"-type "personal robots," companions with "social-emotional intelligence" who can become "a meaningful, empowering and enriching part of our everyday lives." Given how rare quality social-emotional intelligence is among humans, it's enough to make a species despair for itself.

It's that curious, uniquely human unease we have with our creations, that quest for meaning in it all, that compels us to periodically drag ourselves into the gladiator arena of knowingness, hoping that flesh can still somehow outdo circuitry. But humanity doesn't always fare well in these contests of its own design. In 1997, IBM had its Deep Blue computer wage chess war against World Chess Champion Garry Kasparov -- and Deep Blue kicked him right in the bishop, defeating him by one game in a six-game match.

And now, 14 years and a kabillon technological advances later, IBM has returned to show off the future of artificial intelligence in the greatest field of dramatic competition imaginable – Alex Trebek's stage. Watson, you see, is no mere million-dollar chess player. And he isn't just some talking version of Wikipedia, either. Four years in the making, he's been designed not just to process information but the nuances of language, making "Jeopardy's" trademark combination of trivia and wordplay the ideal venue to show off his stuff.

So for three nights this week, IBM's new super smarty-pants is facing down no less formidable an opponent than the human mind. On his first night out, Watson -- no doubt so named because "Sherlock" would sound just a little too cocky -- held his own against two all-time champs. Represented by a smaller, flat-screened and eerily glowing version of his true self (he's much bigger in person), Watson performed more than capably, sailing confidently to an early lead. Ultimately, however, he stumbled in very computer-like ways, repeating a wrong answer that had already been given, and prompting Trebek to scold, "No, Ken already said that." Computer feel shame! Computer no understand this new sensation! Computer ... Overload ... Daisy ... Daisy ...

Of course, that didn't happen. Watson didn't seem fazed in the least. And in the end, he and Brad Rutter tied for the evening with $5,000 apiece. It's too bad the thing is only an exhibition game, with half of the proceeds going to charity. I'd like to imagine Watson blowing his winnings on extra terabytes and Japanese love dolls.

Despite the freak factor of having a less-charismatic-than-usual "Jeopardy" contestant answer questions in the form of questions in a flat, ominous monotone, the real competition here is already all but over. Whether or not Watson vanquishes his two flesh and blood opponents over the next two nights, IBM is going to keep making supercomputers, and they are going to keep getting smarter. That's not a loss for the human spirit, imagination or heart. It's just a fact. Watson still can't offer much in the way of charisma or empathy. He can't get drunk down the shore with Snooki, and he likely won't be delivering any impassioned, eviscerating tirades on "The Daily Show" any time soon. He's just a really smart box, one who even gets puns. He may be a "Jeopardy" champ, and he may even eventually make our jobs irrelevant. But why we watch, why we care, isn't about trivia questions. It's about whether he'll eventually be like us, with all our dopey jokes and mistakes and pains. He may be smart and even mildly socially skilled, but he still can't feel existential angst like something with a cortex.