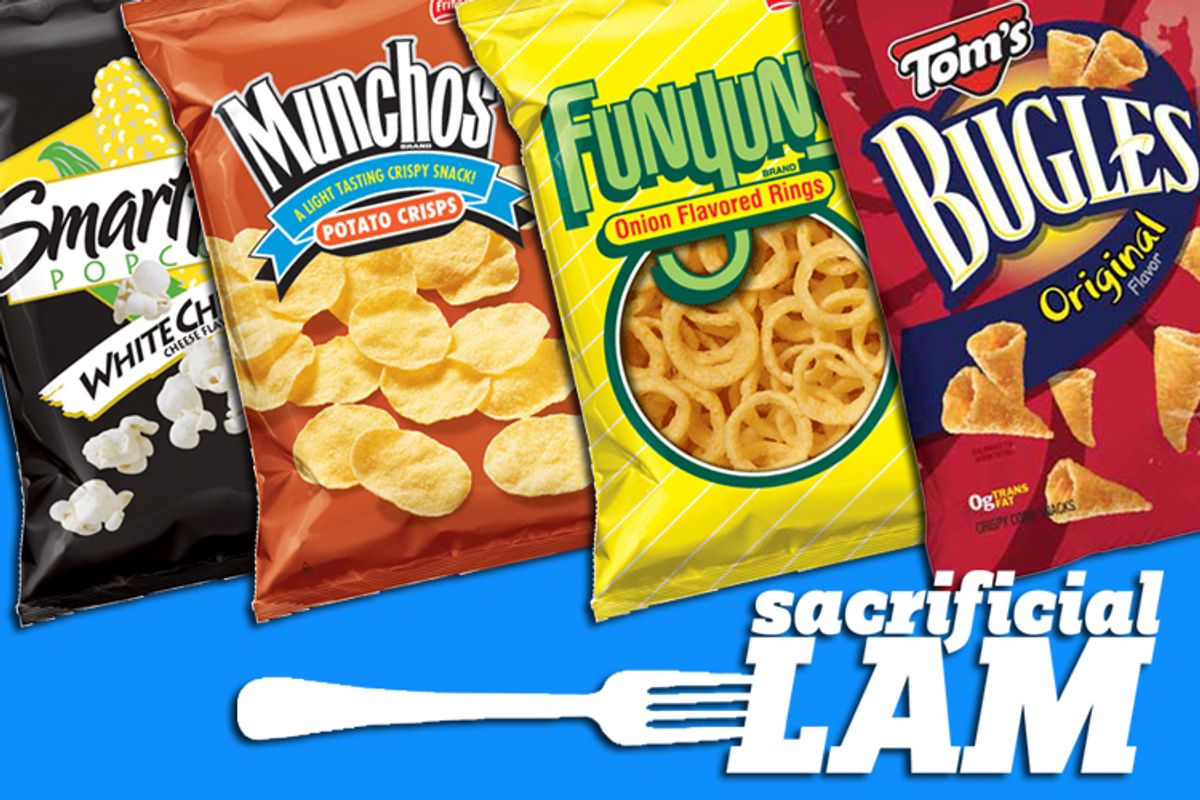 Mark these words, friends: We will soon be living in a Bugles moment. "A what who?" Yes, a Bugles moment. Soon, every with-it food coolguy will be crunching on Bugles, those horn-shaped corn chip-like-ish things, which I thought I stopped seeing on the open market some time during the Bush years. The first Bush years.

But they're going to be hot. I know this because Alex Van Buren, intrepid food media maven, e-mailed me about them a few weeks ago, and then Adam Rapoport, Bon Appétit magazine's manimal new editor in chief, tweeted about them not long after. (Presumably because he likes them, though it's also possible it's because they are the snack that look most like his manimalistic $800 Ralph Lauren wingtips.) This, friends, is how the food-trend sausage gets made.

Anyway, now that I'd committed to following these cats' advice and try Bugles again, I started thinking about other snacks of my youth, and why we don't see Munchos, Funyuns and Smartfood as much as we used to, either. So this week, I took my change to the corner store and put my blood pressure on the line to give each of these salty, salty sirens a try.

Bugles (original flavor): It's not clear to me why these fell out of favor; maybe one too many would-be fans opened up the box (because they used to be packaged in totally sweet boxes), poured out the Chex-looking snacks into a big bowl of milk only to be disgusted that they were now eating soggy corn chips, not cereal. Or because, during the no-fat, no-fun '80s and '90s, people started to be all, "Oh God, those things are fried in coconut oil! That's, like, a saturated fat!" But taking a deep whiff inside the bag is pretty exciting -- it smells exactly like a bag of instant ramen. (OK, so it's exciting depending on how you feel about instant ramen.)

The texture is lovely, crisp and light, their weird horn-shape actually making a big difference; your teeth start the crunching process only to find no resistance in the hollow center; it's a tactile illusion that emphasizes lightness. But then the flavor kicks in, a toasty, richer version of Fritos, vaguely sweet and ... bacony from the heavy coconut fat. Holy cow. These things are good.

Munchos: Opening the bag is a subtle but heady experience. The aromatized air puffs forth, the smell of pure, clean deep-fry surrounds you. It's like how your hair smells the morning after the carnival, that is, if your carnival past took you more toward hanging out by the corndog stands and not, like, smoking various drugs and having sex with carnies. (This is not a bad thing. I'm talking specifically about the aroma, but hey, who am I to judge?)

They are, as advertised, a "light tasting crispy snack," in that they are very crisp and have remarkably little flavor. Well, except for saltiness, which it has in spades. Imagine Pringles but airier and minus 75 percent of the potato flavor, with a touch of corn meal in the mix to give them just a little more fullness on your tongue. Salon news editor Steve Kornacki, a man whose personal diet is roughly two-thirds snack foods, declared, "It's like a rice cake mixed with a potato chip." Which might not sound good to you, but the man kept reaching for more.

Smartfood White Cheddar Popcorn: I remember when these things started getting traction, in the late '80s, and even at 10 years old I realized how hilarious their marketing jujitsu was. I mean, you take oil-popped popcorn, smother it in cheese-flavor powder, call it Smartfood, and watch everyone gobble it down like it was healthy. (Fun fact: The people who originally invented Smartfood, before it was bought by Frito-Lay, went on to make Annie's Natural, the "good" boxed mac-n-sleaze.)

And now, 25 years later, they're still playing their little sleight of hand. The bag reads, "Is it really smart to let yourself fall in love with a snack? Of course it is! [And now watch as we studiously suggest -- with words like "fresh" and "light" -- but do not ever actually assert that these are any less fat-saturated fat- or sodium-filled than other snacks.]"

But this is what I want to say to them: Put away our trickery, your obfuscation, your artful dodging, friends. Because what you make might kill us all, but we will go down happy. Because it is freaking delicious. The popcorn straight-up melts on your tongue, with just a tiny crackle at the end, and the delicious, rich, just-slightly-tangy flavor of cheese-ish blooms, filling your mouth with big dumb happiness.

Funyuns: You know, I'm not actually able to write on these -- the pork rinds of the vegetable world -- impartially, so here are the comments of my Salon colleagues, carefully chosen to reflect how I personally feel about things (see how journalism works?):

Sarah Hepola, culture editor: "It's been literally 20 years since I've had one of these. [Pulls one out of the bag, considers it for a half-second.] %#$& yeah! It gives me the same satisfaction of ramen noodles. Is it MSG? It's incredibly salty, powerfully tasty. Very chemical. But ... I would eat 500 of these. So get them out of my office. Now."

Thomas Rogers, deputy arts editor: "It's like someone tried to make an onion ring out of dust. And they succeeded, surprisingly!"