He doesn't believe in "denouncing" the KKK's first Grand Wizard?! Will the GOP actually nominate this man in '12? 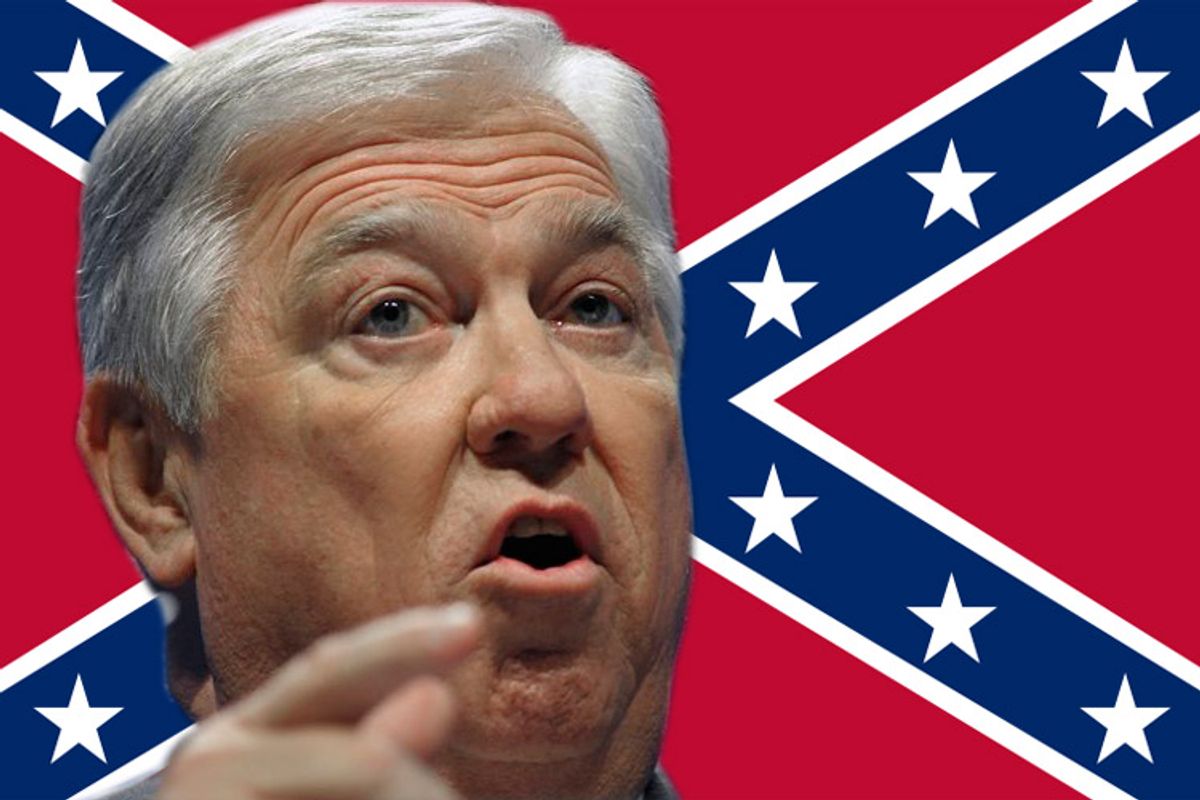 Not for the first time and probably not for the last, Haley Barbour just demonstrated that he doesn't know how to address racially sensitive subjects in a way that will resonate with anyone other than (some) white Southerners.

At a press conference on Tuesday, Mississippi's Republican governor -- who is now clearly pursuing the 2012 Republican presidential nomination -- was asked about a proposal from the state's chapter of the Sons of Confederate Veterans to issue a license plate commemorating Nathan Bedford Forrest, the Confederate general who went on to serve as the first Grand Wizard of the Ku Klux Klan. As we noted last week when the proposal first made news, there was a good chance Barbour would be able to duck this particular issue, since the plan had yet to even be introduced as a formal piece of legislation. And yet:

Mississippi NAACP president Derrick Johnson said it's "absurd" to honor a "racially divisive figure" such as Forrest. Johnson has also called on Barbour to denounce the license plate idea.

Asked about the NAACP's stance Tuesday, Barbour replied: "I don't go around denouncing people. That's not going to happen. I don't even denounce the news media."

From a political standpoint, it's baffling why Barbour, a former Republican National Committee chairman and elite D.C. lobbyist who's often heralded for his unusual political "savvy," would do this. After all, as he also said at Tuesday's press conference, the odds of the license plate plan ever landing on his desk as governor (his term expires at the end of this year) are slim to none. He could have simply called the whole matter a non-issue and left it at that. Or said that he understands why the state's NAACP leader feels that way about Forrest but that he considers the issue academic since the plan is going nowhere in the Legislature. But instead of treading lightly and steering clear of the uproar that has now ensued, he basically took a shot at the NAACP for having the audacity to speak out against the first Grand Wizard of the KKK. It's like he can't help himself. The boy from Yazoo City who didn't think things were "that bad" in the segregated South still can't seem to understand why non-white Southerners would look with concern on the South's history.

The question is whether Barbour's difficulties in addressing race will hurt him in his campaign for the Republican presidential nomination next year. I've been arguing that it will, mostly because he will enter the race as a long-shot in a field that will feature multiple options for conservative voters; the potential complications of nominating someone with Barbour's baggage and tendencies to run against America's first black president should give candidate-shopping Republicans good reason to bypass him. In this sense, I was struck by this video, taken by Hot Air's Ed Morrissey, at last weekend's CPAC conference, in which a white supremacist tries to engage a group of attendees in a dialogue, only to be shooed away:

Granted, it doesn't take much courage to stand up to a lone white supremacist at a D.C. conference, but the attitudes of the conservatives in this video are striking. They clearly understand that associating with someone like Jamie Kelso (the white supremacist) is politically suicidal, but his ideas also offend them at a personal level. They may have their history wrong -- note the man at the 7:00 mark who tells Kelso that his ideas are a better fit for the Democratic Party because the horrors of Jim Crow were the product of Democratic politicians (failing to consider the sweeping partisan realignment triggered by the Democrats' embrace of civil rights in 1964, the same year the GOP nominated Barry Goldwater, who had joined the segregationist filibuster of the Civil Rights Act) -- but their outrage is sincere. These are the sorts of conservative activists and leaders, I imagine, who understand how tone-deaf Barbour is on race, and how problematic that could be for their party if they were to nominate him next year.