Hundreds of security forces use rubber bullets, tear gas and clubs in attempt to suppress protesters 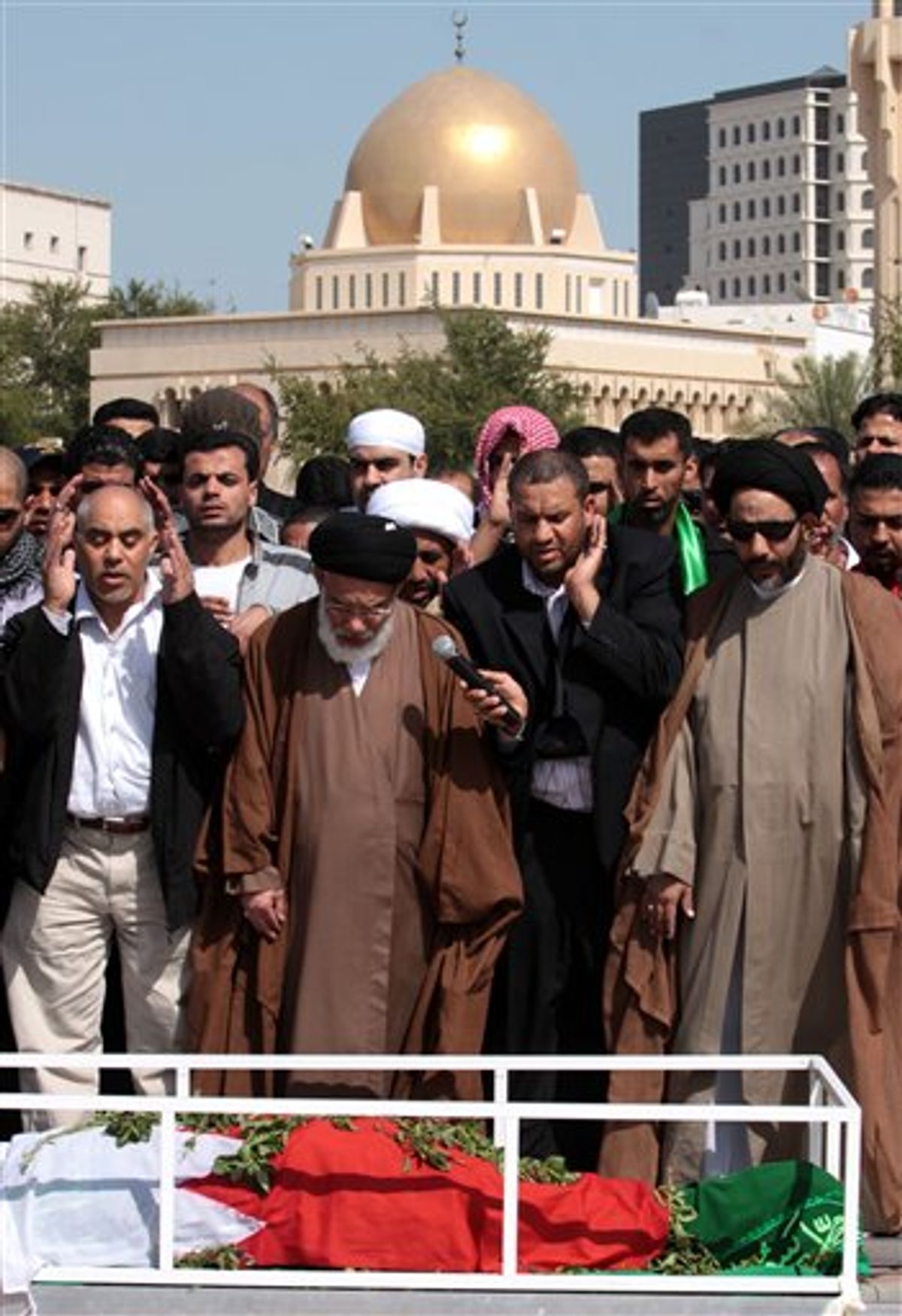 Mourners pray during the funeral for Fadhel Salman al-Matrook on Wednesday, Feb. 16, 2011, in Manama, Bahrain. Al-Matrook was killed Tuesday when police tried to stop a funeral march for another Bahraini killed in anti-government protests. Protesters demanding sweeping political reforms from Bahrain's rulers held their ground Wednesday in an Egypt-style occupation of the capital's landmark square, staging a third day of demonstrations that have brought unprecedented pressures in one of Washington's most strategic allies in the Gulf. (AP Photo/Hasan Jamali) (AP)
--

Riot police are using tear and clubs to try to regain control of a main square in Bahrain's capital occupied by anti-government protesters.

Hundreds of security forces carrying truncheons and firing rubber bullets moved into Pearl Square before dawn on Thursday. There was no immediate word on casualties.

The swelling protests against Bahrain's rulers gained momentum Wednesday with huge crowds calling for a sweeping political overhaul and the kingdom's stunned leaders appearing to shift tactics after attempts to crush the uprising stoked rage on the streets and sharp criticism from Western allies.

The widening challenges to the Arab world's political order -- emboldened by the downfall of old-guard regimes in Tunisia and Egypt -- also flared in Libya for the first time, with riot police battling protesters marching against the 42-year rule of Moammar Gadhafi.

In Yemen, the embattled president flooded the ancient capital of Sanaa with security forces to try to stamp out demonstrations that began nearly a week ago. They turned deadly Wednesday in the southern port of Aden, with two people killed in clashes with police.

"It's clear now that no Arab leader can truly feel comfortable," said Ali Fakhro, a political analyst and commentator in Bahrain. "Those days have been swept away."

It's also taken a big swipe at Western policy assumptions.

Tiny Bahrain has an outsized importance for Washington as home of the U.S. Navy's 5th Fleet, a counterweight to Iran's military expansion in the Gulf. Yemen is a strategic battleground against Islamic militants inspired by al-Qaida.

Even Gadhafi -- once an arch-foe of the West -- has been gradually rebuilding international ties and remains a mercurial, but well examined, factor in Mideast affairs.

In many ways, Bahrain is mirroring Egypt's uprising on a smaller scale and with malls and conference centers as the backdrop instead of the faded glory of Cairo's Tahrir Square.

Protesters have turned a landmark square in the capital of Manama into their base camp, which was swollen with tens of thousands of people by nightfall Wednesday. Their chants literally reverberated off the buildings and bridges. They sang the Egyptian national anthem. Their next important move takes a page directly from the Egypt unrest: calling for a major march after Friday prayers to re-energize its followers.

The ruling Sunni dynasty -- long accused of trampling the aspirations of Bahrain's Shiite majority -- has retrenched after unleashing security forces in street clashes that left at least two dead since Monday. Riot squads have hung back as the crowds took control of Pearl Square, dominated by a 300-foot (90-feet) monument to Bahrain's history as a pearl diving center.

An emergency parliament meeting was called for Thursday, but it may only serve to show the country's divisions and reinforce its image as the most politically volatile in the Gulf.

The main Shiite opposition bloc, with 18 of the 40 seats, has said it will not return to the chamber until the protest demands are met.

It began Monday as a cry for the country's Sunni monarchy to loosen its grip, including hand-picking most top government posts, and open more opportunities for the country's Shiites, who have long complained of being blocked from decision-making roles or key posts in the military.

But the uprising's demands have steadily grown bolder. Many protesters are calling for the government to provide more jobs and better housing, free all political detainees and abolish a system that offers Bahraini citizenship to Sunnis from around the Middle East as a way to close the gap with Shiites, who account for 70 percent of the population. Many of the newly minted nationals get jobs in security forces to further cement the number of presumed loyalists protecting the ruling system.

Increasingly, protesters are also chanting slogans to wipe away the entire ruling dynasty that has led Bahrain for more than 200 years and is firmly backed by the Sunni sheiks and monarchs across the Gulf.

Although Bahrain is sandwiched between two of OPEC's heavyweights, Saudi Arabia and Qatar, it has limited oil resources and depends heavily on its role as a regional financial hub and playground for Saudis, who can drive over a causeway to enjoy Bahrain's Western-style bars, hotels and beaches.

As night fell in the square, a Shiite imam extolled Bahrain's young people as the lions of reform.

Across the city, a caravan of cars from government supporters waved national flags and displayed portraits of King Hamad bin Isa Al Khalifa.

Social networking websites also were abuzz with calls to press ahead with the protests. They were matched by insults from presumed government backers calling the demonstrators traitors and agents of Shiite powerhouse Iran. Some pointed out that Iranian hard-liners have called Bahrain the Islamic Republic's "14th province" because of its Shiite links.

But the head of the largest Shiite political bloc, Sheik Ali Salman, said there are no demands for an Islamic role in politics.

"We are not looking for a religious government like Iran's, but we demand a civil government" that represents Shiites and Sunnis, he told a news conference.

Bahrain's relative calm Wednesday was in stark contrast with other Arab political showdowns. But all share efforts to escalate protests this week.

In Libya, security forces fired rubber bullets and water cannons at hundreds of marchers in Benghazi, the second-largest city. Witnesses said some police stations were set on fire and one protester said he saw snipers on a roof of a security headquarters firing on protesters.

The unrest was triggered by the temporary detention Tuesday of an activist but quickly turned into a rare public challenge to Gadhafi.

Video clips posted on the Internet showed protesters carrying signs and chanting: "No God but Allah, Moammar is the enemy of Allah" and "Down, down to corruption and to the corrupt." Activists using Facebook and Twitter have called for nationwide demonstrations Thursday.

In Yemen, meanwhile, more than 2,000 police fanned out across the capital Sanaa after six days of Egypt-style demonstrations against President Ali Abdullah Saleh, who has held power for 32 years.

The police fired in the air and blocked thousands of students at Sanaa University from joining thousands of other protesters in the capital of the Arab world's most impoverished nation. In the southern port of Aden, two people were killed when police fired on protesters.

A call spread via Facebook and Twitter urging Yemenis to join a series of "One Million People" rallies on Friday.

Dozens of Jordanians took to the streets outside King Abullah II's palace in the sixth straight week of protests, demanding that people be allowed to elect their prime minister.

Internet service in Bahrain was slow and spotty, but it appeared that authorities did not try to close it down fully.

But unlike vast Cairo, Bahrain is little more than a collection of towns and villages with just 500,000 native-born citizens and nearly the same number of expatriate workers. Word spreads easily by phone and from family to family.

Thousands turned out -- without any special call to organize -- for the funeral procession of 31-year-old, Fadhel al-Matrook, the second known fatality from the clashes. Later, in Pearl Square, his father Salman pleaded with protesters not to give up.

The bloodshed brought embarrassing rebukes from allies such Britain and the United States. A statement from Bahrain's interior ministry said suspects have been "placed in custody" in connection with the two protester deaths, but gave no further details.

In the past week, Bahrain's rulers have tried to defuse calls for reform by promising nearly $2,700 for each family and pledging to loosen state controls on the media.

Similar concessions have been made by leaders in the Gulf to try to pre-empt protests. In Oman, the ruling Sultan Qaboos Bin Said announced Wednesday an increase in the minimum monthly salary for private sector workers from 140 rials ($365) to 200 rials ($520).

As protesters in Bahrain settled in for another night in the square, the mood was more festive than tense. People sipped tea, snacked on donated food and smoked apple- and grape-flavored tobacco from water pipes. The men and women mainly sat separately -- the women a sea of black in their traditional dress. Some youths wore the red-and-white Bahraini flag as a cape.

The leadership of the protesters is still unclear and disorganized. A few scuffles have broken out between some of the people in the main area near the speakers' platform. But many tried to downplay the idea that the revolt is primarily for Shiite rights.

"The needs of the people are populist and not sectarian. We are not Shiite, Sunni or liberals," said Jassem Jawad, 23, a musician and part-time civil servant. "I am not a political man ... But I know I want a chance to pick my own prime minister. How is it fair for a prime minister to hold power for 39 years? Its ridiculous."