Senator: My colleagues left Wisconsin to force negotiations on a bill that is "tearing the state apart" 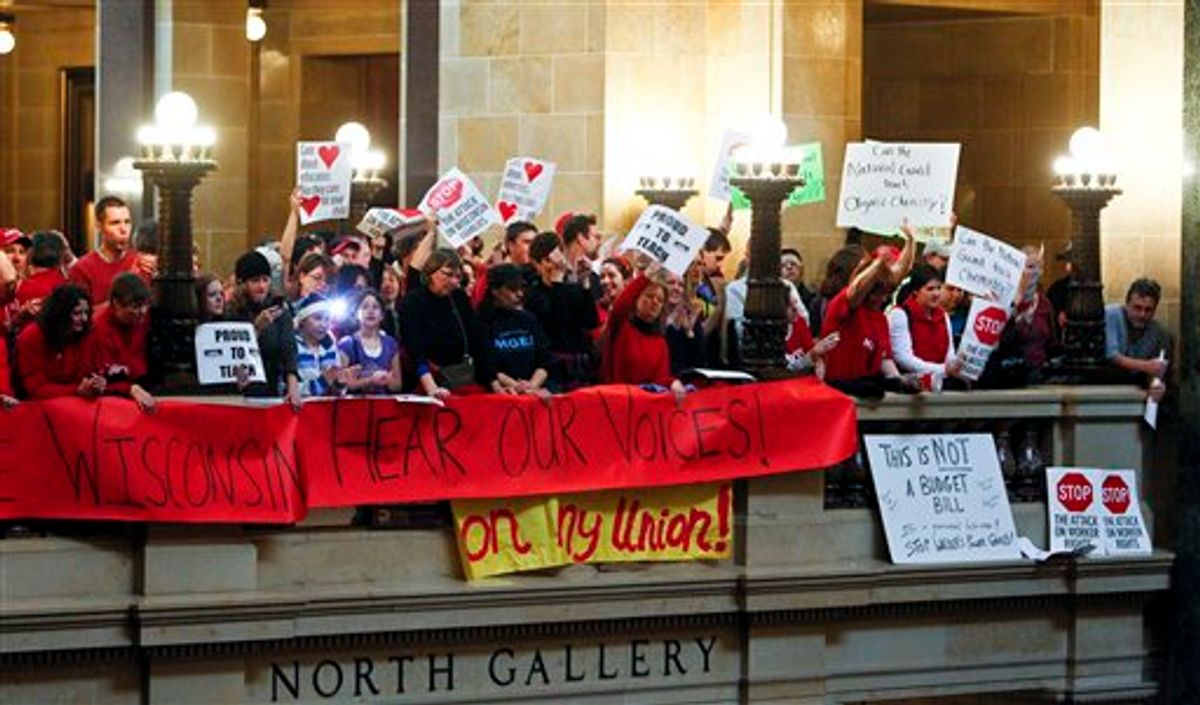 A Wisconsin state senator says the 14 Democratic lawmakers who are boycotting a vote on a controversial anti-union bill have left the state.

Sen. Jon Erpenbach says the group wants to force negotiations over the Republican-backed bill, which would strip most public employees of their collective-bargaining rights.

Erpenbach told The Associated Press that he and his colleagues had left Wisconsin, but he would not say where.

He said the plan is to slow down the bill because it's "tearing the state apart."

Senate Republicans can't vote on the bill unless at least one Democrat is present. Police could be dispatched to retrieve them, but it was unclear if they would have the authority to cross state lines.

Police officers were dispatched Thursday to find Wisconsin state lawmakers who had apparently boycotted a vote on a sweeping bill that would strip most government workers of their collective bargaining rights.

The lawmakers, all Democrats in the state Senate, did not show up when they were ordered to attend a midday vote on the legislation.

The proposal has been the focus of intense protests at the Statehouse for three days. As Republicans tried to begin Senate business Thursday, observers in the gallery screamed "Freedom! Democracy! Unions!"

Republicans hold a 19-14 majority, but they need at least one Democrat to be present before taking a vote on the bill.

"Today they checked out, and I'm not sure where they're at," Republican Senate Majority Leader Scott Fitzgerald said. "This is the ultimate shutdown, what we're seeing today."

Democratic Minority Leader Mark Miller released a statement on behalf of all Democrats urging Gov. Scott Walker and Republicans to listen to opponents of the measure and seek a compromise. His statement did not address where Democrats were or when they planned to return.

Bill opponents in the Senate gallery cheered when Senate President Mike Ellis announced that there were not enough senators present to proceed.

The bill came to the Senate after the Legislature's budget committee endorsed it just before midnight Wednesday.

Walker and Republican leaders have said they have the votes to pass the plan.

That didn't stop thousands of protesters from clogging the hallway outside the Senate chamber beating on drums, holding signs deriding Walker and pleading for lawmakers to kill the bill. Protesters also demonstrated outside the homes of some lawmakers.

Hundreds of teachers called in sick, forcing a number of school districts to cancel classes. Madison schools, the state's second-largest district with 24,000 students, closed for a second day as teachers poured into the Capitol.

Hundreds more people, many of them students from the nearby University of Wisconsin, slept in the rotunda for a second night.

"We are all willing to come to the table, we've have all been willing from day one," said Madison teacher Rita Miller. "But you can't take A, B, C, D and everything we've worked for in one fell swoop."

The head of the 98,000-member statewide teachers union called on all Wisconsin residents to come to the Capitol on Thursday for the votes in the Senate and Assembly.

"Our goal is not to close schools, but instead to remain vigilant in our efforts to be heard," said Wisconsin Education Association Council President Mary Bell.

The proposal marks a dramatic shift for Wisconsin, which passed a comprehensive collective bargaining law in 1959 and was the birthplace of the national union representing all non-federal public employees.

But so far, Democrats have been powerless to stop the bill.

"The story around the world is the rush to democracy," said Democratic Sen. Bob Jauch of Poplar. "The story in Wisconsin is the end of the democratic process."

In addition to eliminating collective bargaining rights, the legislation also would make public workers pay half the costs of their pensions and at least 12.6 percent of their health care coverage -- increases Walker calls "modest" compared with those in the private sector.

Republican leaders said they expected Wisconsin residents would be pleased with the savings the bill would achieve -- $30 million by July 1 and $300 million over the next two years to address a $3.6 billion budget shortfall.

Wisconsin has long been a bastion for workers' rights. It was the first state to grant collective bargaining rights to public employees more than a half-century ago. And the American Federation of State, County and Municipal Employees was founded in 1936 in Madison.

But when voters elected Walker, an outspoken conservative, along with GOP majorities in both legislative chambers, it set the stage for a dramatic reversal of the state's labor history.

Under Walker's plan, state employees' share of pension and health care costs would go up by an average of 8 percent.

Unions still could represent workers, but could not seek pay increases above those pegged to the Consumer Price Index unless approved by a public referendum. Unions also could not force employees to pay dues and would have to hold annual votes to stay organized.

In exchange for bearing more costs and losing bargaining leverage, public employees were promised no furloughs or layoffs. Walker has threatened to order layoffs of up to 6,000 state workers if the measure does not pass.