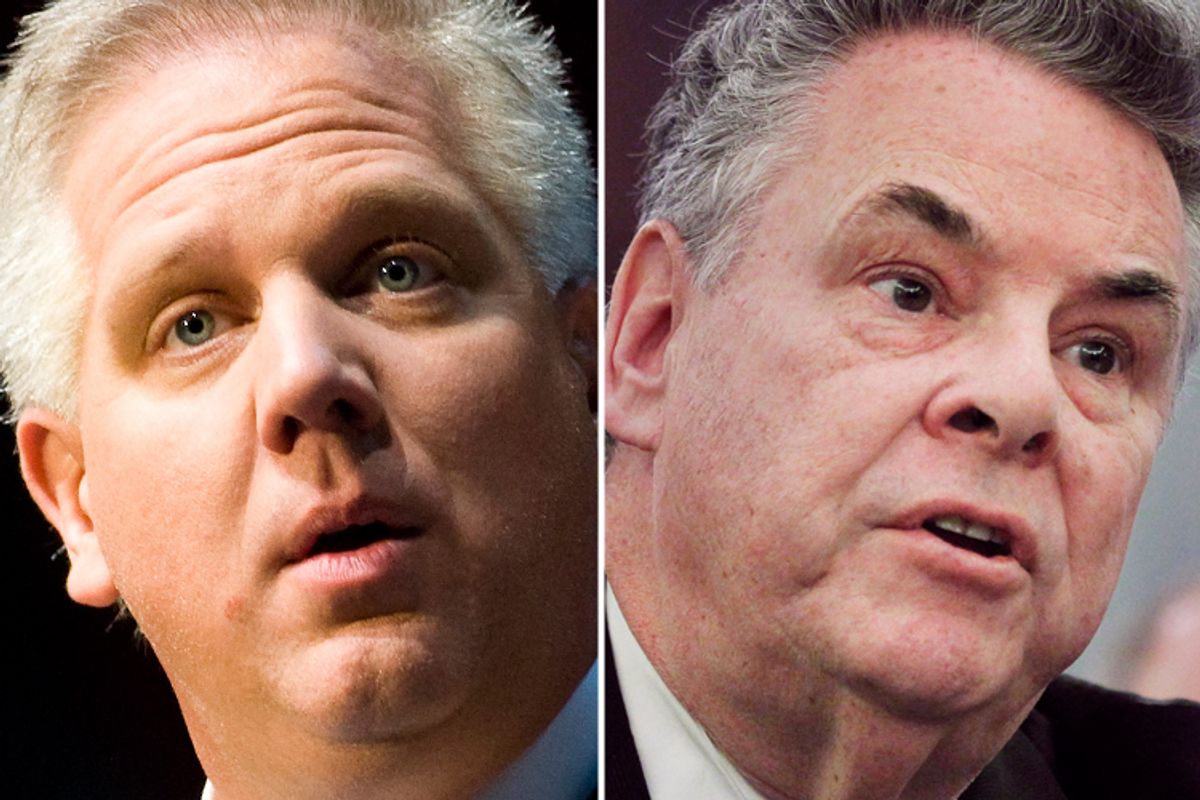 Rep. Peter King's, R-N.Y., forthcoming hearings on the supposed radicalization of American Muslims may end up being slightly less hysterical than they sounded when he proposed the idea.

King is a loudmouthed creep who frequently says bigoted things about American Muslims, but he looks like he's actually treading carefully when it comes to his hearings. To the dismay of some of his ideological peers, who were hoping their feverish imaginings about the American Muslim menace would be lent credence by the House of Representatives, King has declined to call some of the more extreme anti-Islam cranks to testify, and he has invited the participation of Muslim congressman Keith Ellison.

While it'd be a mistake to expect too much in the way of seriousness from the hearings, he made news yesterday by hiring respected journalist James Gordon Meek, formerly of the New York Daily News, to act as an investigator for the House Homeland Security Committee. Meek actually knows his stuff, and isn't a bomb-throwing activist:

During his time at the New York Daily News, Meek reported on the prison facility at Guantanamo Bay, detainee issues, port security, al Qaeda in Pakistan, as well as radicalism in Yemen. As a senior investigator for the panel, he will be part of a team focused on calling members of the administration to account for weaknesses in the country's counter-terrorism policies and any perceived missteps.

So King is crawling toward respectability -- which is probably, politically, a smart move.

A poll out yesterday purported to show public support for hearings into the Muslim Menace, but as Greg Sargent pointed out, a much bigger majority of Americans support broadening the scope of the hearings to encompass radicals of all kinds. King refuses to expand his investigation beyond American Muslims, because that would send a "false signal" that we're not all completely obsessed with al-Qaida. (Which, I would argue, makes al-Qaida stronger, but what do I know.)

Despite the fact that we've all been taught that McCarthyism is bad, it still plays pretty well to the public. Especially the Fox News-watching public, who are among the few Americans who actually know that these hearings are happening. More happy news from the poll: Evangelical Christians who watch Fox are terrified that American Muslims want to take over and institute Sharia law:

Jones noted a "significant Fox News effect," pointing to his data that 23% of respondents identified Fox News as their "most trusted" source of broadcast news. "Among those folks," said Jones, "they're much more likely to have heard about hearings, think they're a good idea, and they are about two times as likely to affirm the statement" about shari'ah law (35%, as opposed to 22% of the entire sample).

Considering that vast swaths of the population already believe complete nonsense about an American religious minority, stoking those fears with congressional hearings into the overblown "threat" seems like asking for trouble. And that is in part why King is gradually dialing down the rhetoric and hiring competent professionals: He doesn't want to be blamed, he said recently, the next time someone throws a brick at a mosque.

If the constant fear-mongering about the existential threat of Islam itself by King and his ilk drives someone to throw that brick (or worse), he deserves to be blamed. The fact that he apparently knows the dangers involved in stoking religious hatred just proves how shameless he's been for years.