Can celebrities get busted for bragging about pot smoking? 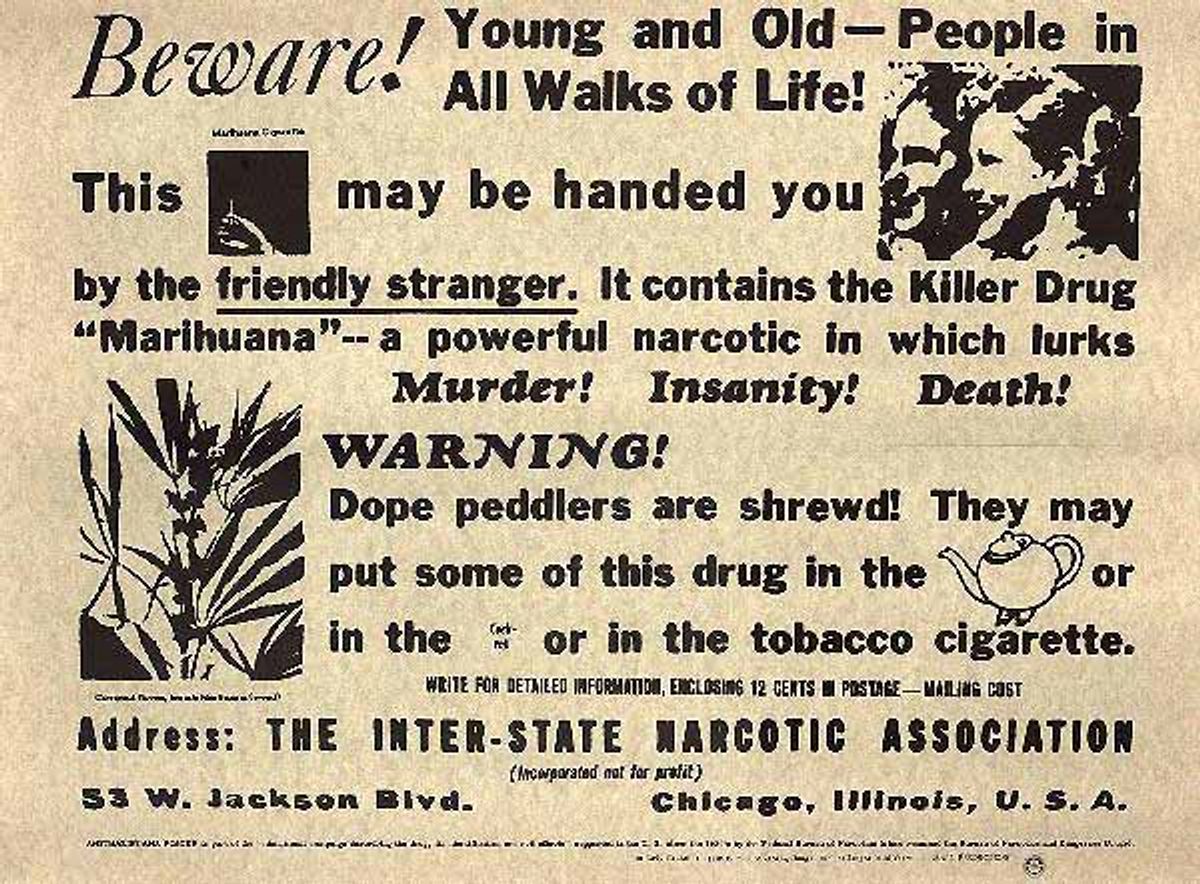 An advertisement distributed by the Federal Bureau of Narcotics in 1935
--

Lady Gaga appeared on "60 Minutes" a few days ago and talked for a minute about smoking pot while writing music. As the debate around Proposition 19 in California ramped up last year, we heard a lot more celebrities talk about their marijuana habits, and many donated large sums to the legalization campaign. So we wondered, could they get in trouble for talking so openly about breaking the law?

To find some answers we called up Charles Nesson, the William F. Weld Professor of Law at Harvard Law School, for some thoughts on the state of drug policy. After studying at Harvard College and Harvard Law School in the '60s, Nesson has become an expert in civil liberties and defended Daniel Ellsberg in the Pentagon Papers case. Now, he's interested in advancing justice in Jamaica, the evolution of the Internet, as well as national drug policy. While he doesn't know much about Lady Gaga, Nesson is optimistic about a more open dialogue around the notion of liberty in America.

There seems to be a trend as Hollywood figures like Seth Rogen and Zach Galifianakis are publicly bragging about smoking pot. What are the implications of this shift in dialogue?

I’m struck by what’s happening with respect to the country legalizing marijuana. [Celebrities bragging] is progress in one sense, but it’s also a testimony to how repressive the actual environment continues to be. I know Andrew Sullivan's book recently called for people who enjoy marijuana to step forward in some way that allows a voice to be representative of the other side of all of the nonsense about marijuana prosecution. It seems in some way related to the spirit of liberty that appears to be afoot in the world in Tunisia, Egypt and elsewhere. It’s like, "All right, we have freedoms, if we’re going to keep our liberties we need to stand up for them."

Tea Party members have opposed the Patriot Act and are crying out for civil liberties. How do you think that's played into the dialogue?

I have no idea, actually. I can't say I follow it beyond the feeling that the Tea Party at its base has got some connection to the idea of liberty, and not necessarily in tune with every form of the connection. But I surely respect that part of it.

One Tea Party stance argues that more liberty could help the economy. How do you think economics factor into the drug policy conversation?

I’m sure it factors hugely -- and not merely the economics. Economics broadly considered, domestic and national security policy, all play into this, very much in accord. Look at Jamaica. The island of Jamaica is stifled under marijuana criminality.

How do you think it would affect Jamaica if marijuana were legalized? Or, for that matter, in the U.S.?

I don’t believe in the either/or. It’s much more in the process of how did it come to happen. Is it something that was arrived at because we learned to govern ourselves a little better or be more moderate and scientific? Or is it something that gets pushed down to be celebrated? I feel like as a child of the '60s I watched the revolution go overboard; we’re hoping that the revolution in Egypt stays in balance. That is, freedom with moderation rather than freedom of licentiousness that sparks a too-far-right-wing reaction.

Let’s go back to celebrities. Willie Nelson was arrested last year for marijuana. Do you imagine there would be any consequences to others publicly announcing their marijuana habits?

I don’t actually think so, unless it somehow had some rhetorical appeal to someone who wanted to take the balance out of order. But the actual engagement of the power of the state with the will of the people is one which has its limits to cautions, including the material students study and, of course, our American juries. The Touray-Cornell case in Montana, where the authorities found they couldn't successfully even convene a jury. Ultimately the law rests with the people.

I think celebrities are seen as instruments of teaching by those who would like to give instruction that it's illegal to smoke marijuana. They’re characters in a play, and our institution plays it out.

You were involved the defense of a High Times publisher and a NORML founder after their arrest in Boston in 2008 -- not long after marijuana was decriminalized there. Was that a watershed moment?

Well, it should be. Massachusetts had passed a referendum; the public had made its position quite clear; and it was really open for the law to follow along and technically allow that to happen. I think it had something to do with telling the people it could have been better, had the government persuaded the Supreme Court of Massachusetts that this was a pure request.

The issue had been challenged legally in Massachusetts twice before, once back in 1969 and then once in 1980. Our challenge was that marijuana has now been demonstrated not to be a harmful substance, and there's no basis for criminalizing it; we were prepared to face that on all sorts of fronts. But the court refuses to hear any evidence, or answer any questions of the rationality -- or anything really. They just follow the letter of the law without allowing it to be challenged. But still, Massachusetts is further along than many.

What needs to happen now for the legalization movement to move forward?

I think people need to understand the marijuana control as a method of police control. And it functions for that purpose.

As far as I’m concerned it could come from a stunningly worldwide movement that we create. The harder they come -- that was the core lesson in the movie.