Obama to meet with Mark Zuckerberg, Steve Jobs and other tech CEOs 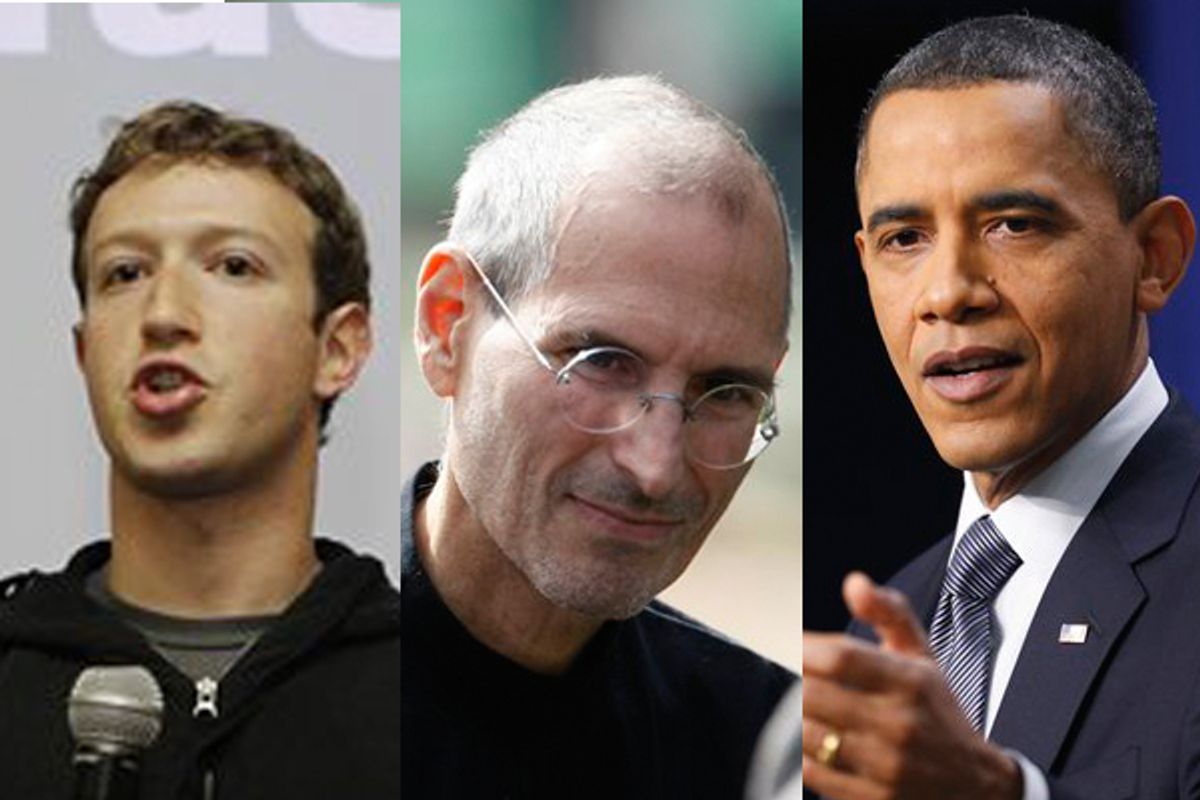 President Barack Obama is heading to friendly territory to push his plan to spend billions more on education, meeting with Facebook's founder and other technology leaders in the San Francisco Bay area and touring Intel Corp.'s semiconductor manufacturing facility in Oregon.

Obama wants to spend more on education despite his call for a five-year freeze on other government spending. He says an educated work force will attract jobs and help the U.S. compete with the rest of the world. The budget proposal he unveiled this week seeks $13 billion more for education.

His visits Thursday and Friday to politically friendly areas on the West Coast are partly designed to spotlight his focus on education and prod Republicans to support the higher spending.

With the trip, Obama is also trying to burnish his image as a leader who is listening to the ideas of innovators and who, while faced with a tough budget environment, isn't afraid to push for spending increases in areas such as education and clean energy that he thinks will create lasting, forward-looking jobs.

Obama was meeting business leaders in technology and innovation, including Facebook creator Mark Zuckerberg, at a private home in the San Francisco Bay area Thursday. The social networking site has more than 500 million users worldwide and has turned its 26-year-old founder into a youthful billionaire.

The White House said the meeting is another in the series of periodic discussions the president has been having with business leaders to explore ways they can collaborate to expand the economy and create jobs. The meeting is closed to media coverage.

"These are representatives of businesses . who know a lot about private sector job growth," said White House spokesman Jay Carney.

Obama is touring Intel Corp.'s semiconductor manufacturing facility in Hillsboro, Ore., on Friday with CEO Paul Otellini. Intel has an education program that includes a curriculum, a competition and online resources to encourage studies in science, technology, engineering and math.

Otellini was among 20 corporate CEOs who met privately with Obama last December in Washington. He has criticized the administration, saying Obama's policies have caused too much uncertainty for businesses and have not led to job growth or increased consumer confidence.

Since that meeting, Obama has stressed the role of innovation as a key element of the job-creation agenda he is pursuing as he looks ahead to his re-election campaign next year.

At Intel, Obama will hear about the chip maker's efforts to spur innovation and prepare workers for jobs in high-tech industries. He'll also speak about the role of education in preparing workers for those jobs.

Obama has left Washington once a week since his Jan. 25 State of the Union to highlight his plan to expand the economy and create jobs by spending on education, innovation and infrastructure.

Education is this week's theme. Obama discussed his education plans at a Baltimore middle school on Monday. Before departing the White House on Thursday, he was discussing a rewrite of the primary federal education law, No Child Left Behind, with a bipartisan group of House and Senate members.

Some of the increased spending would fund competitive grant programs to encourage improvements in early learning programs and by school districts. Money would also go toward improving teacher quality and preparing thousands of new math and science teachers for the classroom.