Rape, Murder and SWAG: What you need to know about Jimmy Fallon's musical guests, Odd Future 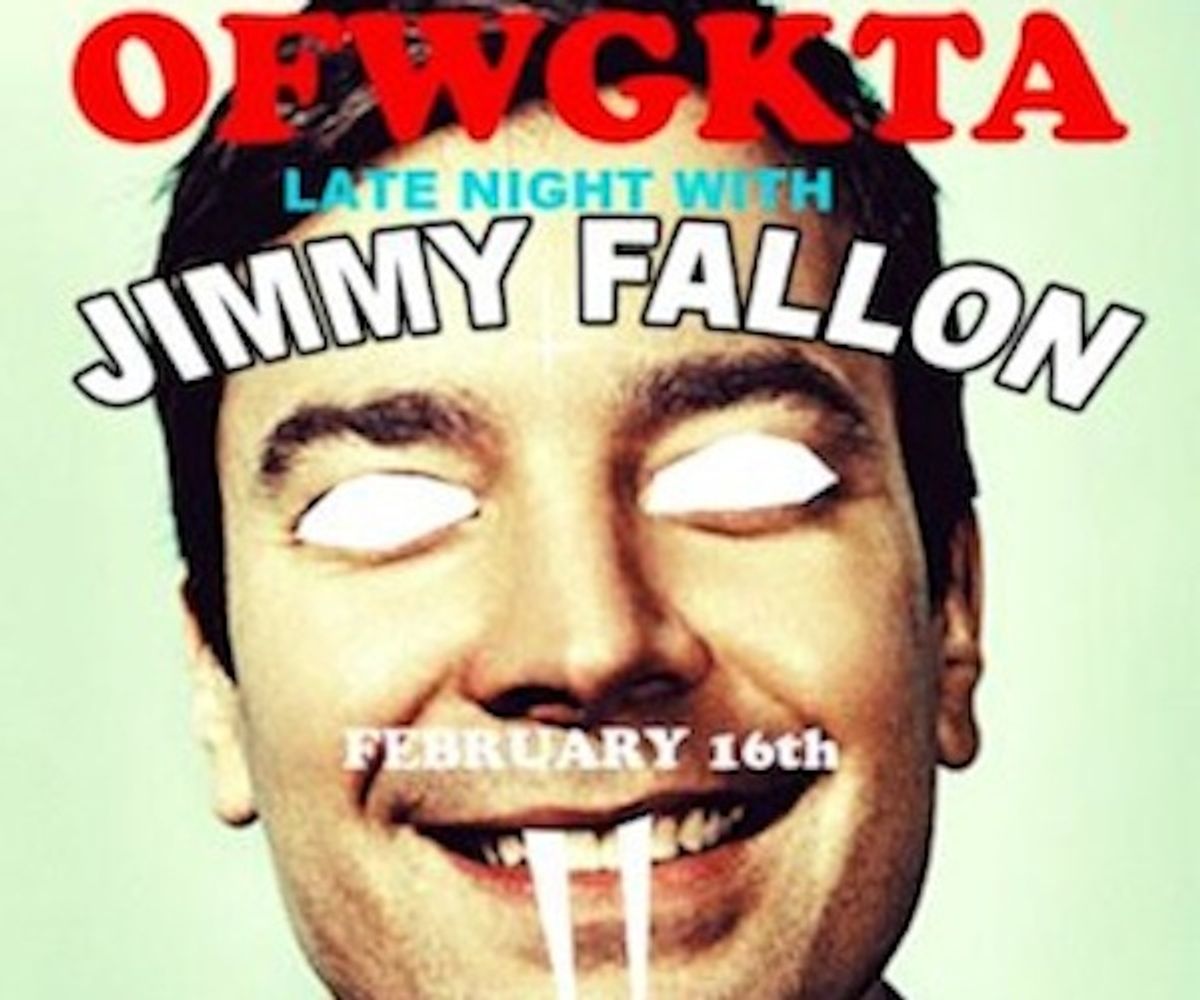 Pop quiz time! Was Tyler the Creator's appearance on last night's "Late Night with Jimmy Fallon" a testament to:

a) Jimmy Fallon's complete ethical and moral failure as a television host by giving voice to a charismatic group leader whose mantra is "KILL PEOPLE, BURN SHIT, FUCK YOU"

d) All of the above

The answer? We're still trying to figure it out.

But let's back up a bit. For those of you who have no idea what Odd Future or OFWGKTA is, here's a quick summary. Odd Future Wolf Gang Kill Them All (usually abbreviated to either its acronym or first two words in the press) is a California hip-hop collective headed up by 19-year-old Tyler the Creator. Though they've been around since 2008 with the release of their "Odd Future Tape," they've remained firmly entrenched in the underground scene, in part because of the group's anti-conformity ethos, but mostly because until recently, no music critic valuing their job wanted to sing the praises of songs that included lyrics like "I'm opening a church to sell coke and Led Zeppelin/To fuck Mary in her ass" and "We go skate, rape sluts, and eat donuts from Randy's."

Oh, and then there is Tyler's insane Twitter feed:

To the misfortune of mothers everywhere, the Internet does not pay most of its music writers enough to care about what an editor or advertiser will think, and mixtapes of Odd Future began receiving incredible hype through profiles and raves in music blogs  and, eventually, Pitchfork, which named Tyler's solo project "Basterd" one of the top 50 albums of 2010 and his single "French" as one the top 100 tracks of the same year. This type of indie cred was almost certainly one of the factors in getting Tyler signed to major label XL (which handles M.I.A., Radiohead and Vampire Weekend, among others) and in response, Tyler and Odd Future told Pitchfork it was "fucking stupid." The group hasn't had many kind words to say about bloggers, music writers or labels at their shows, either.

As to be expected, music journalists working at publications became a bit reticent when it became apparent that these kids were both incredibly violent in their lyrics and becoming big enough to invoke the sacred trinity of Eminem, Jay-Z and Wu-Tang in almost every article written about them. Many (including "Rolling Stone, The Village Voice and Fader) eventually acquiesced after one night of the high-octane performances like the one below.

Zach Baron of The Village Voice summed up the problem with publicly praising Odd Future and Tyler in a recent review that is as inspired as it is ambivalent:

Twenty or thirty people who I really respect adore Odd Future and so do I. How do we square how evil their stuff can be with the mainstream exposure we are all even now organizing to provide them?

There are two rationales at work here. The first is that, like Eminem, who once slapped a dude in ICP and another time hit a bouncer but has never otherwise been accused of an actual serious crime -- though god knows he's rapped about committing plenty of them -- they don't really mean it. The second is that artists need to be able to say absolutely anything in order to properly function.

... But this doesn't quite explain why we want to listen to people talk about rape and murder, either. In fact, the very use of the word "want" there probably makes some people -- me included -- uncomfortable.

And if we're talking Village Voice-levels of discomfort, just how the hell did Tyler and his merry band of psychos end up jumping on top of "Fallon" last night? For that answer, I turned to Foster Kamer, Online Features and News Editor for Esquire.

Foster: Their songs are fucking crazy. It is rap made by the most hormonal, belligerent, damaged but also talented and charismatic rap posse in a while. I can't imagine how they actually performed on Fallon.

Me: They sing about rape and pimps and murder? Maybe it will be like "Forget You" at the Grammys.

Foster: Hm. Pimps? Not so much. But yes, rape and murder. Those are recurring themes. But so are, like, the long-term Freudian effects and damage of abandonment by fathers. The overreaching theme of pretty much every song is: Fuck everyone else but us, because they're assholes. And then: Fuck us, because we're assholes.

Me: How did they build up a following? Was it mostly mix tapes and online buzz?

Foster: Yeah, and critical obsession. But that buzz needs more than a bunch of critics spit-balling about these crazy brilliant fucked up kids, it needs fans. It needs that viral element, and they have it. Let me tell you what a viral element is: A new single that they closed with last night (at New York's Santos Party House) where the chorus is: "KILL PEOPLE, BURN SHIT, FUCK SCHOOL. I'M FUCKING RADICAL MOTHAFUCKA I'M FUCKING RADICAL." SWAG.

Foster: SWAG is kind of like the Odd Future version of the Force. Except for kids who think a catchy hook is "KILL PEOPLE, BURN SHIT, FUCK YOU." Everything is swag. One can be "swagged the fuck out." But that can be a great situation, or a terrible situation. Why? [A: "Fuck you is why. Swag."] But Swag typically refers to something great. It's also its own cheer, as in "SWAG, SWAG, SWAG."

Me: So SWAG is energy that is neutral but can be harnessed for good or evil. Sort of like "Jersey Shore's" use of the phrase "Situation." OK. So how did they end up on "Fallon?"

Foster: Questlove probably had a hand in it. Mos Def, who was at last night's show, and who was at their first New York show a few months ago, was on Fallon tonight just "hanging out." So Mos Def probably told Questlove about them, and if anyone had incredible taste in music proportionate to their power to expose people to it in America right now, that person is Questlove.

Me: So is his appearance on "Fallon" going to be seen as selling out, you think? For someone who says KILL PEOPLE BURN SHIT to appear on a mainstream late-night talk show?

Me: Well then I guess the revolution will be televised. And bleeped out according.

Foster: Or they just worked their way around it.

And "work around it" they did, if you include jumping on a famous television host mid-song while Mos Def screams SWAG! into a camera in your definition of a work around.

On the other hand, Odd Future managed to barely get bleeped the entire night, which might be a first for these guys. Does that mean they are selling out? Becoming watered down? Losing cred? None of those possible criticisms seemed to touch Tyler the Creator, who ended the night by tweeting about the performance.

For better or for worse, Tyler the Creator has crossed over into the mainstream consciousness. Now we just have to learn to live with ourselves for liking his music.