What we still don't know about Lasik

As the surgery continues to plague patients like me, the man who approved it for the FDA pushes for a recall 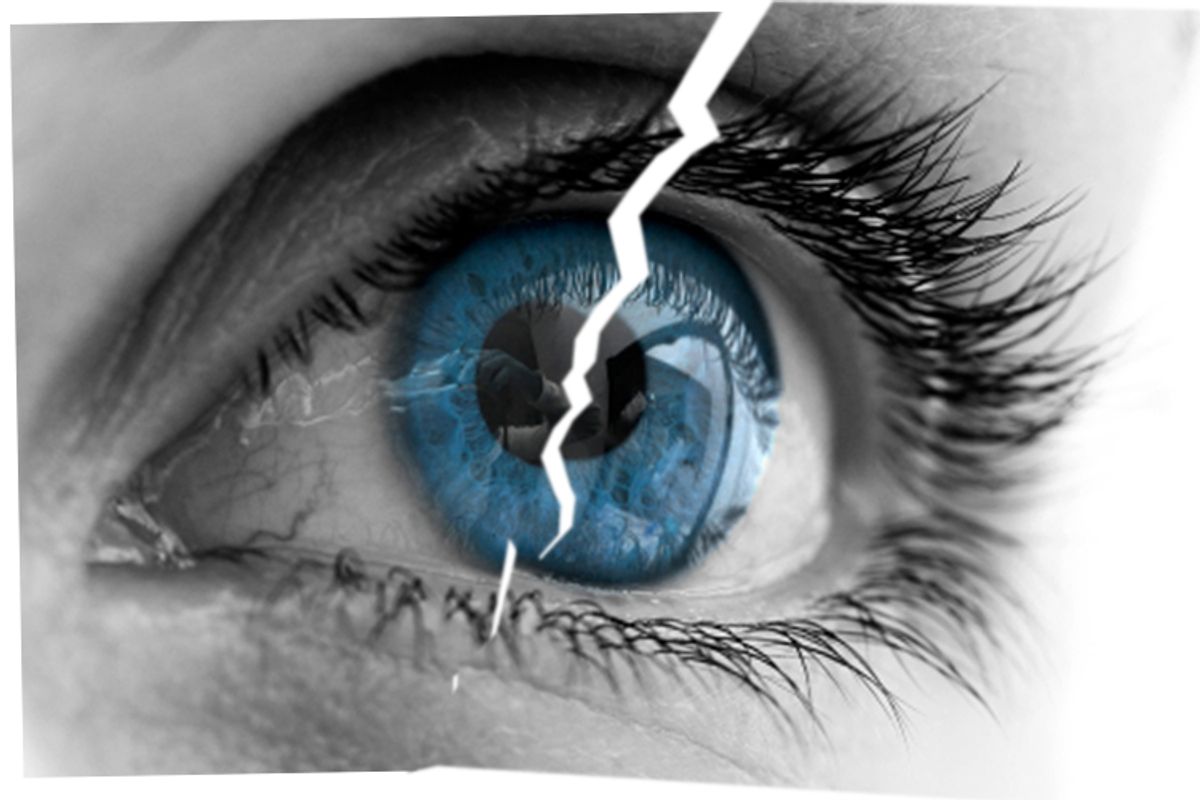 How are your eyes?

That's all anyone ever wants to know these days: How my eyes are doing after my collision with Lasik almost three years ago. Are they still dry? Do they still hurt when exposed to sunlight? Is my vision still blurred? And what about glasses -- am I still wearing them?

The answer: Yes, yes, yes and yes. Emphatically, resoundingly, blindingly yes. My eyes sting. They burn. I look at neon signs and the colors bleed into a fluorescent Rorschach test. I have difficulty deciphering black lettering on white boards; I have personally helped elevate the stock of Allergan, which manufactures Refresh Plus, the drops that allegedly help dry eye.

Clearly, this is all very annoying, but at this point, I'm used to it. It's just one of the things I live with, like PMS and hangnails. And in the grand scheme of things, it's not so bad. According to Market Scope, LLC, an ophthalmic industry research firm, nearly 15 million procedures have been performed in the U.S. over the last decade, with a 95.4 percent patient satisfaction rate. Lasik is also a $1.6 billion industry -- which, as Michael Lewis points out in "The Big Short," was initially created to replace the revenue stream lost to declining cataract surgery reimbursement rates.

Ninety-five percent satisfaction is not awful (although of course it depends on what your definition of "is" is). It's the other 5 percent that worries me. I've interviewed people who've had corneal transplants because of botched Lasik, who've lost their jobs because they can't see -- like Los Angeles Dodger Jay Gibbons, who reportedly stopped playing winter ball in Venezuela because of blurred vision he acquired after Lasik surgery earlier in the season, the L.A. Times reported.

So all in all, I'm pretty lucky. But I think it's fair to say that I'm angry. Not just about my situation, but because this is an industry where it's almost impossible to find a reputable refractive surgeon to speak out on behalf of patients. If you've got a problem, it's your fault. I went to a dry eye specialist in New York City, a guy who wrote a book on the subject. He acknowledged that Lasik causes dry eye and that it's a major surgical side effect.

"Would you ever say that on the record?" I asked.

He shook his head somewhat sheepishly. "We do Lasik here," he explained. Aha! Talk about a smart businessman. He's got the problem and the solution under one roof.

Attorneys also have trouble finding doctors to testify for patients. On June 2, 2009, Todd Krouner, a lawyer in Chappaqua, N.Y., who has won millions of dollars for injured Lasik patients, cross-examined a Dr. Wing Chu in a case involving a patient with post-Lasik ectasia, a bulging of the cornea. Dr. Chu is medical director of the Eye-Bank for Sight Restoration, and an associate clinical professor of ophthalmology at Columbia University, among other appointments. He was hired by the defense to conduct an independent medical examination of the patient. Here's how that conversation went:

The hero here is a man named Morris Waxler, whom I wrote about last year for Salon. Waxler is a Ph.D. and a former branch chief of the FDA's Center for Devices and Radiological Health from 1995 to 1999. He was, in effect, the man responsible for approving Lasik vision enhancement lasers in 1997. Since that time, he has become rabidly anti-Lasik, publicly admitting that the FDA "screwed up" when it approved it.

Now he's taken his activism a step further. Last month, he filed a petition calling for the FDA to withdraw approval "for all Lasik devices and issue a Public Health Advisory with a voluntary recall of Lasik devices in an effort to stop the epidemic of permanent eye injury caused by lasers and microkeratomes used for Lasik eye surgery."

In his petition, Waxler maintains that the initial approval was based on data that was "dominated by Lasik surgeons working hand-in-glove with Lasik manufacturers. Data recently brought to light exposes this partnership for what it was: a classic example of the fox guarding the henhouse, wherein the primary arbiters of safety and effectiveness of Lasik devices were the device manufacturers and its collaborators." Consequently, he says, the FDA was deprived of knowledge of the full extent of Lasik injuries prior to and during FDA reviews of documents submitted in support of the safety and effectiveness of Lasik devices.

He adds that -- contrary to the FDA's own device-approval standard, which limits adverse events to 1 percent -- published scientific data shows that Lasik devices induce an average adverse event rate of about 22 percent "that persists beyond six months to five or more years."

This is potent stuff. And it doesn't seem to be the rantings of a bored retiree. "The idea that I had such a hand in getting a product on the market that was messing people's eyes up is disgusting," he says. "My wife said, 'Why are you getting back into that mess? Leave it to other people.' But I couldn't leave it alone. The more I discovered about it, the worse it got. Rereading the applications to the FDA that I once read and reviewed and reviewing the published literature since then -- it's not a pretty picture."

It's not a pretty picture, but it seems to be pervasive among the FDA. According to a recent report in the Archives of Internal Medicine, of the 113 devices that the FDA recalled between 2005 and 2009 for posing serious health risks or even death, more than 70 percent had been approved because they were considered similar to other products on the market. "Our findings reveal critical flaws in the current FDA device review system and its implementation that will require either congressional action or major changes in regulatory policy," the authors wrote.

While Waxler stops a centimeter short of using the C word (that would be, "conspiracy"), he does wonder why doctors failed to report adverse, or negative, reactions after five or six months. "They didn't report the data," he says. "They said patients wouldn't come back because as far as they could tell patients were doing very well. It's like asking Iran how many nuclear sites they have and them saying, 'We don't have any.' And saying, 'OK, that's fine. We trust you.'"

The refractive surgery community, not surprisingly, is less than pleased with Waxler. The American Society of Cataract and Refractive Surgery stated that while they laud his commitment to Lasik safety (which they share), they "disagree with his science and conclusions."

"The vast preponderance of clinical evidence shows that Lasik is safe and effective -- a conclusion that the FDA has repeatedly re-affirmed in its multiple reviews of up-to-date information," they wrote. "By failing to follow standard scientific protocol, Dr. Waxler does a disservice to all LASIK patients -- including those few who have had serious problems and who deserve to have them clearly understood."

After talking with Waxler, I called, and e-mailed, and called, and e-mailed again, the FDA to no response. Finally, Karen Riley, an FDA spokesperson, shot me an e-mail: "FDA continues to monitor the safety and effectiveness of all devices, including the lasers approved for Lasik," she wrote. "In October of last year we provided a brief update on our role in a three-part study of Lasik that is still in the beginning phases. It is a project that we hope will yield additional insights about this procedure."

It was a nice pat response, but had nothing to do with Waxler's petition. That response came from David S. Buckles, Ph.D., the ombudsman for the CDRH, and was forwarded to me by a Lasik activist:

"I personally appreciate the effort by Dr. Waxler and colleagues to use this approach to raise these issues with the Commissioner's Office because this is an appropriate venue within which to propose changes to the means by which Lasik devices are regulated," Buckles wrote. "While we in CDRH do not have close contact with proceedings in the Commissioner's Office on this particular matter, my understanding is that the petition is under review at the Commissioner's level to determine whether to accept the petition for consideration. If the petition is accepted for consideration, and subsequently members of CDRH are tasked to participate in the review, then we will have some visibility into the process. However, until that happens, the status of the petition is not within our cognizance."

In other words: Let's wait and see. And wait some more.

Realistically, of course, it's unlikely that Lasik will be banned. Plenty of people have had tremendously wonderful experiences. Even Todd Krouner, the lawyer, says that he "knows and respects too many honest, intelligent, competent Lasik surgeons, who 'eat their own cooking' and have had Lasik themselves," he says. "Still, I believe that the public deserves an honest study, free from the bias and influence of the Lasik industry. There are bright doctors and trustworthy public health officials who have no financial interest in Lasik, who are certainly qualified to perform a credible study. Without that, I doubt that the public will be able to assess the true risks, benefits and alternatives to Lasik surgery. If doctors cannot agree among themselves about the true incidence of ectasia, or much more common dry eye syndrome, how is a patient ever supposed to make a truly informed decision?"

How indeed? It's a good question, and one I'd like to explore further. But not right now. My eyes hurt.