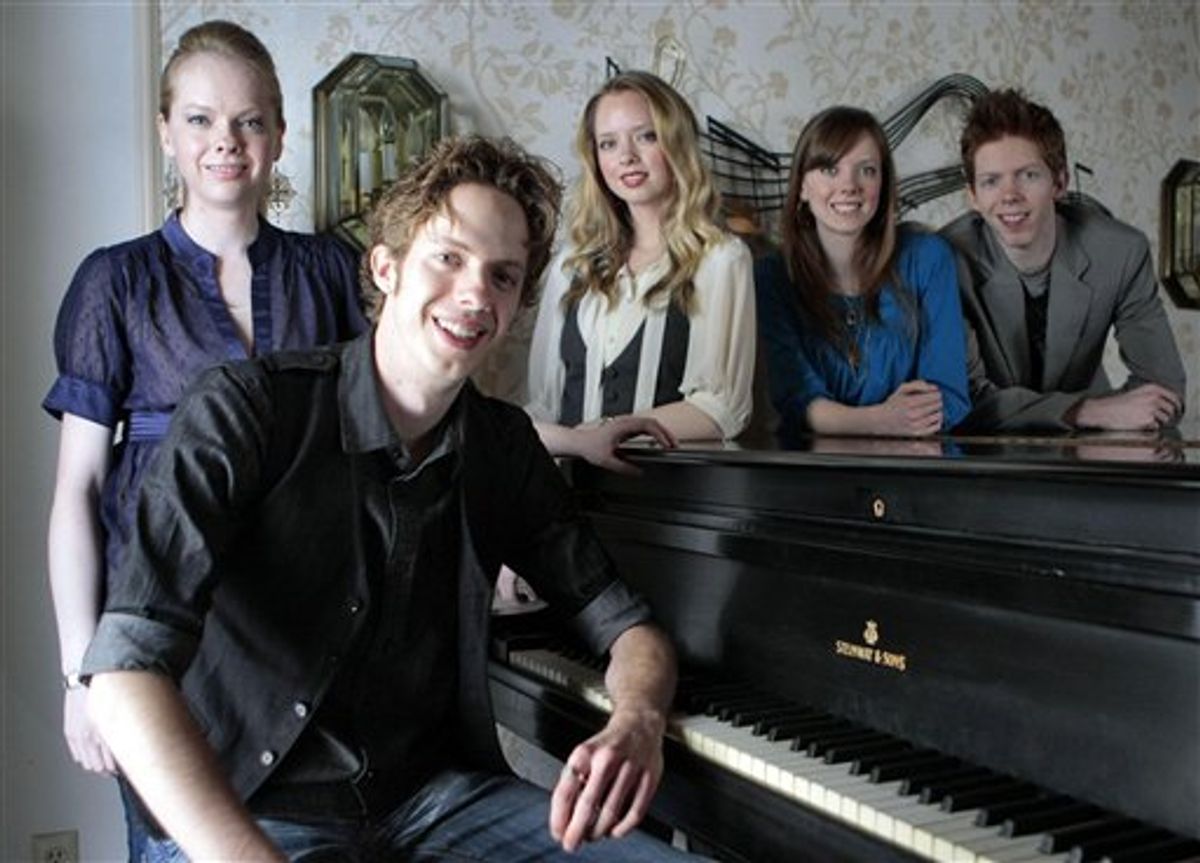 FILE - This Feb. 6, 2008 photo shows, The 5 Browns, left to right, Deondra, Gregory, Derirae, Melody and Ryan in Alpine, Utah. The parents of the 5 Browns, Keith and Lisa Brown, were seriously injured when the car they were in plunged 300 feet off of Little Cottonwood Canyon Road into the creek late Monday, Feb. 14, 2011. Keith Brown, father of the members of group The 5 Browns, was charged Feb. 10 with one first-degree felony count of sodomy on a child and two second-degree felony counts of sexual abuse of a child, according to Fourth District Court records obtained Wednesday, Feb. 16, 2011. The records don't identify any victim by name or indicate the relationship between Keith Brown and the alleged victims. Kimball Thomson, a spokesman for The 5 Browns, said the charges involve Brown's daughters and group members Desirae, Deondra and Melody, who are now adults. He declined to release further information on the women. A court hearing had been scheduled for Brown, 55, on Thursday, but it was postponed after the car crash. (AP Photo/Deseret News, Jason Olson) (AP)
--

The distraught father of The 5 Browns musical group pleaded guilty Thursday to sexually abusing his daughters when they were children in a deal that will send him to prison for at least 10 years.

With scratches and bruises on his face from a crash in which his Porsche plunged 300 feet into a canyon, Keith Brown, 55, entered his plea to three felony counts in Fourth District Court.

"He is terribly remorseful for what has happened and for what he has put his family through," defense attorney Steven Shapiro said after the hearing. "He recognizes that this is the next step in the long road to trying to accept responsibility for something terrible that he did a long time ago."

Dressed in dark slacks and a grey overcoat, Brown appeared in court with his sister-in-law by his side. He showed few signs of the horrific crash just three days earlier that police called an accident.

His response to the judge when asked for his plea on each charge was a barely audible, "guilty."

Brown's three daughters and two sons are part of the classical piano group The 5 Browns, whose albums have topped the classical music charts and who have appeared on "Oprah" and other shows. The group also has been profiled by "60 Minutes."

Brown did not speak further during the hearing and declined to answer questions from reporters afterward. He remained free until his sentencing on March 31, after prosecutors said they do not consider him a threat.

Brown chose to enter the plea to bring a quick resolution to the case and did not want to "exacerbate the harm" by dragging out the proceedings, Shapiro said.

He could face a sentence of up to life in prison on the first-degree felony and up to 15 years each on the second-degree felonies. Under the plea deal with prosecutors, he will serve at least a decade in prison.

The records filed Feb. 10 in the abuse case don't identify any victim by name or indicate the relationship between Keith Brown and the alleged victims.

However, Kimball Thomson, a spokesman for The 5 Browns, said the charges involve Brown's daughters and group members Desirae, 32, Deondra, 30, and Melody, 26. He declined to release further information on the women.

The AP does not generally identify people who say they were sexually abused, but the Brown women have chosen to be identified and are cooperating with police, Thomson said.

None of the women were in court on Thursday, but after the hearing Thomson said they were satisfied with the plea deal.

Thomson said the Brown children severed their professional relationship with Keith Brown in October of 2008. He was once the manager of The 5 Browns but now has no connection, Thomson said.

There are no statutes of limitation in Utah that prevent prosecutors from filing such sex crime charges.

Shapiro couldn't say exactly when Brown first spoke to police, but said the father first went to his Mormon church leader to confess. Sturgill wouldn't comment further on the remarks.

"I think this deal was good for both sides," Sturgill said. "This is something the victims wanted resolved, and I think the plea bargain is going to satisfy their needs."

Brown and Lisa Brown, 54, the mother of the group members, were hospitalized after the Valentine's Day crash that left the Porsche mangled and unrecognizable in Little Cottonwood Canyon on the east side of the Salt Lake valley.

The Browns were initially knocked unconscious, but Keith Brown woke and was able to call 911 from a cell phone.

The cause of the crash remained under investigation, although Unified Police Lt. Justin Hoyal said speed appeared to be a factor in the accident.