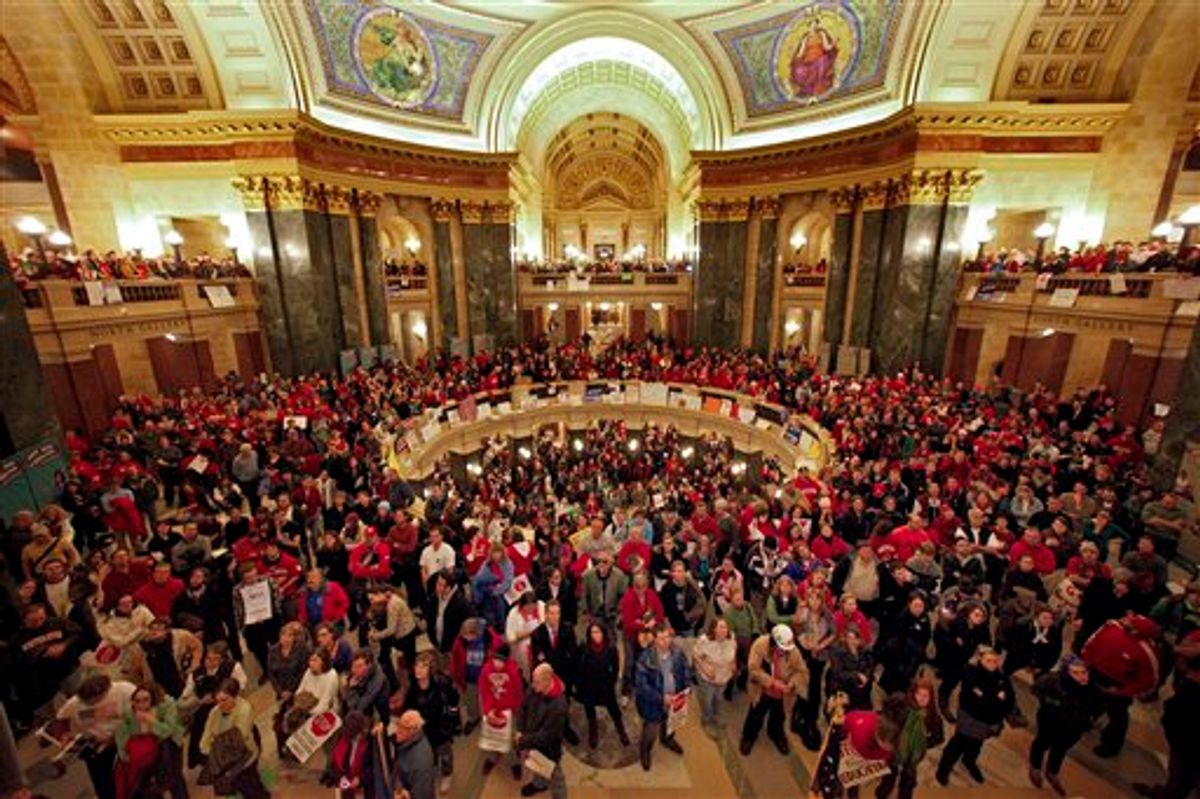 Protesters clogged the hallways of the Wisconsin state Capitol on Thursday as the Senate prepared to pass a momentous bill that would strip government workers, including school teachers, of nearly all collective bargaining rights.

The nation's most aggressive anti-union proposal has been speeding through the Legislature since Republican Gov. Scott Walker introduced it a week ago. After clearing a major legislative hurdle Wednesday night, it was headed to votes in the Senate and Assembly.

Hundreds of protesters massed outside the Senate chamber on the second floor of the Capitol early Thursday, hours before the planned vote. Republican leaders said it has the votes to pass in both the Senate and Assembly.

The bill marks a dramatic shift for Wisconsin, which passed a comprehensive collective bargaining law in 1959 and was the birthplace of the national union representing all non-federal public employees.

Thousands of protesters, including children and teachers from more than two dozen schools forced to close due to high absences, were expected in and outside the Capitol for a third day of protests. Schools in Madison, the state's second largest district with 2,600-union covered employees, closed for a second day.

Hundreds of people, many of them students from the nearby University of Wisconsin campus, slept in the rotunda for a second night leading up to the vote.

They chanted "Kill the bill!" and "Recall Walker!" early on Thursday. But there appeared to be little doubt the bill would pass.

The head of the 98,000-member statewide teachers union called on all Wisconsin residents to come to the Capitol on Thursday for the votes in the Senate and Assembly.

"Our goal is not to close schools, but to instead to remain vigilant in our efforts to be heard," said Wisconsin Education Association Council President Mary Bell.

The Legislature's budget committee passed the bill on a partisan vote just before midnight. Several opponents in the crowd broke into tears as Democrats on the committee encouraged them not to give up the fight.

Democrats have been powerless to stop the bill.

"The story around the world is the rush to democracy," said Sen. Bob Jauch, D-Poplar. "The story in Wisconsin is the end of the democratic process."

In addition to eliminating collective bargaining rights, the legislation also would make public workers pay half the costs of their pensions and at least 12.6 percent of their health care coverage -- increases Walker calls "modest" compared with those in the private sector.

Republican leaders said they expected Wisconsin residents would be pleased with the changes and that the bill was about saving money. The union concessions would save the state $30 million by July 1 and $300 million over the next two years to address a $3.6 billion budget shortfall.

As protesters chanted "Recall Walker now!" outside the governor's office, Walker insisted he had the votes to pass the measure. He says it's needed to help balance the budget and avoid massive layoffs.

"We're at a point of crisis," the governor said. He has said he would call out the National Guard if needed to keep state operations, including prisons, running.

In an interview with Milwaukee television station WTMJ, President Barack Obama said he was monitoring the situation in Madison and acknowledged the need for budget cuts. But, he said, pushing public employees away from the bargaining table "seems like more of an assault on unions."

While other states have proposed bills curtailing labor rights, Wisconsin's measure is the most aggressive anti-union move yet to solve state budget problems. It would end collective bargaining for state, county and local workers, except for police, firefighters and the state patrol.

Wisconsin has long been a bastion for workers' rights. The American Federation of State, County and Municipal Employees was founded in 1936 in Madison.

But when voters elected Walker, an outspoken conservative, along with GOP majorities in both legislative chambers, it set the stage for a dramatic reversal of Wisconsin's labor history.

Under Walker's plan, state employees' share of pension and health care costs would go up by an average of 8 percent.

Unions still could represent workers, but could not seek pay increases above those pegged to the Consumer Price Index unless approved by a public referendum. Unions also could not force employees to pay dues and would have to hold annual votes to stay organized.

In exchange for bearing more costs and losing bargaining leverage, public employees were promised no furloughs or layoffs. Walker has threatened to order layoffs of up to 6,000 state workers if the measure does not pass.

Republican-backed changes to the bill made by the committee Wednesday would extend a grievance procedure to public workers who don't have one and require more oversight and put a deadline on changes Walker's administration can make to the Medicaid program. It would also give a level of legislative oversight to Walker's ability to sell public power plants.