Despite continued protests, the State Department stands firm on its alliance to the government of Bahrain 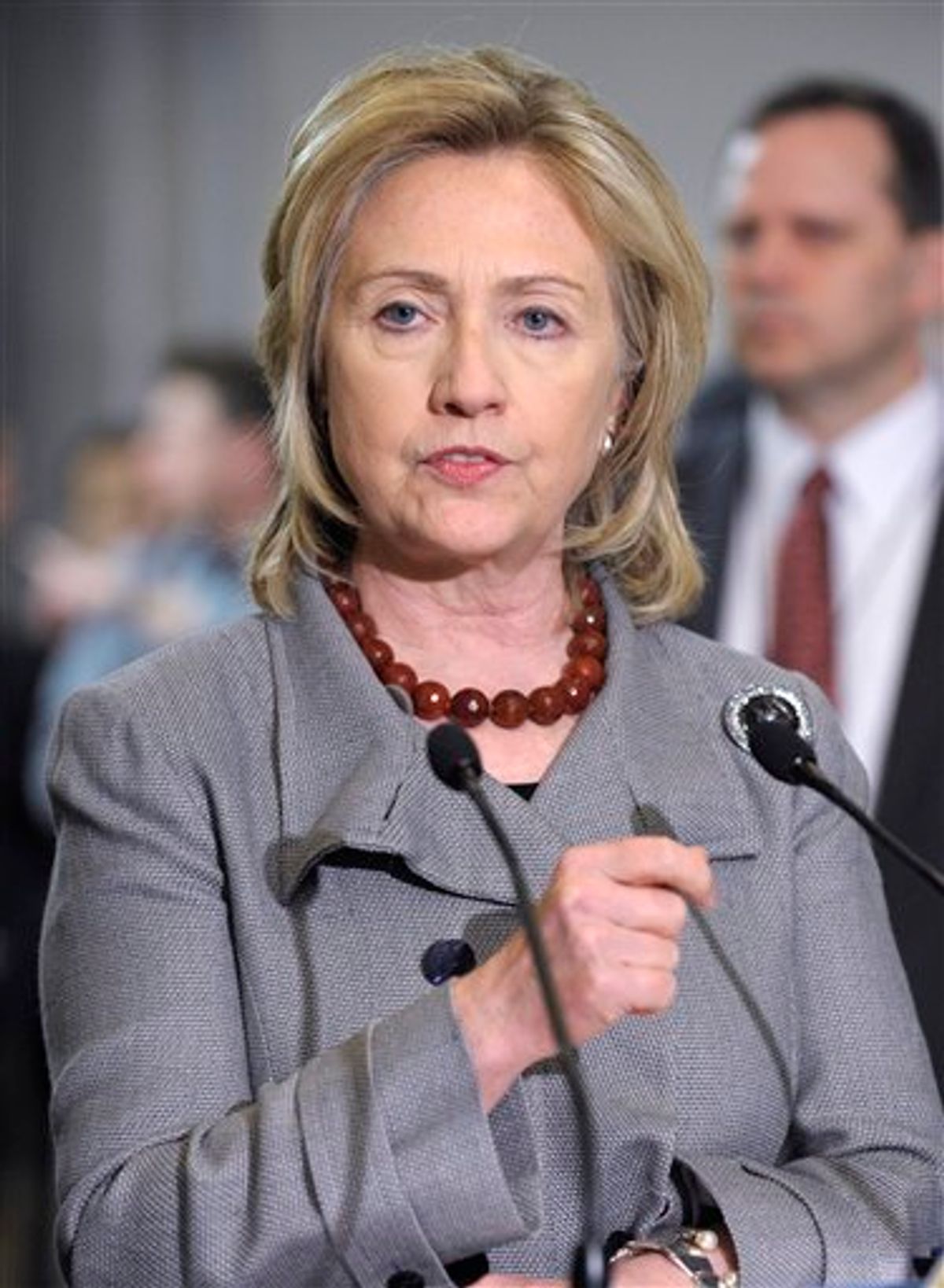 When Secretary of State Hillary Clinton visited the tiny island nation of Bahrain for the first time in December, she made headlines here in the U.S. for one thing: An attendee at one of the events asked whether she'd run for president again. She said no. At that same event, Clinton also got another question that received far less attention. A member of Bahrain's parliament asked whether the country's decline in the areas of human rights, democracy, and civil society should prompt the U.S. to review its alliance with the country:

My question is related to the declines in many areas. When Bahrain was chosen as a strategic ally to United States, we were in the thick in term of many areas, in term of civil society, in term of human rights, in term of democracy. A lot of declines happened in the last period, and you are aware about all these things. Many people are arrested, lawyers and human rights activists. Sometime we feel that there is no, let's say, red lines or constraints between United States and their allies. The situation was perfect, but now it is changed. So my question is: Do you review the policies of your allies from time to time, and how can we see our relation with United States as an opportunity for, let's say, a growth for the democracy?

Clinton's answer? The U.S. is "constantly reviewing" its allies, she said. "Nothing is perfect, nothing is done, there's a lot of work that still lies ahead." She continued:

Clinton repeated such praise throughout her visit, stating that she was impressed by Bahrain's progress "on all fronts -- economically politically, socially" -- and by the commitment that the government has to the democratic path that Bahrain is walking on."

Apparently, Bahrain's people -- a majority Shi'ite population governed by a Sunni royal family -- were less impressed. Two months after Clinton's visit, that same government unleashed an attack on protestors who had been peacefully calling for economic and political reform. Bahrain's foreign minister defended its crackdown on Thursday, calling it "a very important step that had to happen" to prevent the country from falling into "a sectarian abyss." Hundreds were wounded and as many as five protesters were killed on Thursday -- those deaths were "unfortunate," the country's foreign minister said.

The Obama administration responded with criticism of the violence, but said it was not looking to dictate events or outcomes. Secretary Clinton spoke with the foreign minister and "expressed 'deep concern' about actions of security forces against peaceful protesters."

"I stressed the need to seriously engage all sectors of society in a constructive, consultative dialogue to meet the way forward in accordance with the aspirations of the people. And there have been reform steps taken which we want to see continue, we want to see strengthened," she told the press after the call. (Hear her statement.) "Bahrain is a friend and an ally and has been for many years, and while all governments have a responsibility to provide citizens with security and stability, we call on restraint."

Bahrain and the United States have long been close strategic allies. (We described them as "BFFs" in our overview of Middle East crackdowns.) In December, Clinton described the relationship this way:

Our nations cooperate closely across a range of issues. We work together to support entrepreneurs. Our scientists collaborate. Our students, and so many others, have developed close ties between our two people. And the sailors of our ships' fleets have lived and worked alongside you for decades, as part of our close security partnership.

Asked about the Secretary's recent praise for Bahrain, State Department spokesman Mark Toner said on Thursday, "Well, the Secretary was speaking, obviously, several weeks ago and was talking about some efforts that were made by the Bahraini Government towards political reform and to address some of the concerns that we're now seeing expressed on the Pearl roundabout by the Bahraini people. But clearly, this is something that the Bahraini Government needs to address in a greater fashion."

U.S. diplomatic cables show that underneath its glass-half-full view of Bahrain's progress, the State Department has long been aware of the country's internal tensions.

"Conditions in Bahrain continue to simmer. Small but violent bands of Shi'a underclass youth, frustrated with persistent discrimination and what they perceive as too gradual a pace of reform, clash with police nearly every week," noted one cable. "Discrimination against Shia persists," noted another.

Reuters reported Thursday that the UK, another of Bahrain's allies, is formally reviewing its recent export licenses to Bahrain in light of the violence. We asked the State Department if it's considering a similar review and received the following response: "We continue to review our foreign assistance and export licenses, consistent with our legal obligations and foreign policy goals, to ensure that exports advance U.S. objectives and are being used for the right purposes."