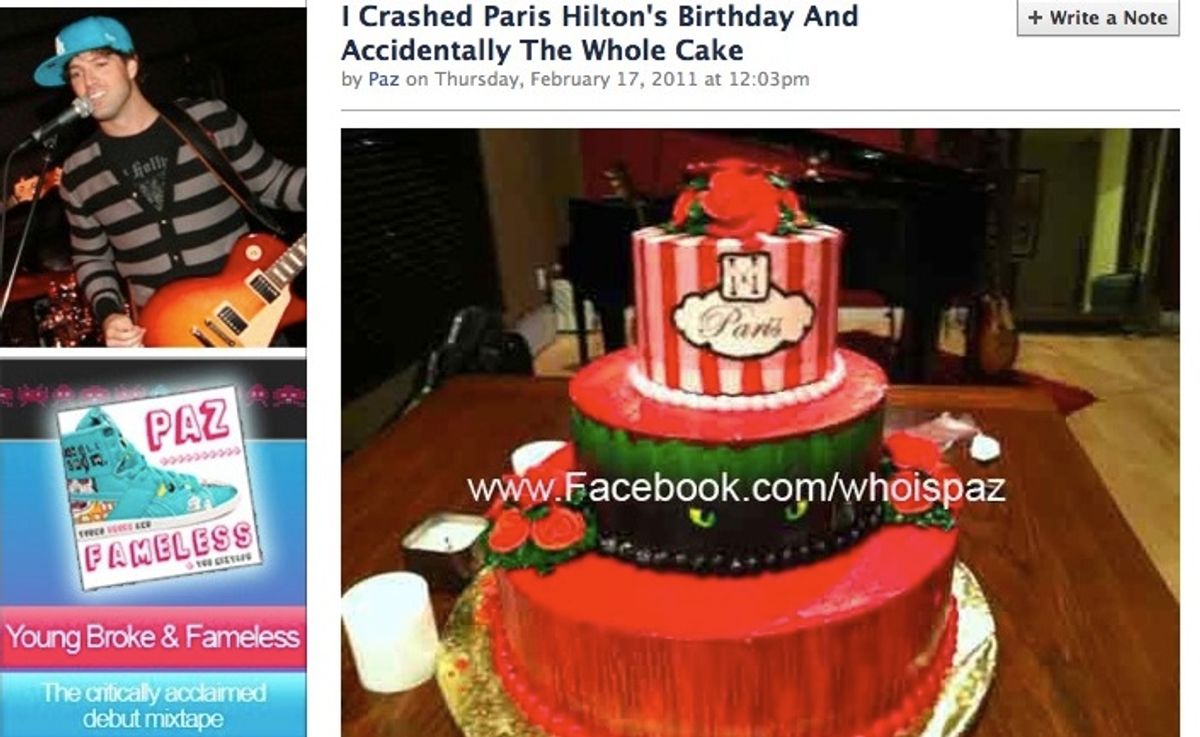 Last night, Paris Hilton lost her birthday cake when an uninvited guest took it right out from under security's nose. Someone alert the paper! Well actually, no one bothered even mentioning the story (it was doubtful the partygoers noticed...Paris had already blown out the candles) until the thief fessed up.

The whole ordeal is posted on "professional party-crasher" Paz's Facebook, where he recounts waking to find himself next to a giant red cake. You have to give the kid some credit, he has balls. Sure, he may write like Tucker Max, but this is 20 times more interesting of a story than Tucker's sexploits. But the gist of Paz's night can be summed up as this: Paz crashes Paris' birthday party, Paz gets ridiculously drunk, Paz decides to "rescue" the cake he estimates at $2,000.

I make for the front door as Kev makes for the valet. I summon some gumption and begin to walk purposefully back into the party.

I brush shoulders with the guy who resembles the head of security.

"Yes, sir," he acknowledges with a slight bow toward the rear of the house.

I take my cue and make a bullet for cake city.

In one fluid motion, I sidestep a confused waiter, seize the prize, and about face to the door.

I pass the security chief again on the way out.

I nod purposefully... he nods in return.

40 seconds later I'm in the front seat of a Nissan Maxima with 70 lbs. of awesome in my lap.

After news of the theft (apparently Paris didn't notice or care enough to make noise about it that night or this morning) President and CEO Jared Gurfein of Viridian Spirits (and the guys behind the cake) sent out an "OFFICIAL STATEMENT REGARDING THE THEFT OF PARIS HILTON BIRTHDAY CAKE VALUED AT $3,200":

“It is very unfortunate that someone stole the cake from Paris’s birthday party. We had the cake designed especially for Paris with Lucid in the batter and a beautiful representation of Lucid's artwork on it, which she had requested to meet the Moulin Rouge theme of the party. We’re happy that Paris and her guests were able to enjoy a night of Lucid cocktails, including the Paris Lemonade / Paris frozen Lucid Sorbet – and only wish that the guests could have tried her delicious cake. As for Paz, feel free to connect with us on the Lucid Absinthe Facebook page, where we would love to hear your side of the story and thoughts on the cake!”

So that was basically an email just to clarify that the cake was more expensive than originally stated. And to pat on the back the guy who stole it! We bet if it had been Lindsay Lohan who had taken the cake, she'd be back in court right now.