The science of heartlessness

Why are some people more -- or less -- sympathetic to others' pain? Recent studies may have some answers 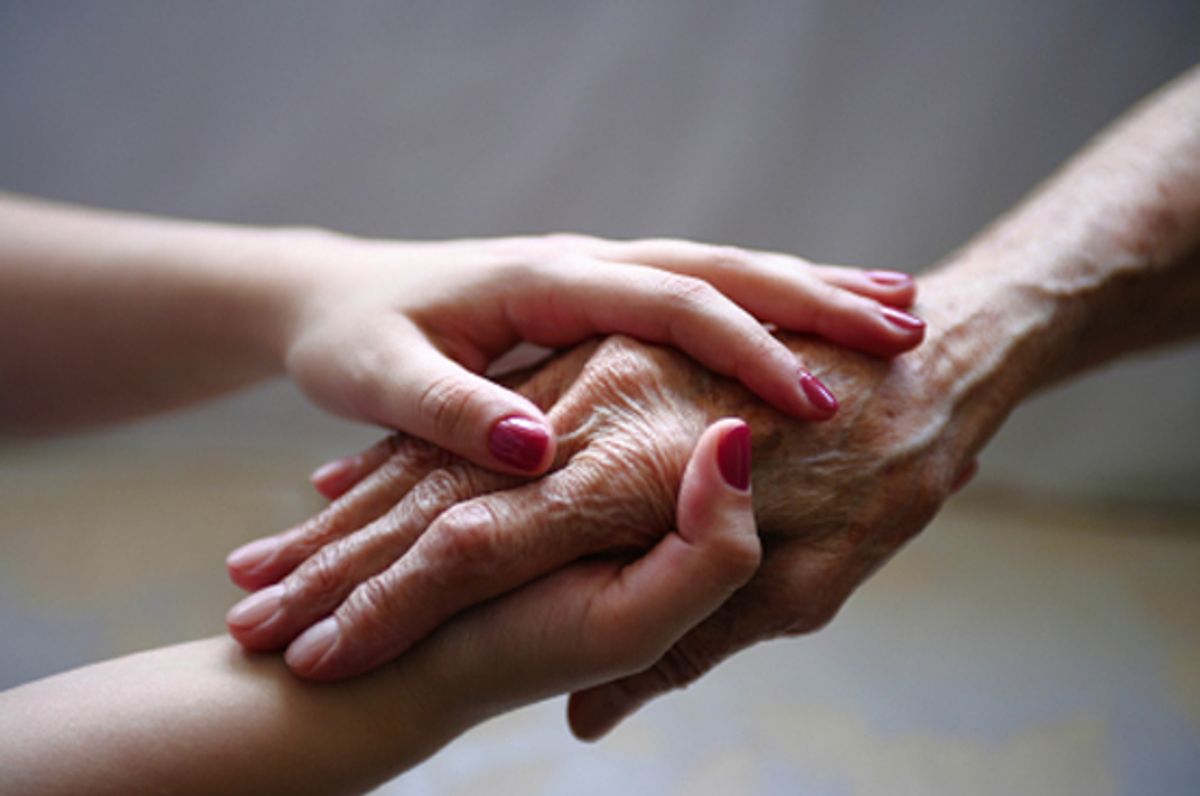 A friend got divorced recently, and also got taken to the cleaner by her lazy ex. One night a gang of us were discussing the whole mess, and this friend, "Patsy," was enumerating reasons her ex should stop hassling her for more money. She had brought most of the furniture into the union, and had now left much of it behind. "I gave him the huge new TV," she said. "And the entertainment center. And my bedroom set. A really nice bedroom set. And the couch."

Our friend Robin began to steam as the list grew.

"I felt so sorry for him," Patsy continued. "I didn't want to leave him with an empty house."

Robin boiled over. "Sorry for him? Where is he? I'm going to get that furniture right now."

Robin snorted. Then she slyly inquired, "Hey, if I'm mean to you, will you give me furniture, too?"

Probably. Patsy recently went to Sears and purchased a long winter coat for an immigrant woman she had seen collecting bottles and cans in her neighborhood. Patsy doesn't tolerate the suffering of others very well. It makes her suffer.

We've all encountered people with such divergent attitudes toward suffering -- and it often brings up a rather prickly question: Why are some of us bleeding hearts while others have hearts of stone? Science actually provides us with a number of clues.

A Dutch team, for example, has looked at how oxytocin, a hormone frequently associated with female reproduction, influences parenting styles. Dutch scientists watched as a bunch of mothers interacted with their two-year-old children, who were trying to solve a difficult puzzle. Some mothers were patient and helpful; others were not. And the not-so-helpful mothers were more likely to carry a particular version of the oxytocin receptor gene: Their "mommy chemical" system may have been set just a tad to the selfish side, slightly blinding them to the emotions of their children.

Now further studies are finding that oxytocin can increase the amount of money people will donate to a charity. One study in particular lent credence to the time honored method charities use to pull money from magazine readers: Feature a woebegone child in your advertisement. In the study, researchers had subjects watch a tearjerker film of a father talking about his son's brain tumor. They sampled subjects' blood before and after the film. Following the film the blood was awash in oxytocin, and their donations to charity rose 47 percent, compared to those of subjects who saw a film of the same father talking about a trip to the zoo. The tearjerker technique was more effective on women than men. Experiments wherein people sniff oxytocin to bolster the chemical in their brain show that the chemical may work in two ways. It may operate first by dampening our natural fear of one another. Oxytocin is very active in the amygdala, which monitors the world for danger. Extra oxytocin fights fear. Then, with that terror out of the way, perhaps it's easier to read another person's emotions and relate to them. People dosed with oxytocin make more direct eye contact, and they are better at describing the emotions portrayed on another's face. So extra oxytocin also helps us to empathize.

But humans have access to another brain system that raises sympathy, too. When you stick out your tongue at a baby, the baby will often stick its tongue out automatically. The motor region of the baby's brain is mirroring your own motor region. Our emotional regions also have a system that helps us to mirror another's feelings. Although many scientists refer to this system as "mirror neurons," referring to brain cells that reproduce other people's emotions in our own brain, that's speculation.

Mirror neurons do exist in monkeys, that's established. When scientists monitored one nerve cell at a time to see how one monkey responded to a second monkey's actions, they found that some neurons fire just as if the watching monkey were performing the action himself. Whether a monkey reaches for food or merely watches another monkey reach for food, his neurons fire identically. Scientists can confirm mirror neurons in monkeys because they're allowed to slip superfine wires into a monkey's brain and tap into one cell at a time. They can't get a permit to do that to humans.

Patsy, the giver of furniture, and I sometimes joke that we have too many mirror neurons. For bleeding hearts like us it's a struggle to keep other people's emotions out of our heads. Your pain is my pain. Everyone's pain is my pain. I've learned to watch only happy movies, and to avert my eyes from advertisements for animal charities. If I didn't throw a blanket over the mirror neurons I'd spend the whole day in tears. When researchers use MRI to hunt for a mirror neuron system in humans, they argue over what they see. Compared to monitoring a single cell with a wire, MRI yields a grainy picture. There is plenty of room for interpretation. Some think a couple of structures in the middle layers of the brain behave in a mirrorlike way. But others see two distinct types of neurons -- one for watching, another for acting.

That we have some kind of mirroring system is common sense. A means of automatically mimicking another animal's behavior would speed the learning process. And certainly it would help to explain how one animal can feel empathy for another. It would also explain how effortlessly, subconsciously, we empathize with a sad face or a happy face. Your mirror system would reproduce inside you the emotions you saw in someone else. Right now we can say that oxytocin seems to make a human more sensitive to others' emotions, but we can't say how.

That Dutch study of how mothers helped their children, however, is central to the evolution of sympathy. On its face, it seems so cold and sad that some mothers can't take their child's point of view. It seems so unmaternal that they scold instead of praising, that they dominate instead of guiding. Human mothers, we're often told, are selfless creatures dedicated entirely to the health and welfare of their offspring. They're not snakes who give birth and glide away. These selfish women must have no empathy, sympathy, or decency!

But that ignores the fact that a mother -- every mother, whether snake, skunk, or sheep -- has biological aspirations above and beyond an infant. In her DNA she dreams of launching not one, but a dozen offspring down the river of time. And to do that she has to watch out for her own health and welfare.

All mothers and their infants engage in a battle over this issue, from the moment of conception. It is in the offspring's best interest to drag every nutrient and calorie it can absorb out of its mother's body. It is in the mother's best interest to hold something back so that she can raise future offspring. This battle continues after birth. An infant denied the opportunity to nurse does not quit without a fight. She'll let loose wails that in earlier times could attract deadly predators.

But no matter how sympathetic a mother might be, the infant won't gain the upper hand in this contest. Starvation remains a real threat to humans today, and the photographs that come out of refugee camps testify to the importance of motherly selfishness. Still strong enough to walk, mothers embrace their dying children. I'm sure they wish they could nurse their children, but evolution has outfitted them with bodies that will not permit it. When a female's body fat drops below a certain point, she can continue to empathize with her child's pain, but her body refuses to sympathize: Her body stops producing milk. And how could it be otherwise? Why would evolution reward a body that would give its last calorie to an offspring, then die and leave the offspring to starve alone? The offspring of such sympathetic mothers don't survive, and neither do the genes that would make a person so disastrously generous.

But neither could evolution produce mothers who would abandon an infant at the first sign of hardship. Evolution rewards those mothers who invest in their existing offspring but guard their ability to have more children in the future.

And the dynamic would not be much different for men. Human infants are so useless that they require twenty-four-hour protection for a number of years after birth. Many hands make light work, and they also make for more surviving babies. Males who are inspired to pitch in with child care increase the odds that their own genetic legacy will grow healthy and strong.

The contrast between Patsy and Robin highlights the fact that humans come in many shades of cooperativeness. Why would that be? Why does evolution perpetuate both the pushovers and the pushers? Well, a personality that's low in sympathy or empathy is not a heartless block of stone. She just isn't so quick to assume the feelings of others. She does a better job of maintaining her boundaries and keeping a steady eye on her own future. Undistracted by life's melodramas, she's more likely to focus on facts and figures.

Nor is the bleeding heart (ahem) a boundaryless ball of mush. Well, maybe she is. Maybe it's a real challenge for her to say no, because she can feel the impact of that hard word on another's psyche. Maybe she's sucked into drama after drama because she cannot walk away from a soul in distress. But because she is what we think of as "a good friend" she also has a large circle of humans that ensure she has a healthy balance of laughter and martinis in her life.

Hannah Holmes is the author of "The Well-Dressed Ape," "Suburban Safari," and "The Secret Life of Dust." This article is an excerpt from her new book, "Quirk: Brain Science Makes Sense of Your Peculiar Personality."