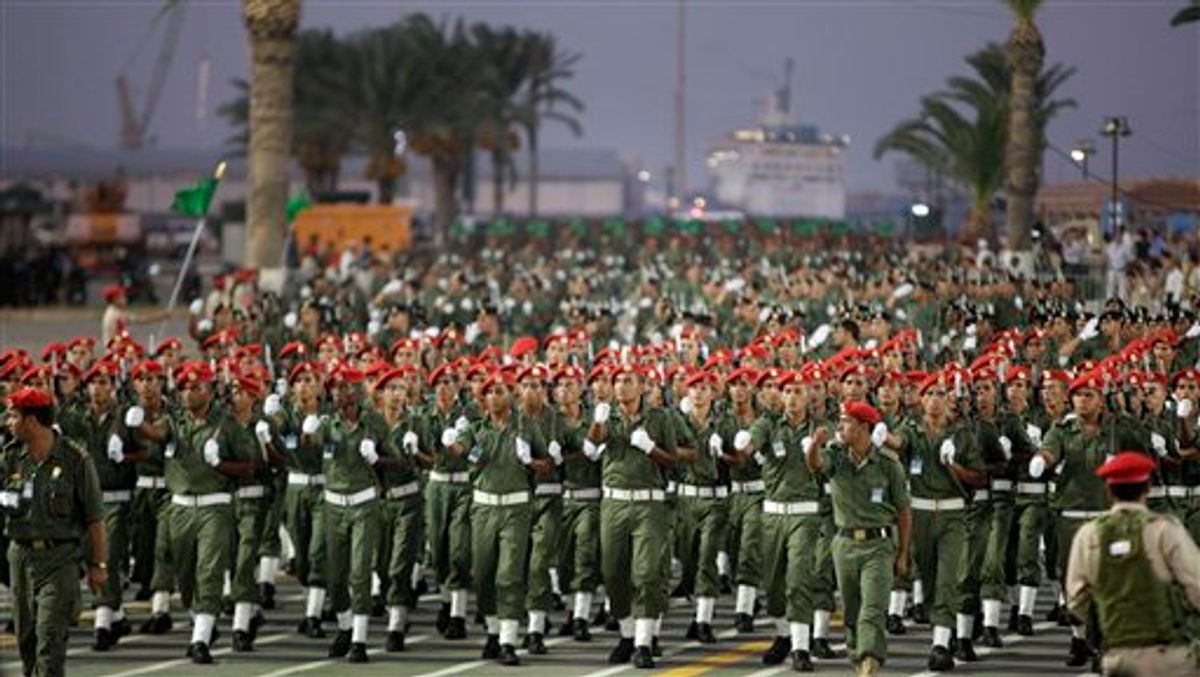 Moammar Gadhafi's forces fired on mourners leaving a funeral for protesters Saturday in the eastern city of Benghazi, killing at least 15 people and wounding scores more as the regime tried to squelch calls for an end to the ruler's 42-year grip on power.

Libyan protesters were back on the street for the fifth straight day, but Gadhafi has taken a hard line toward the dissent that has ripped through the Middle East and swept him up with it. Government forces also wiped out a protest encampment and clamped down on Internet service throughout Libya

Snipers fired on thousands of people gathered in Benghazi, a focal point of the unrest, to mourn 35 protesters who were shot on Friday, a hospital official said.

A hospital official said 15 people were killed, including one man who was apparently hit in the head with an anti-aircraft missile. The weapons apparently were used to intimidate the population.

"Many of the dead and the injured are relatives of doctors here," he told The Associated Press in a telephone interview. "They are crying and I keep telling them to please stand up and help us."

The official said many people were shot in the head and chest. The hospital was overwhelmed and people were streaming to the facility to donate blood.

Like most Libyans who have talked to The Associated Press during the revolt, the hospital official spoke on condition of anonymity for fear of reprisal.

Before Saturday's violence, Human Rights Watch had estimated at least 84 people have been killed.

Just after 2 a.m. local time in Libya, the U.S.-based Arbor Networks security company detected a total cessation of online traffic in the North African country. Protesters confirmed they could not get online.

Information is tightly controlled in Libya, where journalists cannot work freely, and activists this week have posted videos on the Internet that have been an important source of images of the revolt. Other information about the protests has come from opposition activists in exile. Egyptian officials briefly tried to cut Internet service during the uprising that toppled Hosni Mubarak on Feb. 11, but that move was unsuccessful.

Libya is more isolated, however, and the Internet is one of the few links to the outside world. The Cairo-based Arabic Network for Human Rights Information released a report back in 2004 that said nearly 1 million people among Libya's population of about 6 million had Internet access at the time. That was just three years after Internet service had been extended to the public.

About 5 a.m. Saturday, special forces attacked hundreds of protesters, including lawyers and judges, camped out in front of the courthouse in Benghazi, Libya's second-largest city.

"They fired tear gas on protesters in tents and cleared the areas after many fled carrying the dead and the injured," one protester said over the phone.

Doctors in Benghazi said Friday that 35 bodies had been brought to the hospital following attacks by security forces backed by militias, on top of more than a dozen killed the day before. Standing in front of Jalaa Hospital morgue, a witness said that the bodies bore wounds from being shot "directly at the head and the chests."

Residents of the city set up neighborhood patrols on Saturday, after police left the streets.

"We don't see a single policeman in the streets, not even traffic police," a lawyer in Benghazi said. People regarded the disappearance of the police as an ominous sign, fearing that pro-government forces would soon follow up the encampment raid with house-to-house attacks.

Switzerland-based Libyan activist Fathi al-Warfali said that several other activists had been detained including Abdel-Hafez Gougha, a well-known organizer who was being held after security forces stormed his house in a night raid.

Gadhafi is facing the biggest popular uprising of his autocratic reign, with much of the action in the country's impoverished east.

The nation has huge oil reserves but poverty is a significant problem. U.S. diplomats have said in newly leaked memos that Gadhafi's regime seems to neglect the east intentionally, letting unemployment and poverty rise to weaken opponents there.

The British Foreign Office on Saturday warned against all but essential travel to five cities in eastern Libya where demonstrations have been concentrated, including Benghazi.

A female protester in Tripoli, the capital city to the west, said it was much harder to demonstrate there. Police were out in force and Gadhafi was greeted rapturously when he drove through town in a motorcade on Thursday. "People are under siege and those who dare to show up are arrested," she said.

Earlier in the week, forces from the military's elite Khamis Brigade moved into Benghazi, Beyida and several other cities, residents said. They were accompanied by militias that seemed to include foreign mercenaries, they added. Several witnesses reported French-speaking fighters, believed to be Tunisians or sub-Saharan Africans, among militiamen wearing blue uniforms and yellow helmets.

The Khamis Brigade is led by Gadhafi's youngest son Khamis Gadhafi, and U.S. diplomats in leaked memos have called it "the most well-trained and well-equipped force in the Libyan military." The witnesses' reports that it had been deployed could not be independently confirmed.