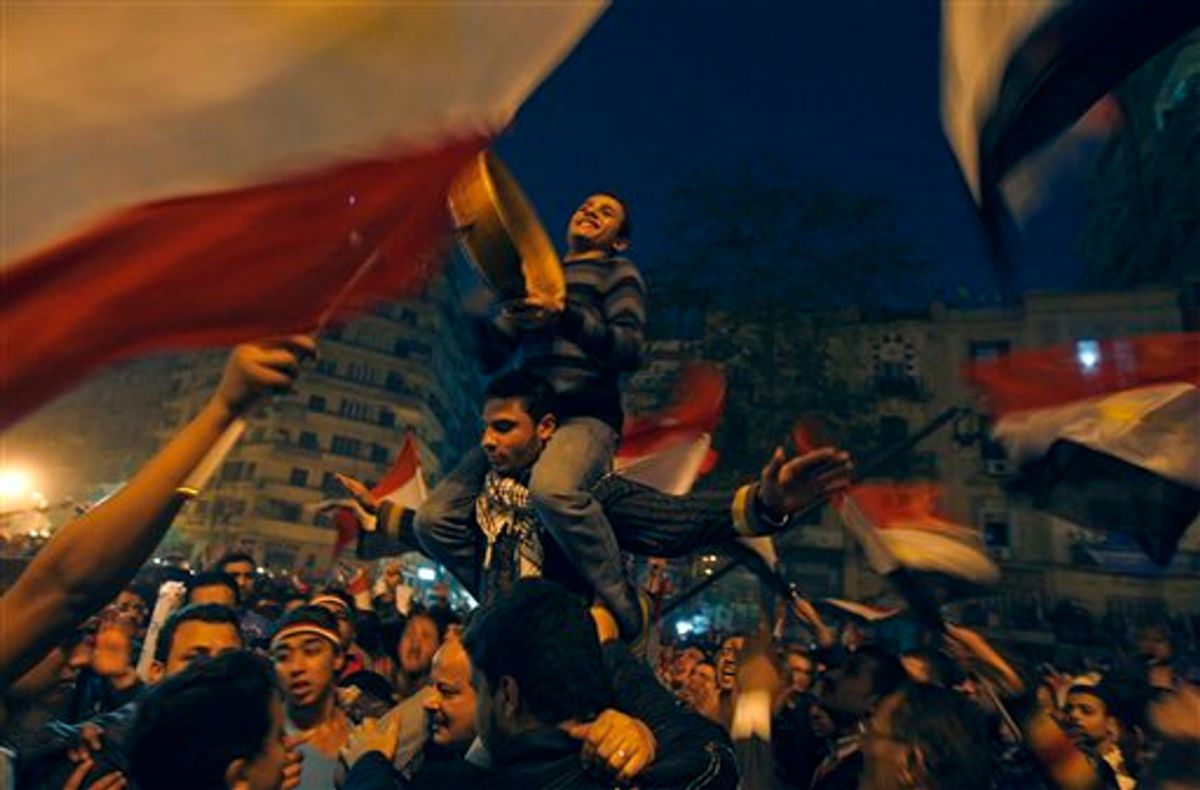 Demonstrators celebrate in Tahrir Square in Cairo, Egypt, Friday Feb. 18, 2011. Tens of thousands of flag-waving Egyptians packed into Tahrir Square for a day of prayer and celebration Friday to mark the fall Hosni Mubarak a week ago and to maintain pressure on the new military rulers to steer the country toward democratic reforms.(AP Photo/Khalil Hamra) (AP)
--

It seems naive to hope the fallout from cataclysmic events in the Middle East and North Africa can spill beyond the region and stir distant, repressed populations with no cultural or historical affinity. Yet successful uprisings in Egypt and Tunisia have captivated dissidents and activists around the world who have campaigned in vain for radical change, in some cases for decades.

This week, South Korean activists even hoisted helium balloons into the air and watched them drift into North Korea with a message attached: discard your leaders, just as the Egyptians did.

"The Egyptian people rose up in a revolution to topple a 30-year dictatorship," said one of the leaflets coasting over the Demilitarized Zone separating the two Koreas. "The North Koreans too must revolt against a 60-year-old dictatorship."

The strain of poverty and inefficient government in North Korea, which has been targeted by international sanctions, matches or exceeds that of Arab autocracies currently buffeted by street protests. Its human rights record, along with those of Myanmar and Zimbabwe, is routinely condemned in international forums.

But there are no clear signs that these countries will face the same kind of upheaval sweeping Bahrain, Yemen, Libya and elsewhere.

"Everything depends on local conditions," said Charles Ries, a senior fellow at the U.S.-based RAND Corp. who recently oversaw economic issues while stationed at the American Embassy in Baghdad.

North Korea, after all, has a cult-like leadership rooted in its World War II-era separation from the south; Myanmar brutally stamped out revolts in 1988 and 2007; and Zimbabwe has a shaky coalition government and plans elections later this year.

Dissidents and authoritarian governments on other continents are undoubtedly reviewing the playbook of their counterparts in the Middle East -- social media networking for the protesters, and hasty reform pledges and thugs in civilian clothes for the leaders. Unrest even spread to Djibouti, a city-state across the Gulf of Aden from Yemen, where protesters reportedly clashed with security forces on Friday.

Fear of bloody retaliation, sharp curbs on information, tactical decisions to avoid a showdown and the lack of a trigger -- severe food shortages or a fuel price hike, for example -- are deterrents to popular revolt in repressive systems.

Protesters in Egypt and the region used Twitter, Facebook and YouTube to organize, and benefited from pan-Arab media outlets such as Al-Jazeera television that spread word of the uprisings.

But there is no sign of an organized opposition in North Korea, where most people do not have access to outside TV and radio, or the Internet. The leadership had long-standing ties to ousted Egyptian President Hosni Mubarak. On Jan. 23, two days before protests broke out in Egypt, ruler Kim Jong Il, who rarely meets foreigners, hosted the head of Cairo-based Orascom Telecom, which built a 3G telephone service network in North Korea.

Dissidents in military-ruled Myanmar, also known as Burma, want to know more about what happened in Egypt despite a state media blackout.

"Everyone is trying to find out information and is interested," said Mark Farmaner of the Burma Campaign UK, which is based in London. Dissidents are "talking about whether they can learn anything from this, and what examples there are," he said.

However, Farmaner said there no signs that anti-government groups want to try a revolt similar to the 18-day uprising in Egypt, where a military council took power and promised to oversee a democratic transition. The military sided with protesters in pushing out Mubarak.

In Myanmar, "the army has always been prepared to shoot when it's ordered to," Farmaner said. "There's no separation of president and military in any way."

Burmese opposition leader Aung San Suu Kyi has called for dialogue with Myanmar's leaders, reflecting concern that a popular upheaval that could end in bloodshed.

"We are interested in the parallels in Egypt and the parallels with Burma but the institutions are not exactly the same. I think protests are one way of bringing about change but not necessarily the best way," she told the BBC in early February, before Mubarak was ousted.

There are plenty of precedents for politically potent ideas taking flight across continents. Ries, the former U.S. diplomat, said European thinkers provided some intellectual backbone for the American Revolution, which did the same for the French Revolution, which in turn inspired Haitian slaves in their revolt against French colonizers, all in the space of a few decades in the late 18th century.

"You look at other places where there are huge numbers of people who have little to lose by banding together and applying these new techniques," Ries said of today's uprisings. "It also exposes, in a sense, the impotence of repression against huge numbers."

Some Arab countries, however, have not yielded to protests, responding instead with deadly force. Prof. Hurst Hannum, an international law expert at Central European University in Budapest, Hungary, cautioned against predictions of a worldwide "outbreak of 'democracy.'"

In an e-mail, he recalled the "rather premature" thesis of Francis Fukuyama, a U.S. academic whose 1992 book, "The End of History and the Last Man," declared that Western-style democracy would prevail over other systems in the wake of communism's fall.

On Feb. 3, state-run radio in Zimbabwe accused Prime Minister Morgan Tsvangirai, a former opposition leader, of trying to spark anti-government uprisings similar to those in Tunisia and Egypt. Tsvangirai said before he joined the governing coalition that he would not lead his followers into danger and that he stood for peaceful change.

State radio is controlled by loyalists of President Robert Mugabe, who has been in power for three decades.

Political scientist John Makumbe wrote an essay titled "Is Egypt possible in Zimbabwe?" in which he speculated that the military would crack down on any revolt, but he drew inspiration from the uprisings to the north.

"Thank you, Tunisia and Egypt, for making us realize what is possible with people power," he wrote on the website of Nehanda Radio, an independent station.

The North Korean system, which survived a famine in the 1990s, has long defied predictions of collapse. Kim Jong Il, who inherited power from his father, has tightened his grip with perks for the military and a propaganda machine that seeks to rouse national pride by demonizing declared enemies.

North Korean state media have not reported events in Egypt, and it is doubtful that the leaflets of the South Korean activists, who also send short-wave radio broadcasts to the north, will reach or convince many people. But they draw a clear dynastic parallel -- some images show Mubarak and his son, Gamal, once thought to be his successor, and Kim Jong Il and his third son and heir, Kim Jong Un.

Paik Hak-soon, an analyst at the Sejong Institute research center near Seoul, speculated that top government and trade leaders in North Korea were "definitely aware" of what is happening in Egypt. But a similar uprising is unlikely, he said.

"There are so many differences in terms of ideology, in terms of power structure, in terms of domestic and external relationships," Paik said. "North Korea is basically an isolated, socialist regime, protected by a most reliable and most supportive big power, China."

China itself portrayed the protests as the kind of chaos that comes with Western-style democracy, underscoring how wary it is of any potential source of unrest that might threaten its power. As Mubarak's hold slipped, Chinese censors blocked the ability to search the term "Egypt" on microblogging sites, and user comments that drew parallels to China were deleted from Internet forums.

In Myanmar, many people with access to satellite dishes followed the historic events in Egypt, quietly wishing for the same thing.

"Tears welled in my eyes when I watched the Egyptians, overjoyed after Mubarak left. I want to tell them that your fight has paid off but we don't know where our future lies," said a 53-year-old private tutor in Yangon, Myanmar's biggest city. The tutor spoke on condition of anonymity for fear of retribution from the authorities.