From "Glee" to Goop to Justin Bieber on "CSI," here is everything we're conflicted about in pop culture right now 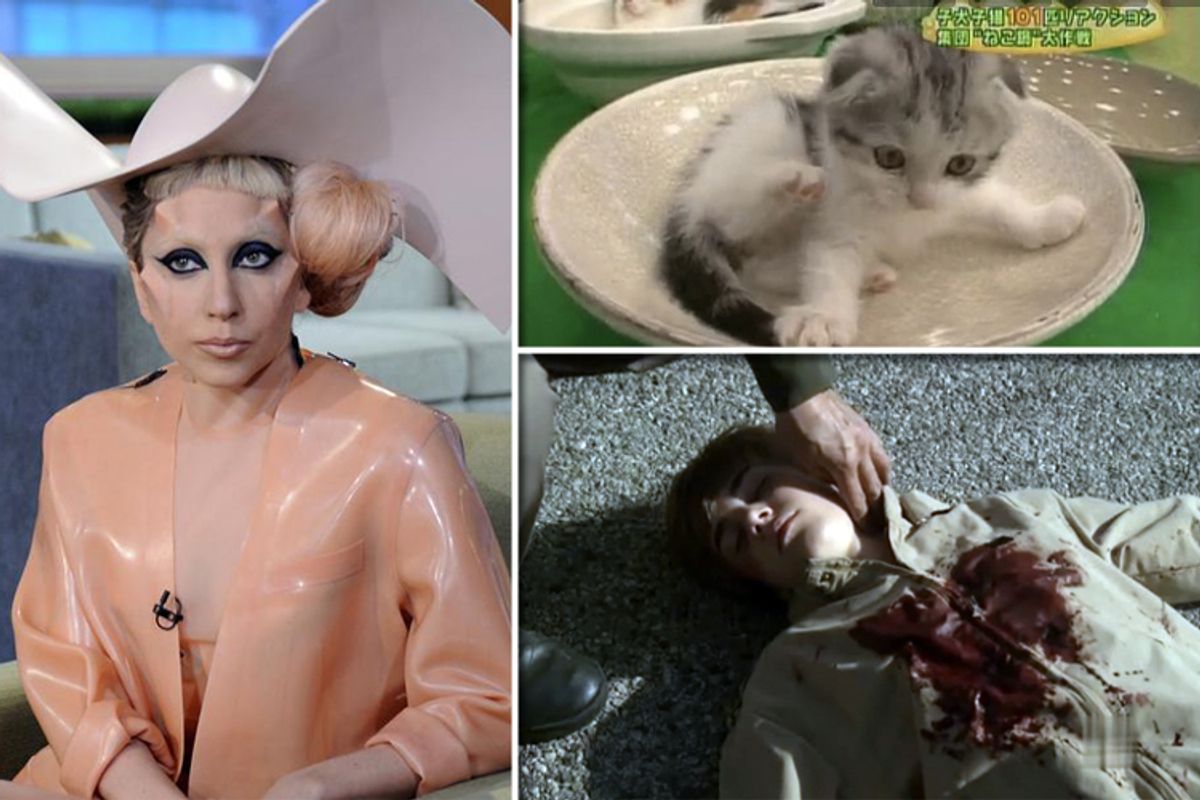 It's been a long post-Grammys week! Justin Bieber was everywhere, talking about abortions, but then not really talking about abortions? Luckily, it's almost time for the Oscars, so soon we'll have new stuff to complain about, like "Toy Story 3" not winning best motion picture. In the meantime, here are 10 artifacts from this week that made us feel a little bit weird inside.

1. James Franco finally getting on Twitter: But we already feel like we know what James Franco is doing with every minute of every day! Oh god, what if he gets a VYou.com account and just starts lifecasting?

2. Justin Bieber getting shot on "CSI": What a perfect way to end a week filled with way too much Bieber-fever.

These cats are adorable. But Japan is weird. Some things are so cute they become suspicious.

Well she's not laughing, but she's not crying, so we're just going to call this "Natalie Neutral."

5. SuicideGirls Casting for New SG/VH1 Reality Burlesque Show: Well, on the one hand, we're all for women empowerment through the power of dance. On the other, this is going to be on the same channel as "Celebrity Rehab," isn't it?

6. Gwyneth Paltrow's latest issue of GOOP with $82 kid pajamas: They're cute. But they're $82. Which kind of sums up everything wrong with Gwyneth's misguided sense of "helping" other mothers with her little newsletter full of tips.

7. "Glee's" Justin Bieber-themed episode: We know the joke here is obvious, but if you're going to include Jane Lynch singing in only a couple of episodes this year, and it happens to be the Bieber episode, why would you have her singing a My Chemical Romance song?

8. The illustrated poster of Michelle Williams in "Meek's Cutoff": We're looking forward to the film, but they might want to hire a new cartoonist. We thought this was a picture of Evangeline Lilly in the final "Lost" episode.

9. Lady Gaga's condom outfit on "Good Morning America": OK, first an egg, now a condom. Pretty soon, Gaga is just going to be a twinkle in your father's eye.

10. The lack of female comedians at SXSW: Really sucks. But at least the Internet outrage it has sparked has brought attention to the fact that most festivals don't feature enough female comedians, period.