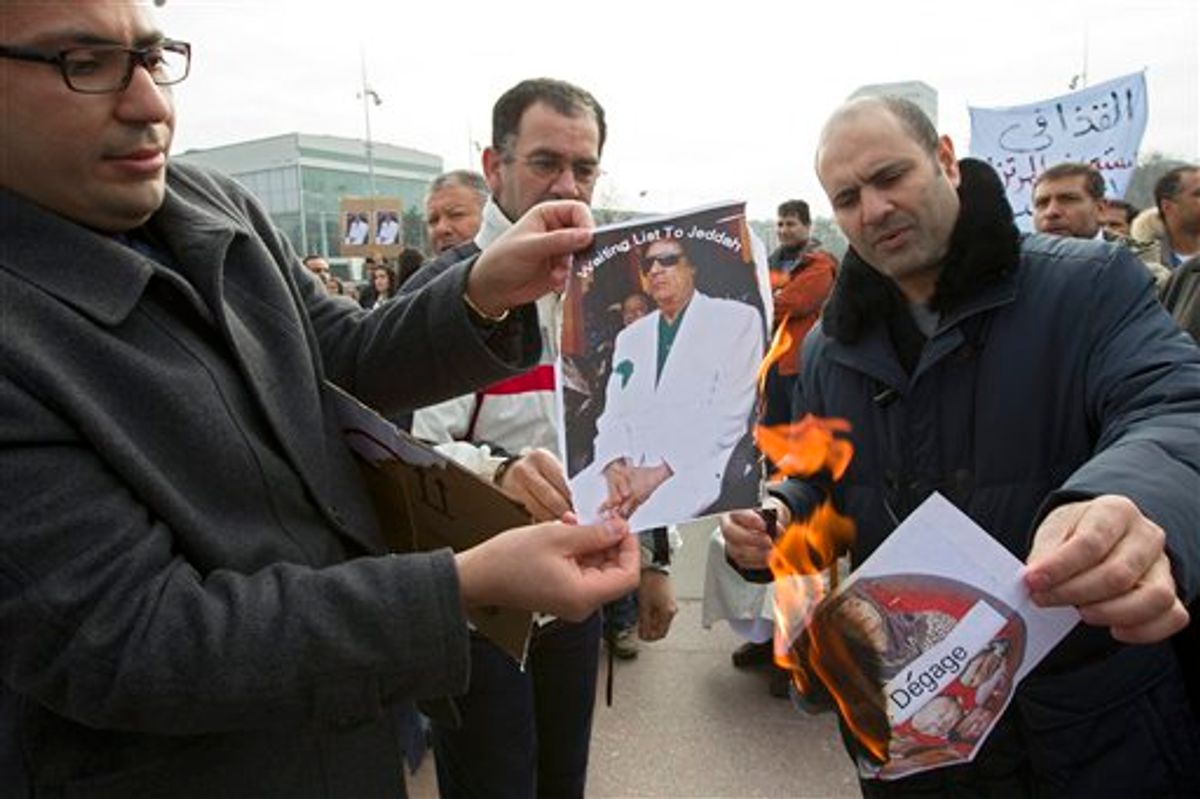 Libyan forces fired machine-guns at mourners marching in a funeral for anti-government protesters in the eastern city of Benghazi Sunday, a day after commandos and foreign mercenaries loyal to longtime leader Moammar Gadhafi pummeled demonstrators with assault rifles and other heavy weaponry. A doctor at one city hospital said his morgue had at least 200 dead from six days of unrest.

The doctor said his hospital, one of two in Libya's second-largest city, is out of supplies and cannot treat more than 70 wounded in similar attacks on mourners Saturday and other clashes.

The crackdown in oil-rich Libya is shaping up to be the most brutal repression of anti-government protests that began with uprisings in Tunisia and Egypt. The protests spread quickly around the region to Bahrain in the Gulf, impoverished Yemen, the North African neighbors of Tunisia -- Libya, Algeria, Morocco -- and outside the Middle East to places including the East African nation of Djibouti and even China.

Libya's rebellion by those frustrated with Gadhafi's more than 40 years of authoritarian rule has spread to more than a half-dozen cities. Benghazi has been at the center of unrest.

But getting reliable information about the chaotic situation is difficult. Journalists cannot work freely. Information about the uprising has come through telephone interviews, along with videos and messages posted online, and through opposition activists in exile.

Before Saturday's violence, Human Rights Watch estimated at least 84 people had been killed.

Jamal Eddin Mohammed, a 53-year old resident of Benghazi, said thousands marched Sunday toward the city's cemetery to bury at least a dozen protesters. They feared more clashes with the government when they passed by Gadhafi's residential palace and the regime's local security headquarters.

"Everything is behind that (Gadhafi) compound; hidden behind wall after wall. The doors open and close and soldiers and tanks just come out, always as a surprise, and mostly after dark," he told The Associated Press by telephone.

A man shot in the leg Sunday said marchers were carrying coffins to a cemetery and were passing by the compound when security forces fired in the air and then opened up on the crowd.

The latest violence in Benghazi followed the same pattern as the crackdown on Saturday, when witnesses said forces loyal to Gadhafi attacked mourners at a funeral for anti-government protesters. They were burying 35 marchers who were slain Friday by government forces.

The doctor at a Benghazi hospital said at least one person was killed by gunshots during the funeral march, and 14 were injured, including five in serious condition. He spoke on condition of anonymity for fear of reprisal, as did several other witnesses in Libya. He said some of the latest casualties were hit by machine gun fire.

On Saturday, witnesses told The Associated Press a mix of special commandos, foreign mercenaries and Gadhafi loyalists assaulted demonstrators in Benghazi with knives, assault rifles and other heavy weapons.

On Sunday, defiant mourners chanted: "The people demand the removal of the regime," which became a mantra for protesters in Egypt and Tunisia.

The U.S.-based Arbor Networks reported another Internet service outage in Libya just before midnight Saturday night. The company says online traffic ceased in Libya about 2 a.m. Saturday, was restored at reduced levels several hours later, only to be cut off again that night.

People in Libya also said they can no longer make telephone calls on their land lines.

Abdullah said smaller protests were staged Saturday night on the outskirts of the capital Tripoli, a stronghold of support for Gadhafi, but demonstrators were quickly dispersed by security men. Besides Tripoli and Benghazi, the U.S. State Department in a travel warning to American citizens listed five other cities that have seen demonstrations.

Supporters of the Libyan uprising also demonstrated in Switzerland and in Washington on Saturday, waving flags and burning Gadhafi's photo.