Wisconsin Senate to convene without Democrats this week 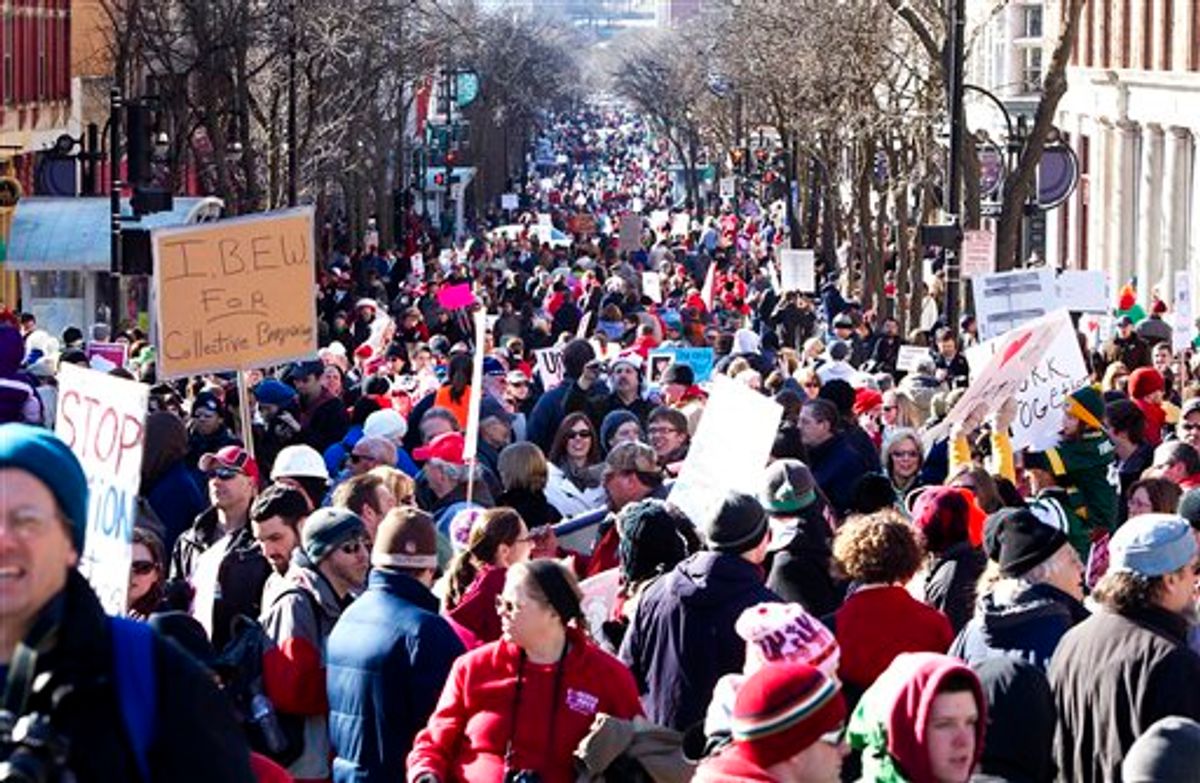 Protesters gather down State Street in Madison, Wis. after a a rally outside the Wisconsin State Capitol on Saturday, Feb. 19, 2011. A few dozen police officers stood between supporters of GOP Gov. Scott Walker on the muddy east lawn of the Capitol and the much larger group of pro-labor demonstrators who surrounded them. The protest was peaceful as both sides exchanged chants of Pass the bill! Pass the bill! and Kill the bill! Kill the bill! (AP Photo/Wisconsin State Journal, Steve Apps) (AP)
--

Wisconsin's senate majority leader says the chamber will convene to pass non-spending bills and act on appointments Tuesday even if minority Democrats remain out of state.

Republican Sen. Scott Fitzgerald told The Associated Press on Sunday that he would be reviewing which bills and appointees to schedule for action. He says senators can't wait around "twiddling their thumbs" until the Democrats return.

Fourteen Democrats fled to Illinois last week to delay action on a budget bill that would effectively eliminate collective bargaining rights for most public employees. Republicans need 20 of 33 members to have a quorum to pass any spending bill but only a simple majority of 17 for other items.

Senate Minority Leader Mark Miller says Democrats will not return until Gov. Scott Walker is ready to compromise on his labor proposal.

Gov. Scott Walker predicted Sunday that Wisconsin would lead states across the country in weakening unions that have negotiated compensation packages taxpayers can no longer afford while his opponents rallied for a sixth day in the Capitol in an attempt to avoid that fate.

Democratic lawmakers, union leaders and rank-and-file teachers and firefighters called on Walker to back off his plan to eliminate most collective bargaining rights for public employees. They argued the unions had already agreed to cuts in their health care and retirement benefits that could reduce take-home pay for many workers by about 8 percent, and it was time for the Republican governor to compromise.

In a Sunday morning interview from Madison with Fox News, Walker said he did not believe union leaders were really interested in giving up their benefits and cities, school districts and counties will need weakened unions to cut spending for years to come. With Democratic Senators still out of state to delay passage of the bill, Walker said he would not compromise and predicted that Wisconsin would pave the way for other states to follow suit, much like it did with welfare reform and school vouchers in the 1990s.

"We're willing to take this as long as it takes because in the end we're doing the right thing," Walker said.

The sweeping measure led to massive protests that started Tuesday and have gained steam including an estimated 68,000 people turned out Saturday. Most opposed the bill, but the day marked the first time that a significant contingent of Walker supporters showed up to counter-protest.

Hundreds of protesters gathered inside the Capitol on Sunday, as snow turned into freezing rain that made walking outside the building a challenge. The demonstrators banged on drums and danced in the Capitol Rotunda while they chanted, "This is what Democracy looks like" and "union busting!"

The crowd swelled throughout the day, but an estimate was not immediately available. Phil Neuenfeldt, president of the state AFL-CIO, told the crowd the protests would continue until the proposal was killed. Another large protest was expected Monday, when many state workers are being furloughed to save money.

Mariah Clark, an emergency medical technician at University of Wisconsin hospital and a volunteer firefighter, said she stands to lose $250 per month from her income with the benefits concessions. Standing on a bench holding a sign reading "EMT. Firefighter. Not the public enemy," she said the pay cut would hurt but that's not why she was protesting.

"I really believe this is about workers everywhere, not just public employees," said Clark, 29. "It's pathetic that in Wisconsin, one of the places where the labor movement started, that this would happen."

Jacob Cedillo Tootalian, a 27-year-old University of Wisconsin-Madison graduate student and teaching assistant, slept overnight in the Capitol for a third time this week as part of a union representing teaching assistants. He said he was worried about paying more for his health insurance and tuition, but what kept him protesting was the possibility of losing the union.

"Normalcy would be nice," he said. "But it seems the governor and the state Republicans are intent on taking these rights away."

The bill would require government workers to contribute more to their health care and pension costs and limit collective bargaining to pay increases less than the Consumer Price Index unless approved in a local referendum. Workers could not negotiate their benefits and working conditions. Unions could not force their workers to pay dues, and would face a vote every year to remain certified.

Walker denied the bill was an attempt at "union busting" and said the measure is needed to deal with the state's projected $3.6 billion budget shortfall for the two-year period that ends June 30, 2013.

He told Fox News he hoped the senators would return to work early this week.

Sen. Jon Erpenbach, D-Middleton, said in a telephone interview Sunday that the senators weren't likely to come back until the governor was willing to compromise.

Erpenbach said he remained at a Chicago hotel and his colleagues were "scattered" out of state. They had a conference call Saturday night, and Erpenbach said they remained united in their effort to stall the bill.

"It's trying to slow this train down," he said. "It's making sure that obviously everybody in the state knows what we're dealing with here. It's an opportunity for the governor to calm down, take a step back, realize what he's asking for with this legislation and hopefully come to his senses."

Erpenbach said Democrats have reached out to Walker's administration but their phone calls have not been returned. He said it may take a coalition of moderate Republicans in the Senate to try to negotiate an end to the stalemate.

One of them, Sen. Dale Schultz, R-Richland Center, has proposed suspending collective bargaining rights temporarily to get through the state's two-year budget, but then restoring them in 2013. That idea was endorsed Sunday by the Wisconsin State Journal, the state's second largest newspaper.

Erpenbach called Schultz brave for bucking Walker's administration with the proposal. Asked whether Democrats could accept Schultz's plan, Erpenbach said workers should not lose their rights since they have agreed to make concessions.

On Sunday, cornerback Charles Woodson, a member of the NFL Players Association, became the latest Green Bay Packer to back the public employees' cause. NFL owners and the players' union are locked in their own fight over a collective bargaining agreement. Along with Woodson, seven other current and former Packers have expressed support for the protesters.